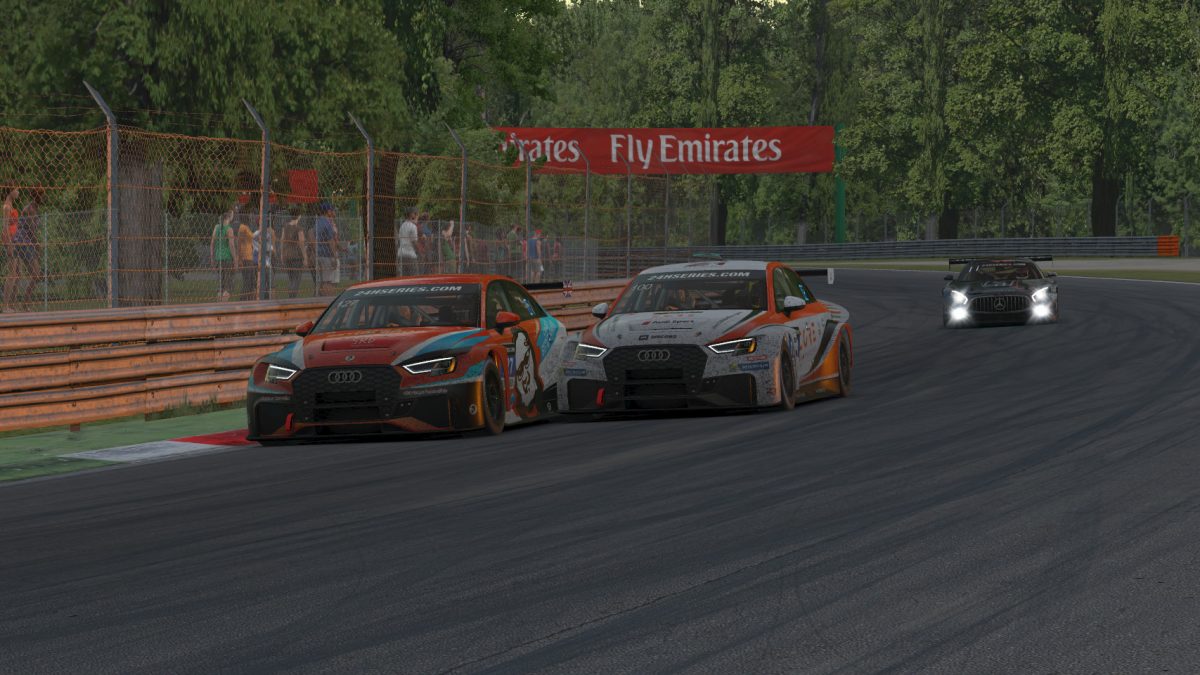 It was the clash of the TCR titans we had been waiting for all season: a head-to-head, wheel-to-wheel fight for victory between the two fastest touring car teams on the grid, complete with championship implications for each.

For CraigSetupShop, anything short of a win at this point would feel like an upset in their quest for a perfect season. Four for four entering last weekend’s 6H MONZA, they looked to add a fifth win and edge closer to the 24H SERIES ESPORTS title in the TCR class.

Their main rival since the early laps at Spa last October has been CoRe SimRacing, who has often led the draft trains but hasn’t been able to keep up with CraigSetupShop’s stint-long speed or time-saving pit strategies. After last month’s disappointing tenth-place result in Imola, a win at Monza almost seemed necessary for CoRe to keep any championship hopes alive.

But for those top two teams in the standings, their first big challenge would be getting to the front of the field. The draft-dominated qualifying session produced a surprise polesitter, as Dominic Ollivierre from Alpinestars Geodesic Racing used a well-timed run behind CoRe’s Thomas Gibson to take the top starting spot among the TCRs.

SimRC’s Claudius Wied qualified in second, with CoRe on row two in third place followed by Team Chimera’s Simon Trendell and then Jack Sedgwick for CraigSetupShop, who mostly ran without a draft in the 15-minute grid-setting session.

The start saw Ollivierre lead through turn 1 while Trendell was clipped by the ASTRO Gaming Altus Esports car entering the chicane. Spinning directly in front of Sedgwick, it nearly spelled disaster for CraigSetupShop just seconds into the race.

While they made it through that incident cleanly, they did lose a spot off the start to Djawad Karoni of Satellite Racing, and for most of the first stint, Sedgwick rode in the middle of the TCR train while Geodesic led the way.

The lead finally changed hands on lap 22 as Jürgen Frank powered past Ollivierre out of the first chicane. By that point, the top three — SimRC, Geodesic, and Satellite — had opened a small gap over CoRe and CraigSetupShop, but a bit of poorly timed traffic helped bring the lead pack of five cars back together before the first round of pit stops.

In the second hour, the points leaders were on the rise. On lap 44, a turn-1 slowdown for Frank let Gibson sneak past into the lead, while Sedgwick was up to third and ahead of the shuffled running order behind him.

That may have helped them avoid another accident, as just two laps later, a three-wide multi-class race into Parabolica saw fourth-place Moritz Löhner from Williams Esports get hip-checked off the track by a GT3 car and ultimately out of the race.

But CraigSetupShop couldn’t breathe easy yet. Later in the stint, an incident in the same corner nearly claimed their Audi RS 3. Contact from the GOTeam Racing 991 sent Sedgwick for a half spin and dropped him to fourth.

Instead of charging into the lead on worn tires like we’ve seen often this season from CraigSetupShop, they were slipping back, and CoRe’s Gibson was the one opening a gap to second-place.

And once teammate Kimmo Suominen got behind the wheel, CoRe’s advantage grew even greater: up to 15 seconds over Simeon Lynch, who fought past SimRC’s Felix Luding and a speedy Oriol Bohé from MSI eSports to move CraigSetupShop into the top two by the midpoint of the race.

By that point, the draft wasn’t dead yet, but the field had certainly been fractured. The nine-car train from the first stint had been reduced to at most three TCRs running together — in that case, following Lynch in second place.

Elsewhere, it was every man for himself as the drivers tried to match Suominen’s blistering pace; statistics compiled by Sascha Lamp and David Barraclough show that both CoRe drivers ranked in the top three fastest at Monza based on median lap times.

But that doesn’t mean that they were bulletproof. Just past the halfway mark, CoRe’s chances took a hit — literally — when they were sent spinning in turn 1 by the Gold Racing Team Porsche.

After hopping a sausage kerb and getting the car pointed in the right direction, Suominen had lost the lead as the Lynch-led trio drove past.

With Lynch defending the newly inherited race lead and CoRe looking to come from behind, the fourth stint of the race became a consequential one, and it started with a first-chicane slowdown for Lynch that dropped him to third and into CoRe’s clutches.

Suominen got by on lap 101 and leapfrogged into the lead just two laps later, kicking off a back-and-forth battle with Bohé for the top spot.

As the race entered the final two hours, it was advantage CoRe up front, but with the top four bunched back together, it was anyone’s race to win — or lose.

With Gibson back behind the wheel for the final two stints, he again opened a lead for CoRe, but even with 10 seconds over third-place CraigSetupShop, no one could count Sedgwick out, especially with one pit stop left to make.

True to form, that pit road magic was again on display at Monza. Sedgwick was the last of the leaders to pit, a full seven laps after CoRe came in, and the difference was an astounding ten seconds on the stopwatch.

That gave CraigSetupShop a narrow lead that closed in even more with Gibson in the draft. The final 15 laps became a classic touring car battle, with the top two on track running bumper-to-bumper or, at times, door-to-door.

Inside the final ten minutes, Gibson finally got by down the frontstretch, but Sedgwick retook the spot through Curva Grande.

It was part of an incredible three-lap span that saw the two unabashedly banging wheels, running side-by-side through Monza’s tight chicanes, and use every bit of the road in search of racing room.

Perhaps it was only inevitable that such a close battle wouldn’t stay that way for long. With three laps to go, the two drivers entered the turn-1 braking zone side by side, and while Gibson drove in deep, Sedgwick turned in to hit the apex and instead hit CoRe’s left rear corner.

The contact sent Gibson spinning for the second time in that corner during the race, and unlike their earlier incident in Porsche traffic, there was no hope of closing the gap with such little time left.

Their only hopes rested with the officials, who committed to a post-race review of the incident. Once that ruling was handed down, stewards noted that CoRe was “negligent” by missing the corner, but no penalty was handed to either team.

It was their closest challenge of the season, and they had to wait a few extra days before they could celebrate, but CraigSetupShop prevailed and extended their incredible winning streak despite rarely having the fastest car on track all afternoon.

CoRe crossed the line in second place for the fourth time this season, denying them a possibly deserved — but not earned on the track — victory.

The fight for third was also a close one in the late laps, and it came down to just a carlength for MSI’s David Pérez to edge Wied across the finish line. While MSI’s TCR team has run much of the season in the shadow of their undefeated 991 teammates, they have been consistent in their own right, with no finishes worse than sixth and now a podium to their credit at Monza.

The race for fifth also came to blows in the closing laps, as Chimera and Geodesic endured a door-banging, grass-clipping, kerb-hopping fight through the Variante della Roggia chicane inside the final 20 minutes.

Chimera’s Jamie Wilson came out ahead in that scuffle, and a further ruling by officials deemed Ollivierre responsible for the initial contact, although he was not penalized and ended in sixth. Apex Racing Team was within sight of the leaders for much of the race, but couldn’t quite close the gap and finished a relatively lonely seventh with no other TCRs around them.

Satellite’s Karoni appeared to be cruising toward a fifth-place result, but his role in contact that spun the Huber Racing E-Sports Porsche and nearly collected the 991 leaders from MSI earned a post-race time penalty of 65 seconds, which dropped the #112 car to eighth.

A pair of incidents in the first hour for Beau Albert kept Altus buried near the back of the field, and teammate Alexander Lauritzen struggled to claw back positions late in the race, leaving them in ninth.

It was also a long afternoon for Torque Freak Racing. Among the first teams to lose the lead draft, their trio of Tim Claessens, James Ewens, and Georg Gruber soldiered on for a tenth-place result.

And while their position as the last car classified may not warrant many accolades, Team MAD certainly deserves credit for adapting to some difficult circumstances and still completing all six hours. Scheduling issues and illness sidelined their usual drivers, so commentator Paul Smith and chief engineer Maciek Sakowicz stepped up to keep the #136 on the grid and in the race.

The sole retirement in the 12-car TCR field was Williams after their second-stint tangle in traffic.

Contact certainly played a role in the race, from the back of the field to — especially — the front. The closest race this season in the TCR class didn’t disappoint, except perhaps to CoRe SimRacing.

But they’re still mathematically alive in the championship fight, and with one more race win on the line as well, we can only hope to see more of the same fender-bending action in next month’s season finale at Barcelona.

Hours of Practice, a Year of Waiting Rewarded with MSI's First Title