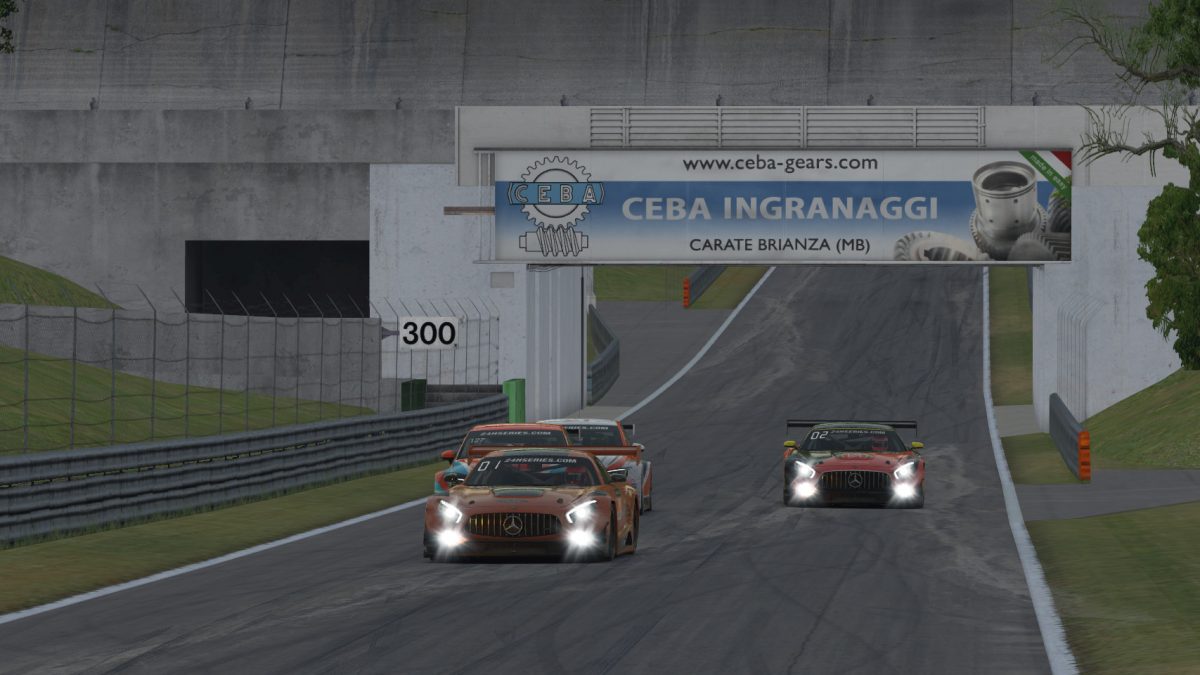 A dash of drafting, some close-quarters contact, a mix of strategy, and plenty of speed decided Sunday’s 6H MONZA, which left one team celebrating a class championship while the other title fights heated up with one race remaining in this 24H SERIES ESPORTS season.

The coronation came in the 991 class, which saw MSI eSports moved from second on the grid into the lead on lap 1 and never look back. The duo of Alejandro Sánchez and Marc Pérez earned the team’s fifth win in five races this season ahead of second-place Chartwell Racing.

As MSI moved forward in the early laps, Burst Esport found itself mired in the midfield and ultimately out of the race after an incident forced their retirement.

Burst had been MSI’s closest competitor in the standings, but their DNF combined with another maximum-points afternoon tentatively gave MSI a 55-point lead over TRITON entering next month’s season finale at Barcelona.

Even with double points available in that event, MSI can’t mathematically be caught, so the most dominant team on the grid this season has rightfully earned their first NEO-sanctioned championship, pending the official confirmation of the results later this week.

In the other two classes, the titles remain up for grabs after an at-times wild race at Monza in which the leading teams in both the GT3 and TCR classes made contact in the closing laps.

The GT3 and overall victory was set to come down to a collision course between strategies, but instead, one contender’s race ended with just a collision.

Biela Racing Team EURONICS’ #45 team double-stinted tires on their first pit stop to take the lead, and they held the top spot late in the race with only a splash of fuel needed before the finish.

Before then, though Sven Haase clipped the grass exiting the Variante della Roggia chicane and bounced off the inside armco barrier, putting the Spa winners out inside the final hour.

That put the race in the hands of Ronin SimSport and the class polesitters from Mivano Simracing Team, who each used a more standard five-stop strategy plus plenty of horsepower in their Mercedes AMG GT3s to stay at the front of the field.

While Ronin’s Filip Mitrevski edged ahead from Mivano’s Tommaso Carlà with a quicker final pit stop, traffic and Carlà’s pace helped close the gap back down in the final laps.

Their battle came to a head in the della Roggia chicane, as contact from Mivano spun Ronin into the wall. Mivano continued with Carlà and teammate Dion Fiallo crossing the line in first — returning the team to victory lane for the first time since their P1 Le Mans win last season — but officials were set to debate the outcome after the race.

A decidedly less-controversial third-place finish went to SRC Squadra Corse, who made it a Mercedes sweep of the podium.

While the class victory remains in question, so does the GT3 championship, and we’ll have to wait more than a month to get that answer.

The points leaders from Williams Esports qualified only fifteenth and finished sixth, so despite Biela’s problems, the title isn’t yet secured heading into Barcelona. Both Biela and Ronin will enter that race within 12 points of Williams.

In the TCR class, the draft kept the field together early on, but as we’ve seen throughout this season, the cream eventually rose to the top.

In this case, though, it was CoRe SimRacing controlling the pace through the middle stages of the race after nearly flawless drives by Thomas Gibson and Kimmo Suominen, and they stretched up to a ten-second gap over CraigSetupShop.

But the strength of Jack Sedgwick was again on display, as his faster final pit stop helped him close that gap and set up a classic Monza-style draft battle between the two teams to decide the race.

After trading the lead multiple times in the late laps, contact entering turn 1 saw CoRe spin and Sedgwick continue to take the tentative win. However, like in the GT3 class, that result is under review by the stewards this week.

One finish that’s more certain is MSI’s third-place in the TCR class — their first podium of the season at the hands of Oriol Bohé and David Pérez.

With a fourth-place finish in the GT3 class, it was an overall successful day for the team at Monza.

Stay tuned to neo-endurance.com in the coming weeks for additional coverage of the race, including team and driver insights and class-by-class race recaps.