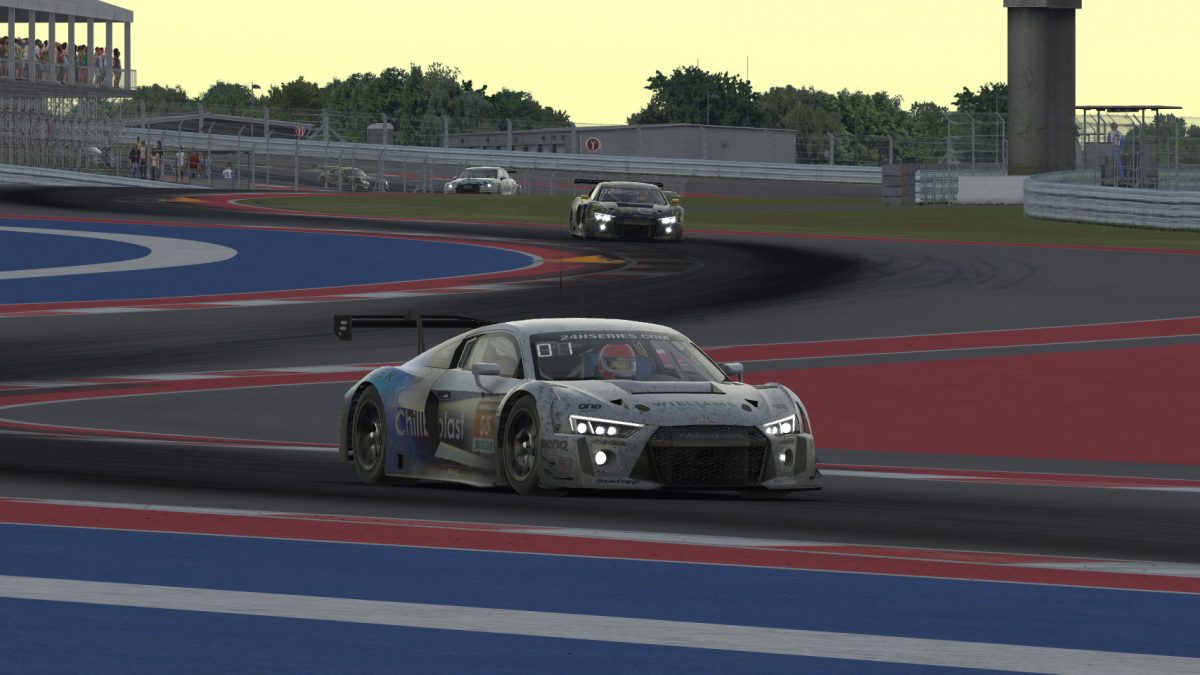 The wide open spaces at Texas’ Circuit of the Americas played host to tight battles and car-on-car contact to decide the top positions in Sunday’s 6H COTA, the second race of the 24H SERIES ESPORTS championship.

The overall and GT3 class victory came down to a close race between Williams Esports and Biela Racing Team EURONICS. Kay Kaschube and Lukas Jestädt traded fast laps on the cooling track, but Jestädt’s consistency had him within a second of the lead in the final hour.

With just four laps to go, Jestädt broke late at the end of the backstretch and collided with Kaschube in turn 12. Whether it was a desperation dive or an untimely misjudgment with time running out, Jestädt gave the position back and couldn’t close back in to challenge for the win.

That sent Kaschube and Dominik Staib to victory lane, building on their runner-up finish at Spa in which they had winning speed but also several execution errors that cost them a minute in penalties.

The Spa winners from Biela’s #45 team finished second, pending a post-race investigation into the late-race contact.

The race for third-place was also decided in the closing laps, and it also ended with contact. Mivano Simracing Team and Sorg Rennsport eSports had been bumper to bumper for much of the final hour, but when they touched in turn 2, Williams JIM Esports’ Moreno Sirica passed them both to take the final podium position.

The saying “everything is bigger in Texas” was certainly true of the winning margins in the 991 and TCR classes, which both featured returns to victory lane for the Spa winners.

MSI eSports dominated in the Porsche 911 GT3 Cup field, as Marc Perez put the car on pole and Salva Talens made his long-awaited debut for the team to help secure their victory.

A minute and a half behind them at the checkered flag was Burst Esport, who overtook third-place DV1 TRITON Racing during the final pit stop while the #999 car was serving a costly 5-second penalty for earlier contact.

The TCR train was split up early in this race, and as at Spa, the leading locomotive-turned-sole survivor was CraigSetupShop. Jack Sedgwick and Simeon Lynch looked comfortable up front all race, and after passing CoRe SimRacing in the second hour, they never looked back en route to their second consecutive win.

CoRe was second in class while SimRC made an impressive march through the field from fourteenth on the grid to earn the final podium position.

Stay tuned to neo-endurance.com in the coming weeks for additional coverage from COTA, including team and driver insights and class-by-class race recaps.