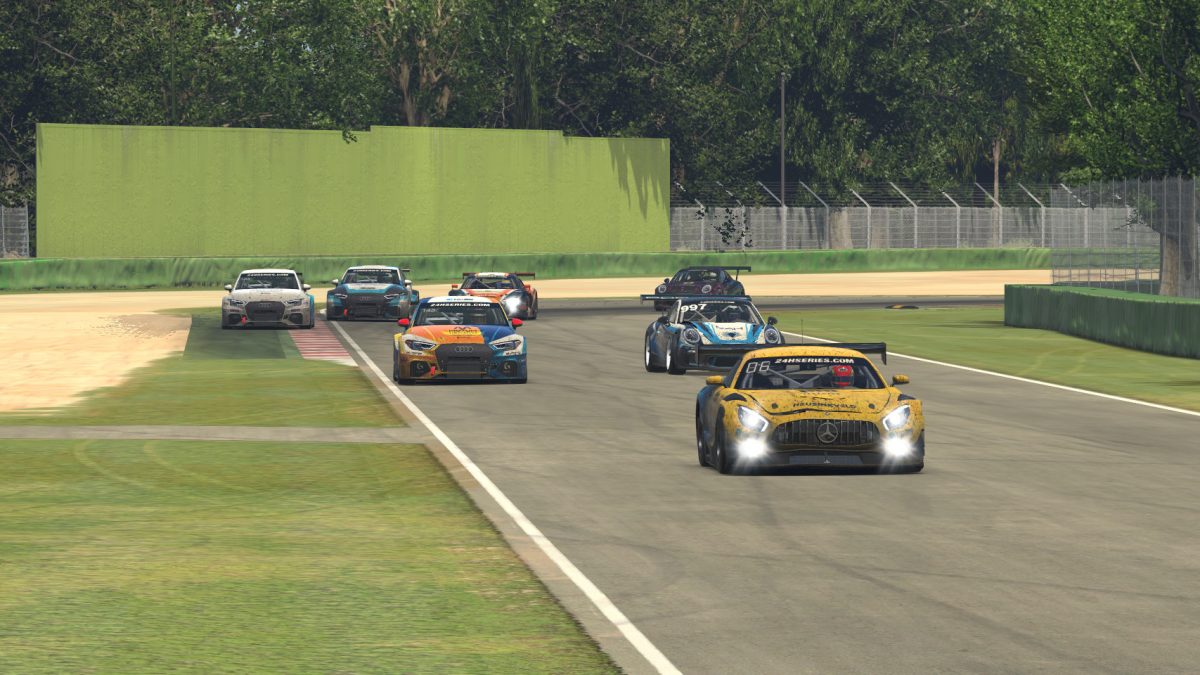 This month’s roundtable discussion with 24H SERIES ESPORTS competitors looks back to the recent 6H IMOLA and checks in on the championship battles in all three classes.

Did the tight confines of the Imola circuit create any unexpected issues in traffic?

Anders Dahl, #911 Burst Esport: It was definitely a tough challenge, but I don’t think it was worse than the other tracks we have visited. The GT3 class is really pushing through every time, which is understandable given the time lost behind us slower classes, but it feels really dangerous in some situations. They can force an overtake and the only way we can avoid an incident, is to completely give up our line.

Miguel Freitas, #136 Team MAD: There were a lot of unexpected moments, but in a tight track like this one, that should be expected. The margin between a seamless overtake or a big crash is very thin, but in the end, I think the field showed that with some patience from all classes, we could have world class racing!

Joakim Vennström, #907 GOTeam Racing: We prepared well for the issues that we could expect and made it through the traffic quite well. But we saw a lot of our competition involved in incidents and that helped us to get our best result so far.

The Williams Esports GT3 team avoided a penalty after their contact with the CoRe SimRacing TCR. Was it the right call based on CoRe’s admission that they tapped the brake and there was a miscommunication between teams, or does the faster car — in this case, Williams, who had all four tires outside the white line when the contact happened — still have responsibility to make a clean pass?

Michael Drechsler, #88 Huber Racing E-Sports: My personal opinion on that situation is that CoRe wasn’t holding their line, which made them unpredictable for Williams. Because Williams was so close, there was almost no way for them to avoid the incident. Props to CoRe for admitting their mistake and taking the blame.

Miguel Freitas, #136 Team MAD: I don’t like to comment on decisions already made by race control in this series as they usually give very good explanations on why they made a certain decision. What I can hope is that in other sketchy incidents, they talk to the teams to try to understand what happened. That way we keep all decisions consistent.

With two races remaining this season, how many of the current points leaders will hold on to win their class championships? Which team besides these three has the best chance to come from behind and pull an upset?

Michael Drechsler, #88 Huber Racing E-Sports: With MSI and CraigSetupShop dominating their classes (991 and TCR) I think there is no place anymore for others trying to compete for the championship, unless some miracles happen. In the GT3 class, I expect a very close battle between Williams and Biela Racing Team EURONICS for the last two races. Maybe even Williams JIM Esports and Ronin SimSport will get a chance to fight for the championship!

Anders Dahl, #911 Burst Esport: I don’t see us or anyone else challenging MSI for the championship, but we keep building our pace and perhaps we can challenge for a race win.

Miguel Freitas, #136 Team MAD: I don’t believe that we will have any surprises in our class. CraigSetupShop has been dominant every race and I believe it will stay that way. But, if for some reason they get unlucky in the next two rounds, it will be an interesting battle between Core and SimRC!

Joakim Vennström, #907 GOTeam Racing: In the Porsche class, MSI have been very dominant, and I wouldn’t bet on some other team taking the win. But Barcelona has double points and that will keep the championship alive.

Looking ahead to Monza, how much will the draft affect the competition?

Michael Drechsler, #88 Huber Racing E-Sports: It will definitely be interesting. Draft will affect the competition quite a lot, especially not losing it while overtaking slower classes to be able to keep fuel saving. I expect a very tactical race for the GT3 class.

Miguel Freitas, #136 Team MAD: Draft will dictate how teams can come up with different strategies, and we might see slower cars staying behind the leaders in their class all race long! So teams that manage to keep in the draft of faster cars will surprise the rest of the field, as being fast and saving fuel is the way to go around Monza!