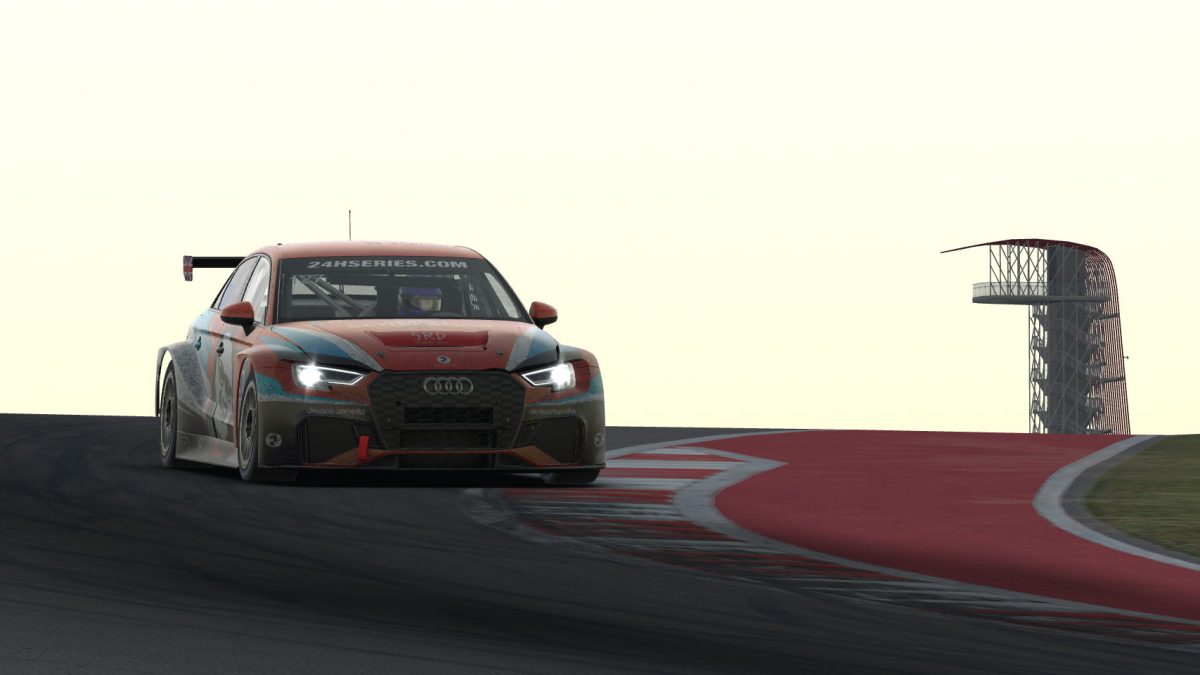 Ever since the final ties were laid on the Union Pacific railroad, the American west has been filled with tales of runaway trains barreling across the landscape, and wanderers in the wilderness sometimes swear to hear the horns of those rogue rail cars off in the distance.

For drivers in the 24H SERIES ESPORTS’ TCR class this season, their nightmares may be haunted by a different sort of runaway: one team with the speed and skill to run away from the train of draft-locked TCR cars.

At Spa, the eventual winners from CraigSetupShop had to survive a nearly race-long battle with the likes of CoRe SimRacing and a late penalty that lead driver Jack Sedgwick had to overcome in order to finish up front.

In last weekend’s round at the difficult Circuit of the Americas, Sedgwick and teammate Simeon Lynch made their road to victory decidedly less bumpy. That began with a pole position as Sedgwick edged CoRe’s Thomas Gibson by 0.010 seconds in qualifying.

While first-lap contact between ASTRO Gaming Altus Esports and MSI Esports threatened to break up the battle, there was still a 13-car TCR train rolling around the virtual Texas circuit in the early laps.

Traffic and a bit of contact along the way eventually fractured the field, though, and by the end of the first stint, just six cars were left in the lead pack. Sedgwick and Gibson paced Jamie Fluke from Apex Racing Team, Jordan Deschamps from Williams Esports, Juan E. Lopez from Vendaval Simracing, and Brian Lockwood from RaceKraft Esports.

As the first round of pit stops approached, Gibson made a move, drafting past Sedgwick down the backstretch on lap 32 to put CoRe into the lead.

Two laps later, the two pitted together and Gibson held the position, but it didn’t last long. When Gibson ran wide in turn 1 on lap 39, Sedgwick pounced and retook the top spot. From there, his lead ballooned to eight seconds before he handed over to Lynch and Gibson gave way to Carl Jansson in the CoRe Audi RS 3 LMS TCR.

After breaking free of the draft, CraigSetupShop flexed its muscle. Lynch drove the remaining three stints, setting the fastest lap in class along the way that was a full six tenths quicker than the next best time.

That pace helped the lead swell to 40 seconds at the checkered flag — an almost unheard of margin in the TCR class that we thought could be decided by tenths, not dozens, of seconds before the season began.

Despite COTA’s multiple long straightaways, its many tight corners combined with traffic and the TCR tire wear all seemed to split up the field more than we saw at Spa.

CraigSetupShop and CoRe were a clear 1-2 for most of the race, but there were some close battles behind them for third. During the second stint, Altus’ Tuomas Tähtelä got past Fluke for third after many laps of trying and an entertaining wheel-to-wheel fight through the stadium section.

However, shortly after making that pass, Altus’ race came to an end when they were caught up in a collision between the TRITON Racing GT3 and one of the Williams JIM 991 cars.

That then put Apex back up to third, but they encountered their own issues when they spun exiting turn 15 on lap 110. After nosing into the armco barrier, they lost two spots and their shot at a podium.

The third-place position that seemingly no one could hang on to went to an unlikely team, at least based on the qualifying results. SimRC started in fourteenth and were hit by a 991 car during the first stint, but Jürgen Frank and Felix Luding made steady progress all race and were up to third after their final pit stop. They crossed the line 25 seconds behind CoRe, who finished second.

The best battle in the closing laps was for fifth place. Jamie Wilson from Team Chimera held the spot while Víctor Lobato López from MSI chased him down. With 20 minutes to go, the two went side by side for the entirety of COTA’s final sector — all while faster traffic was blowing past them — before López came away with the spot.

Chimera was left in sixth, but it was still the team’s best NEO finish since March 2018, when they placed fifth in the season four finale at Le Mans.

COTA also featured a strong showing for Satellite Racing’s #112 team. After qualifying fifteenth out of sixteen cars in class, Janne Hautamäki put in an impressive drive to get the team inside the top ten during his race-opening double stint, passing the likes of Williams’ Moritz Löhner as he moved through the field. Djawad Karoni finished the job for Satellite, moving up to seventh by the finish.

While RaceKraft ran among the leaders early in the race, technical trouble in the unlucky number #113 Audi dropped them back to back to eighth, and to keep that position, they had to survive a last-lap side-by-side battle with Team MAD that saw some door-banging and kerb-hopping coming to the finish.

The final top-ten spot belonged to Williams for most of the final hour, but Jack Keithley had to bring the #133 car to pit road with just three laps to go for a splash of fuel. That elevated Alpinestars Geodesic Racing into tenth and Torque Freak Racing into eleventh while Williams slipped to twelfth.

Satellite Racing’s sister car, the #111, finished thirteenth after Ferris Stanley traded the position with Sorg Rennsport eSports’ Rene Kierchhoff with an hour to go. Sorg ended up in fourteenth, hamstrung for the second race in a row by a penalty for exceeding track limits.

After their mid-race collision in traffic, Altus failed to finish. They were joined on the sidelines by Vendaval, whose car was also damaged in contact with a Porsche.

While those one-time contenders saw their races slip away, the leader drove away from the field. Two races into the season, one team has a stranglehold on the TCR class, dooming the dreams of anyone who hoped for race-long draft battles with different winners every round.

Like a runaway train, CraigSetupShop has momentum on their side, and it will take a big obstacle to slow them down at this point.