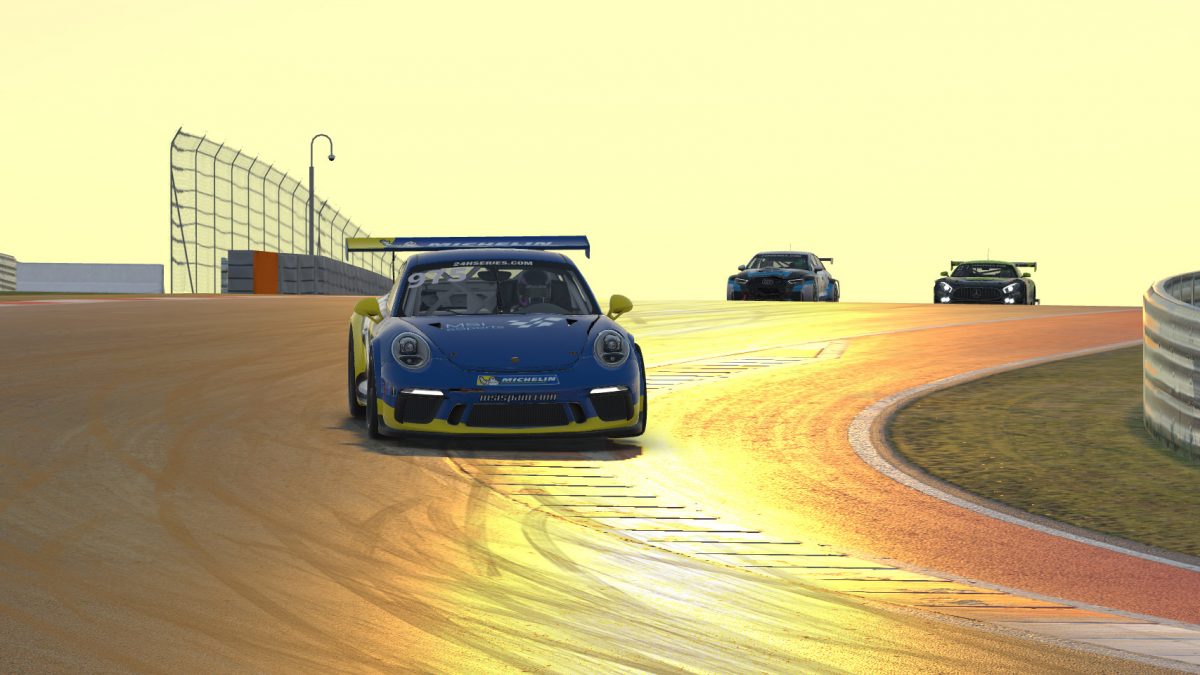 An old adage says “it’s better to be lucky than good”. For teams in the 991 in class in this season’s 24H SERIES ESPORTS championship, it has become clear that they need to be both to beat the clear frontrunners from MSI Esports.

After a dominant season opener at Spa, MSI picked up where they left off at Circuit of the Americas last Sunday. Marc Perez was impressive in qualifying, taking the pole with the only Porsche lap in the 2:07 bracket.

The race brought more of the same: MSI in its own league while the rest of the 991 field just tried to survive behind them.

That struggle started at the drop of the green flag. Perez made a clean break from the front row while second-place Dawid Nowakowski from DV1 TRITON Racing was spun entering turn 1 by the Inertia SimRacing Porsche.

The resulting melee also sent fourth-place Williams JIM Esports Cup for a spin, sixth-place Chartwell Racing up on two wheels, and several other cars running wide to avoid the incident.

By the time the field entered the esses, Perez already had a two-second lead over Evan M. Marion from Burst Esport, and MSI’s advantage would only increase from there.

Traffic proved especially tricky for much of the Porsche field, often stuck in multi-class sandwiches with slower TCRs and faster GT3s. Turn 12 was a particular trouble spot as the high-speed backstretch funneled through a downhill braking zone to one of the track’s slowest corners.

The first pileup happened on lap 15. Negotiating the tight radius of the turn caused Gold Racing Team to collide with the Alpinestars Geodesic Racing TCR on exit, setting off a chain reaction that collected IRDK Endurance.

On the next lap, GOTeam Racing dove up the inside of the Huber Racing E-Sports Porsche and speared the SimRC TCR. Huber’s 991 then clipped them as they sat in the middle of the track.

That road hazard that also caused a spin for SRN Motorsports when they checked up for the incident. It was their second spin at the corner in a two-lap span after a lockup under braking the previous lap.

Another incident in the first hour saw Williams JIM Esports Cup M’s #908 Porsche ramp off one of the raised kerbs in the esses and collide with F4H Racing.

Between those early incidents, at least half of the 991 field had some sort of damage before the first pit stop.

Even after the field spread out, it didn’t get much easier from there, Porsches were pegged for 14 stop-and-hold penalties in total during the race, including several for braking-zone bump-ups or a mid-corner loss of control as the GT3 Cup cars struggled to negotiate COTA’s downforce-favoring sections.

While the incidents and penalties further spread the field apart — MSI had a 25-second lead after the chaotic first stint alone — there was still some close racing, especially as teams recovered from spins and moved back up through the field.

One of the most impressive passes of the race was by Guillem Escuder late in the first stint. While TNT Racing and Avid Chronic Racing passed a TCR car entering turn 11, Escuder from Williams JIM Esports Cup drove in deep and passed both Porsches in one corner to take third place.

The battle continued behind him, but not for long, as a three-wide move on another TCR ended with a spin for Avid Chronic’s Norbert Leitner in the stadium section.

Recovery drives were the theme of the middle portion of the race. Avid Chronic fell to seventh after Leitner’s spin, but teammate Jeremy Lamier passed Chartwell to move the #902 car back inside the top five by the three-hour mark.

Huber Racing’s comeback from its own early incident had them as high up as sixth before a penalty dropped them back to tenth.

And after his lap-one spin, Nowakowski elevated TRITON back to second place by the end of his race-opening triple stint.

Late in the race, close fights were tougher to come by for the already battle-scarred Porsches. But not reluctant about trading paint after the early incidents, Inertia and Williams JIM Esports Cup banged doors while racing for fifth place inside the final hour, with Escuder — perhaps the boldest Porsche driver of the day — ultimately taking the position.

TNT Racing spent most of the race in the mid-pack and had a back-and-forth battle with SRN for eighth. Paul Darling ultimately came out on top of that one.

TNT is also the answer to a trivia question from this race: they were the only team besides MSI to lead in class when Darling stayed out an extra lap during the first pit stop sequence.

The short list of names to pace the Porsches is another testament to MSI’s dominance. Never challenged on pace during the race, Marc Perez and off-season addition Salva Talens were the top two 991 drivers based on almost every speed metric.

Leading by a minute and a half at the finish, they showed poise in traffic, finesse in driving, and pace in all parts of the race en route to the victory.

Second place came down to pit strategy and — fittingly in the Porsche class — a penalty. Burst made an early final stop to put Anders Dahl on fresh tires while TRITON waited 13 more laps before bringing in Piotr Jagodzinski for only a splash of fuel.

However, a five-second penalty to TRITON for an earlier collision with a TCR cost them the position, leaving Burst in second while TRITON finished third.

After their early spin, Avid Chronic managed a literal turn-around to move up to fourth. Williams JIM Esports Cup’s late pass gave them fifth place while Inertia was sixth. Huber also bounced back from their first-stint contact to finish seventh, while TNT took eighth over SRN.

Neither GOTeam Racing or Gold Racing Team could fully recover from their own incidents and penalties, leaving them tenth and eleventh. Collateral damage to IRDK Endurance also sent them down the order, and they finished seven laps behind the class winner in thirteenth.

After extensive repairs, F4H Racing was thirteenth and the final points-scorer in the class. Chartwell fell out after a turn-one spin and contact with a TCR with two hours to go, while Williams JIM Esports Cup M and SuperSport Racing also failed to finish.

Plenty of Porsche teams may look back on the COTA race and worry that they were neither lucky — with many involved in incidents or plagued by penalties — or good, at least compared to the class leaders from MSI.

Worse still for the field, MSI didn’t need any luck like they did at Spa to survive their hit with the Blanchimont tire barrier. At COTA, MSI’s Porsche seemed to carve through traffic effortlessly, and perhaps even more impressively, they did it all without their Porsche Esports Supercup ace Alejandro Sánchez.

If this domination keeps up, the rest of 991 class may need to call 9-1-1 and hope someone can revive their championship chances this season.