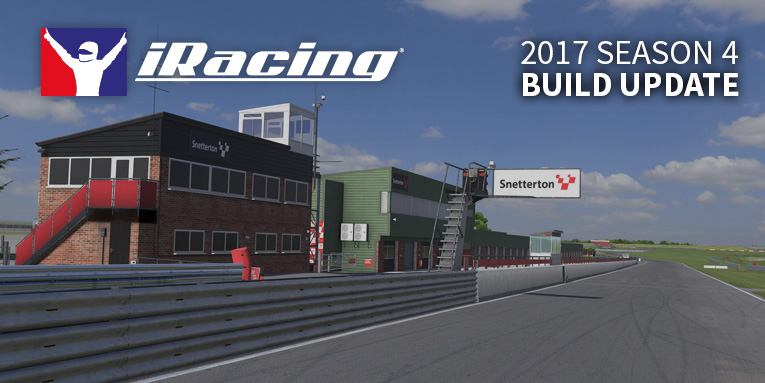 It’s September again. This means two things: the start of the new NEO Endurance Series (NES) season is close and a new build for iRacing. The developers at iRacing have worked hard to roll out another great update for its members.

In this build iRacing releases four new pieces of content: two cars and two tracks. On the road side we welcome the GT3 spec Ferrari 488. At a first glance there is not a lot of differences between the GT3 and GTE cars. Besides the performance is the color of the headlights the most notable difference. The GT3 class has a nice variety of cars now with the addition of the Ferrari 488.

British circuit Snetterton will be released this build as well. Snetterton is located in Norfolk, England, and opened in 1953. However this circuit doesn’t host international events, it a fairly well known circuit. It is mainly well known for hosting the BTCC, British GT, British Superbike, and British Formula 3.

On the oval side there is new dirt content. In the real world Lanier National Speedway does not exist anymore. Luckily the spirit of LNS lives on in iRacing. This build iRacing brings this short track back to its roots, by releasing a dirt version of the track. The first five years, after it opened in 1982, LNS was a dirt track. Together with this dirt oval, iRacing also releases a new dirt car: UMP Modified.

This build also has a handful of fixes to the simulator. Here are the most notable ones.

When you are a not a members yet, iRacing has a great deal for you! Together with McLaren’s World Fastest Gamer competition, iRacing now has a special offer for new members:

You get all this for $49. That is a 70% discount off the regular price.
Use promocode PR-MCLARENWFG and claim this great offer now.

Read the full release notes below.

Updater
The iRacing updater will no longer ask if you want to create a desktop shortcut if it already exists.

Garage
Bar end displacement has been adjusted for some cars in the Garage UI.

Dynamic Track
The visuals for marbles have been improved.

Fixed an issue whereby a Lone Qualifying session would trigger an error that made some parts of the track on a client unable to send all updates to the server in any sessions which followed, such as an attached race.

Rendering
The number of fixed cubemaps rendered per frame has been reset to 0.

The option, “forceCrowdVisible” has been added to the [Graphics] section of the “app.ini” file.

Camera
Fixed a bug that accidentally allowed the track camera option “Limited Acquire” to be toggled on for on-car and driving cameras.

A new sound event script system has been implemented that allows for more customization of sounds. This is the new base for all event driven sounds in the SIM, and will allow us to add in environmental sounds in the future, including linking sounds directly to animations.

Re-tuned engine and transmission sound parameters for drivetrain loads for all cars. This gives a more dynamic sound with throttle changes as you modulate the delivery of power. Even slight throttle movements will yield more informative sonic responses.

Tuned the rumblestrip and grass rolling volumes for quieter vehicles. Tire surface sounds have also been adjusted and are likely a little on the loud side. This is to cater for users with speaker combinations and those soundcards that play them quiet. Reduce the tire volume slider to taste. The cars affected include the following:

Fixed a bug in the particle sounds and visor dirt sounds that could cause them to be too quiet for some cars.

Pace Car
The pace car’s line for entering and exiting its pit stall has been improved.

Fixed an issue where some dirt areas along walls could look patchy.

Replay
Several small replay processing and playback enhancements to increase the accuracy of the dynamic track in a replay.

When playing a replay, the play speed will remain unchanged when playing a frame where the player steps into the car, or is the start of a new session. Previously this would trigger an event that would drop the replay out of fast-forward and into regular play speed.

Chat
Fixed a bug that caused the right-click menu to not work on small chat window.

Virtual Reality
Fixed an issue causing a white flash when transitioning out of a session.

Telemetry
New irsdk variable “CarLeftRight” that outputs a irsdk_CarLeftRight enum indicating if a car is on your left or right. This can be used to replicate our high/low spotter calls.

New irsdk Session String parameter WeekendInfo:TrackDirection: that indicates if the track is a left or right (or neutral) handed track. Use this to detect that you are at a reversed oval so you can properly call high when the car is on your left rather than right side.

Fixed the output of car setup to telemetry to not strip numbers from the key names.

New iRacing UI Preview
UI Scale: You can scale the entire UI up to 200%.

You are now able to “Star” cars, tracks, Series, and Time Attack Competitions.

Cart: You can add cars and tracks to a new shopping cart located in the top right corner. Clicking “continue” lets you check out at the Classic Membersite.

A host of Series Racing upgrades, including:

When you try to Register for a Series with multiple cars or classes without first selecting a car, the UI should force you to download the content first.

BMW Z4 GT3
Fixed an issue with the side mirrors disappearing.

Fixed an issue with skid sounds.

Dirt Sprint Car Non-Winged
(ALL) – Season setups have been updated.

Ford GT – 2017
Fixed an issue where the nose of the car would disappear when viewed in mirrors at certain distances.

Formula Renault 2.0
Tire warmers have been added in response to feedback from members that the car can be difficult to drive before the tires come up to temperature in cold ambient conditions.

HPD ARX-01c
Fixed an issue where the right and left suspension cameras were inverted.

Kia Optima
This vehicle has been updated to use PBR shaders.

Lotus 49
Correcting some of the vehicle data specifications, which means time judgements for penalties, cutting corners etc. could have previously been incorrect.

Lotus 79
Improved asphalt scrub and skid sounds and for tires.

Fixed an issue with some tachometer lights displaying incorrectly.

Pro Mazda
Fixed some Level-of-Detail issues with this vehicle’s tires.

Chicagoland Speedway
Advertisements have been updated.

Circuit de Spa-Francorchamps
The gain time checkpoint at the chicane has been adjusted.

Darlington Raceway
Advertisements have been updated.

Eldora Speedway
The dust color has been adjusted.

All major trackside objects have been visually upgraded for both the new Dirt configuration and the original asphalt configuration.

Lanier National Speedway is an iRacing.com base content track, and this update is provided to all our Members without any additional cost.

New Smyrna Speedway
Pit stall 1 and 2 have been adjusted.

Nürburgring
The 1x penalty on the concrete/grass grid to the outside of T12 has been eased.

Pocono Raceway
Logos have been updated.

Sonoma Raceway
Logos have been updated.

Adjusted the level-of-detail distances for flags and fences to reduce visibility popping.

Texas Motor Speedway
The pace car driver has received additional training on this track and should enter pit lane with a better line and park in a better location.