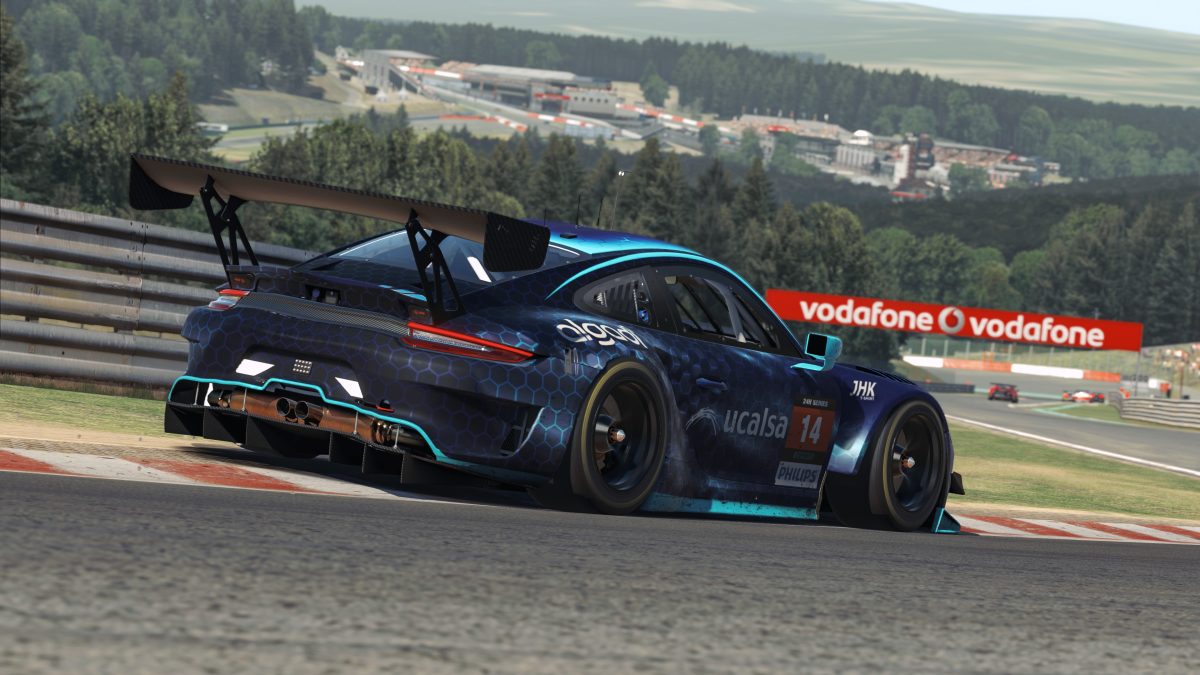 The MSI eSports team have opened their 2022/23 season account in the best way possible by winning the 6H SPA. In a race where one by one, their GT3 competition faced incidents and penalties, they remained steadfast and consistent to come out on top in their #14 Porsche 911 GT3 R. The all-Spanish team has gotten to grips with their new machinery impressively quickly, and for the second time in two seasons are victorious in the first race of a new season.

On track it was a close finish with the #7 cowana Gaming Porsche crossing the line just 1.176 seconds in arrears after a late splash and dash for the MSI team. The German squad however was carrying a 10 second penalty for an earlier incident with the #178 Maniti Racing TCR entry, so Dani Elgarbay only had to bring it home to secure the victory. Third place went to the #79 HAVU Porsche, which was promoted to the podium following yet another penalty, this time for the #46 Biela Racing Team EURONICS BMW M4 GT3.

It was a difficult day for all GT3 cars who qualified well. The top 6 on the grid was made up of a pair of BS+COMPETITION, Biela Racing Team EURONICS and Williams Esports cars each, yet only a single one managed to finish inside the top 5. The BS+COMPETITION and Biela Racing Team EURONICS cars all were involved with multiple incidents, while the #5 Williams Esports car retired with accident damage, and the #55 suffered a disconnect early in the race while in second place. They recovered back to an eight-place finish but were left to think about what could have been.

In the 992 class, the #975 Team75 Bernhard by SimRC outfit picked up right where they left off last season. The driver squad that took the GT4 title last season has moved to the 992 class, and instead of taking some time to find their footing with the new car, they were immediately on the pace. Jürgen Frank and Felix Luding played their strategy well and came out on top over strong competition from #911 URANO eSports HEINEKINGMEDIA in second and Visceral Esports in third. Visceral Esports were under massive pressure from #995 Williams Esports, who had to serve a 60 second penalty at their first pit stop. A close battle saw Vince Peeters fend off late substitute Alessandro Bico for the last spot on the podium.

URANO eSports was able to take victory in the GT4 class with their #490 Mercedes-AMG Team supported entry. Dylan B Scrivens and Constantin Tscharf beat the #439 SRC Mivano Corse trio of Fraser Williamson, Lorenzo Manfredotti, and Sacha Gorlé by over a lap. On paper at least, courtesy of the race winning #14 MSI Porsche splitting the two. On track, the SRC Mivano Corse squad was just over ten seconds behind. A further 30 seconds back, Team Fordzilla’s #466 completed the all-Mercedes AMG GT4 podium with the lead Aston Martin Vantage GT4 in fourth place courtesy of SimRC’s #476.

The GT4 field suffered a big upset just 25 minutes into the race, when Kay Kaschube in the #96 BMW TEAM BS+TURNER attempted a pass on Matthew Turnbull in the #416 Puresims Esports into the La Source hairpin. Turnbull himself was already going for an overtake on Alvar Gomez in the #434 Fiercely Forward, and space quickly ran out for the big BMW on the far inside. Kaschube and Turnbull touched, and courtesy of the blind apex of the La Source hairpin, multiple cars ended up involved in the ensuing accident. Apart from Turnbull in the #416, who was spun, Roberto Ferrari in the #491 Sabelt Esports, Thomas Cuvillier in the #463 Undercut Racing Team, Martin Sirotek in the #421 CSRA by Entropiq, Leon Erger in the #455 5Star Motorsport, Maxi Stefenson in the #473 Juncos Racing eSports, and Lukas Gabler in the #476 SimRC all were delayed or collected significant damage. This was also the incident that caused the #5 Williams Esports car to have to retire.

The TCR class was another that saw a higher attrition, but rather than through a single incident, this was due to multiple separate incidents, mostly involving GT3 cars. Puresims Esports’ #116 Honda Civic Type R, driven by Ross Macfarlane and Steen Ledger, took victory by just under 20 seconds from the #114 MSI eSports Hyundai Veloster N TC. After thinking they were on a winning strategy plan earlier on in the race, Team Heusinkveld’s #148 squad had to settle for third, just seconds behind the fellow Hyundai of MSI eSports. Gabi Montoro and Marcel Tie had a classic touring car style battle in the closing laps to decide the lower steps of the podium, ultimately in favour of the Spaniard. Only 5 of the 10 TCRs that started, finished on the lead lap in the class, however post-race, the #121 Aspar Team Esports Honda was demoted back to ninth place after exceeding drive time limits.

Reactions of the winners:

Dani Elgarbay (#14 MSI eSports): “This was a crazy race. We didn’t know who was going to win until the last stint, but with the Cowana and Biela penalties, in the end I didn’t have to finish first and still would have won. The strategies were all over the place. We decided against triple stinting, but I think that was the way to go in the end. I did a bad qualy and we started from P11, but our pace was good. I’m pretty happy with how it turned out. It was a bit crazy, but very fun.

This win will definitely boost our confidence. With the new car for this season, we definitely need some more work on the car as we saw areas where others were faster. This is a good start to our championship, to repeat a win in the opening race is very good for us.”

Jürgen Frank (#975 Team75 Bernhard by SimRC): “The race was really intense for us. Every stint we saved an extra lap of fuel, which meant we could do a small double stint at the end to take the victory. I struggled with the tyres in the last few laps losing 1.5 seconds, but in the end it was enough to win. Every season in the series it’s very competitive, this season in the 992 class there are some Porsche Supercup drivers and others with a lot of experience in the car. We are completely new to the car, luckily for us the car was updated two weeks ago which made it better for us. This is my sixth or seventh season in the championship, the last two years went pretty well so I hope it continues.”

Dylan B Scrivens (#490 Mercedes-AMG Team URANO eSports): “Congrats to Mivano for the excellent race. After the second to last stop we were pretty sure were in the running and could close it out. Their stop time was a lot shorter so we knew they would have to take on a lot more fuel in the final stop, and that’s where all the time difference was. Quite nice to win on our first try.”

Constantin Tscharf (#490 Mercedes-AMG Team URANO eSports): “We have found a pretty good setup for the car already, and we feel pretty confident about the car we have. Nevertheless the competition is really strong in the series, so I expect it to be a proper fight in the next races and I’m looking forward to those races.”

Ross Macfarlane (#116 Puresims Esports): “It was an interesting race, there was a lot going on with the TCR strategies. I think we had good pace to challenge for the win, but SimRC was also quite quick. Heusinkveld came on strong throughout the race which was surprising for us. However Heusinkveld were not immune from the stewards, luckily for us, and SimRC got unlucky with some incident. We just kept ourselves alive. The speed difference between the GT3s and TCR especially is quite phenomenal, so even after turning in for a corner you have to keep looking in your mirror. We managed to survive through it and to pick up the win, a good job.

The Honda and Hyundai are quite different cars. Both require a different driving style under braking and with the way they put the power down. It makes it interesting. There’s going to be a small BoP between the cars each race. We’ve gotten comfortable with the Honda, but even among the other Hondas we can see different setups and driving styles, so everyone is learning their way through the new season with the new cars.”