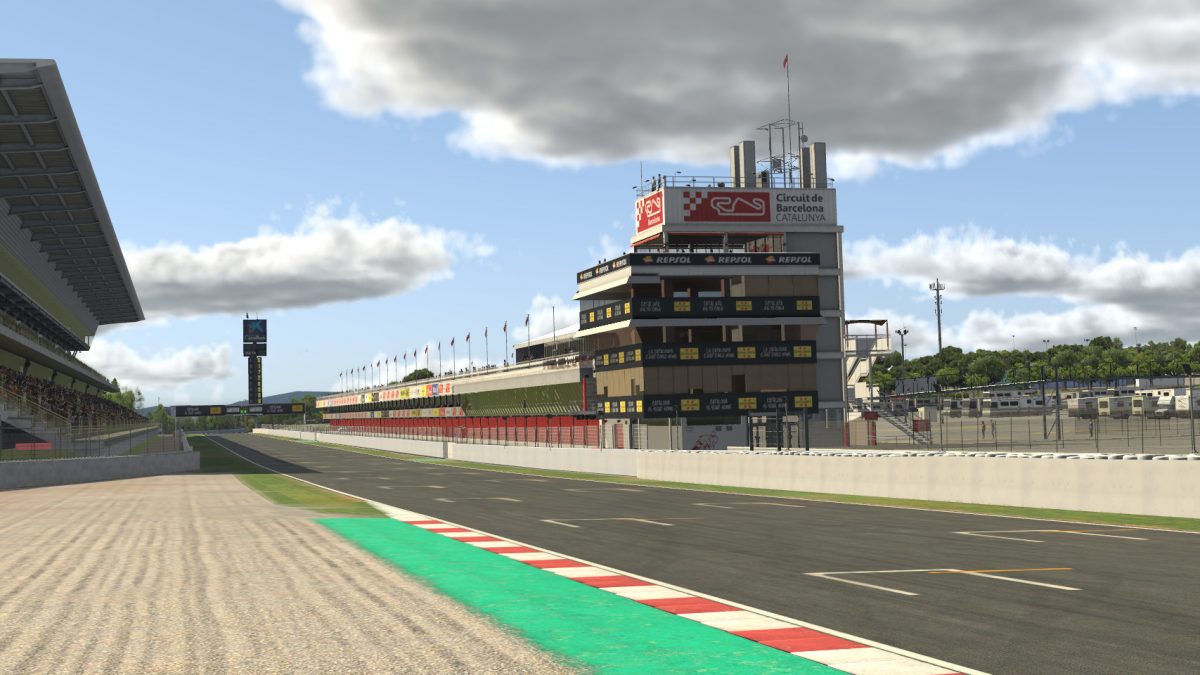 It has been a long and hectic month and a half since the last 24H SERIES ESPORTS round at Monza, both in the sim racing world and — especially — in the real world, but competitors in the virtual endurance championship are set for a brief return to normalcy, or at least finality, in this weekend’s season-ending 12H BARCELONA.

This marks the first visit of NEO Endurance-sanctioned competition to the Circuit de Barcelona-Catalunya after its release on iRacing last fall.

The Spanish track is the fourth to host the series’ season finale in six seasons, joining Road Atlanta, the Nürburgring, and Circuit de la Sarthe, which most recently held three 24-hour enduros to close the championship.

This year, a 12-hour event is on tap — the longest in this inaugural 24H SERIES ESPORTS season. Of course, the real 24H SERIES has turned plenty of laps around the Catalunya circuit as it has hosted the 24H BARCELONA eight times since 2011.

Given the newness of the Barcelona track to iRacing, any past experience at the circuit may pay off in this weekend’s race, and it’s hard to beat the hundreds of laps around the actual track accumulated by Dutch brothers Luc and Rik Breukers over the years.

Their Red Camel-Jordans.nl team finished on the TCR podium in the 2018 24H BARCELONA, and they will now compete in the virtual 12-hour race in an invited entry. Together with countryman Jorn Zoetekouw, the brothers Breukers will hit the track not in a TCR but in a Mercedes AMG GT3 for Red Camel Racing Esports.

They are joined in the field by Autorama Motorsport AG, whose #114 TCR includes Miklas Born, part of the team’s podium-finishing lineup in this year’s 24H DUBAI.

Three other new teams for this race earned their spot by winning their class in one of NEO’s feeder series. TRC Racing and Aurys Racing Team both represent CV Resistencia and will field GT3 entries, along with Oceanic Endurance Championship representative SIMMSA Esports in their BMW Z4.

Barcelona’s 4.655-km grand prix layout will be a tight fit for the 53 cars set to contest this weekend’s race, and thanks to the technical nature of the track, it will certainly be a worthy final exam in this six-round season, with the live broadcast beginning at 13:05 GMT on the iRacing eSports Network.

Our team representatives from all three classes pointed to the same part of the track as the most important in the entire lap.

“The final sector is very tricky to get right with its many small radius corners,” said Anders Dahl of Burst Esport. “It’s important to have confidence in the car to consistently get the braking right.”

“Smoothness and precision is what you are looking from your car there, otherwise it is easy to cook your tires and lose something like half a second in just a few corners,” said Moreno Sirica from Williams JIM Esports.

And it’s not just important in a solo lap. Managing traffic while weaving through the twisty turns and chicanes could also be make or break.

“In traffic, choosing the wrong line there will cost precious time,” said Miguel Freitas of Team MAD. “It’s all about keeping the nose clean to be able to finish the race in a good spot. It is a long race and our first strategy will be ‘better safe than sorry’.”

For faster classes, Barcelona won’t offer teams many places to make clean passes, both against one another and in traffic.

“It’s not an easy track in terms of overtakes,” said Sirica. “There’s only the main straight where you can use the slipstream of the car in front and dive in turn 1. With traffic, it is going to be interesting, for sure, and we will use some practice sessions to get used to it and understand the best spots.”

TCR drivers also warn that attempting a pass around the outside of sweeping high-speed corners like turn 3 (Renault) or turn 4 (Repsol) could cause problems.

“Lapped traffic will most likely cause some issues,” said Tuomas Tähtelä with ASTRO Gaming Altus Esports. “The TCR needs all the space it can get on the outside of those fast corners, so I predict that’s where we’ll see close calls or incidents.”

The main two concerns for teams entering this race are simply stated.

“Traffic and tire management will be very important,” said Dahl. “We’ll have huge tire wear with the Porsche struggling to find traction everywhere.”

It’s a theme we heard across all three classes including TCR, which has used iRacing’s latest tire parameters —  previously called NTMv7 — for the entire season. However, many teams are still getting used to managing their tires over longer runs.

“For our class, I think the keys are going to be strategy and tire management,” said Tähtelä. “This track has a very long fuel stint and a lot of demanding corners for the tires, so overheating and tire wear is a massive factor.”

GT3 teams, on the other hand, have only had a few weeks to adjust to the latest tire model. That adds an extra unknown entering the season finale.

“For us, everything is completely new,” said Sirica. “The old setups are not suitable anymore on the new tires, and we are actually spending a lot of time, trying different stuff on the setups, hoping to find the best balance.”

The 12-hour distance presents other challenges, including the changing time of day — from a 3 pm start to a 3 am finish in the sim.

“We might be able to run a slightly more aggressive setup since most of the race will be quite cold,” noted Tähtelä.

Despite the many new and different elements of this race, some teams will turn to what has worked well for them this season. Among them is Team MAD, which finished fifth at Silverstone after a bit of sneaky fuel strategy worked in their favor.

“I like to take longer races with a different perspective: save the car, save the tires, and save fuel while keeping in the pack to open new strategy opportunities,” said Freitas.

“We need to let our pit wall guy shine!”

The teams who find success at the end of the night will likely need their whole lineup — drivers, strategists, and spotters — to shine in what promises to be a demanding race for all.

Of course, those demands only add to the pressure facing a handful of teams still fighting for their class championships.

With double points on offer, three teams are vying for the TCR title. The odds-on favorite is CraigSetupShop, as with their 39-point lead and five victories, they can clinch the title with a finish of tenth or better.

Of course, in such a long race with plenty of traffic to deal with, it will still require solid execution and perhaps avoiding any bad luck for Jack Sedgwick and Simeon Lynch to survive and earn the championship.

CraigSetupShop extended their points lead with last month’s victory at Monza, but their closest rival, CoRe SimRacing, does have a bit of momentum on their side. In last Sunday’s 90 Minutes of Sebring race, the team’s drivers earned top-split victories in both classes.

The longshot among the TCRs is SimRC, who need to win and have CraigSetupShop fail to finish in order to claim the championship.

The GT3 class is the most competitive in the standings with eight teams still mathematically eligible for the title. Despite a sixth-place finish at Monza, Williams Esports holds an eleven-point lead entering Barcelona, and a decidedly more Audi-friendly circuit should help the hopes of Laurin Heinrich, Kay Kaschube, and company in the #55 car. A second-place finish on Saturday would be good enough for Williams to walk away with the title.

The Mercedes may not be the car of choice in Catalunya, but that certainly won’t stop Ronin SimSport, who seemed to gain speed and confidence each round this season.

They enter the race second in the standings with a seven-point cushion over Biela Racing Team EURONICS, who started with the points lead after their 6H SPA victory but fell to third with a DNF at Monza.

If the Biela #45 team is able to find victory lane again at Barcelona, they would need Williams to finish third or worse in order to win the championship.

And if any of the top three teams stumble, the door could open for the Silverstone winners from Williams JIM Esports, currently fourth in points, or the Monza winners from Mivano Racing to make a push for the win and the title.

It would take a race win plus some help for three other GT3 teams to earn the championship. Those are SRC Squadra Corse, MSI eSports, and S2V Esports, who enter the race sixth through eighth in the standings.

Finally, the pressure may be off for MSI eSports’ 991 team after their fifth win in five races clinched them the class championship in the last round at Monza, but as they recently told us, they will still be pushing hard to complete an undefeated season.

With only one class settled and plenty of unknowns still in the air, one thing’s for sure: it will be an action-packed 12 hours on Saturday where teams may struggle to manage their own social distancing around 50+ opponents with championships on the line.

Said Freitas, “with this short of a track, we will have cars always going by!”

Hours of Practice, a Year of Waiting Rewarded with MSI's First Title