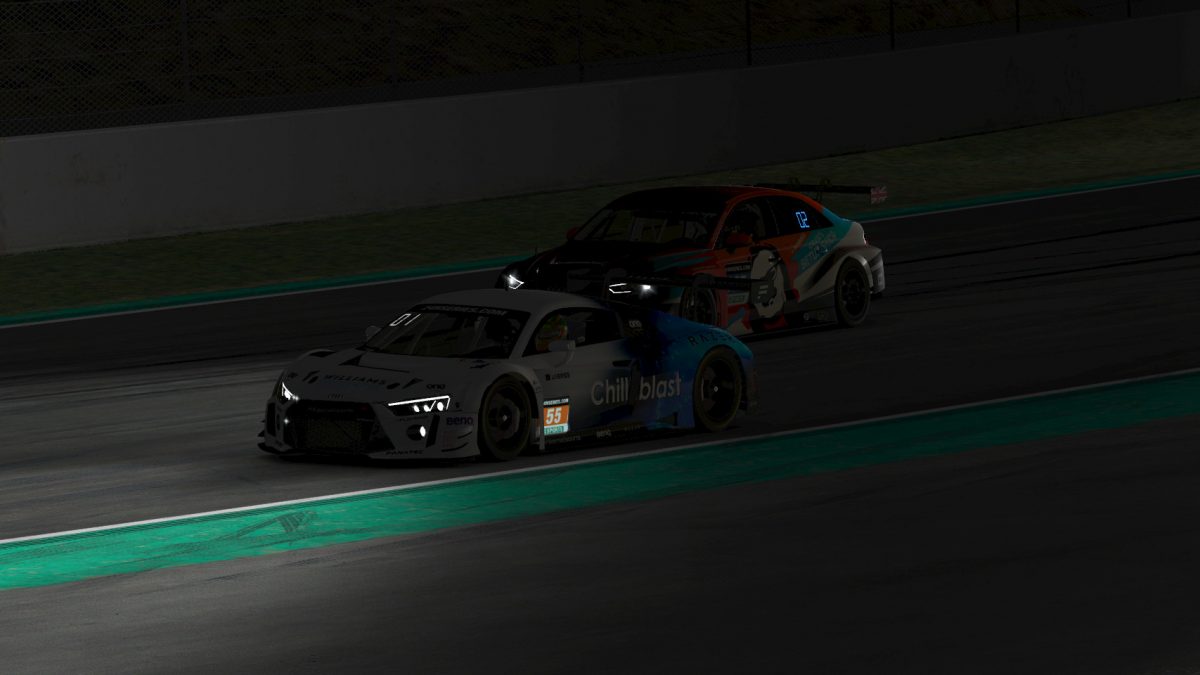 With early shows of strength in Saturday’s 12H BARCELONA, the GT3 and TCR points leaders ensured there was little drama at the conclusion of their championship quests in the 24H SERIES ESPORTS season finale, while one team locked down a pair of class victories in its home race.

The most competitive class in the standings was won decisively by WIlliams Esports, who finished a full lap ahead of their closest rivals in capturing their third win in six races this season.

Kay Kaschube, Dominik Staib, and Arthur Lehouck combined for a near-perfect performance to lock up the title for Williams. From second on the grid, Kaschube took the lead on the first lap and the trio never looked back, leading 395 of 401 laps during the 12 hours at the Circuit de Barcelona-Catalunya.

Second place in the class came down to the closing laps after Biela Racing Team EURONICS made a late pit stop for a splash of fuel. Leo Racing Team was the car on the move, jumping from fourth to second with four laps to go to take their best result of the season. MSI eSports was third, earning the team’s first podium in the GT3 ranks.

Their teammates in the 991 class had already locked up the championship entering the race, but they showed no signs of slowing down at Barcelona. Alejandro Sánchez, Marc Pérez, and Salva Talens were again unbeatable in the Porsche 911 GT3 Cup category, finishing three laps ahead of second-place DV1 TRITON Racing and Inertia SimRacing in third.

With their victory, MSI became the first team to run the table and complete an undefeated season in NEO Endurance history. But one other team had the chance to match that feat.

CraigSetupShop also entered the season finale five-for-five, and as long as they were classified at the finish, they knew they’d lock up the class championship. But finding victory proved difficult for Jack Sedgwick and Craig Williams, as MSI’s TCR team of Oriol Bohé and David Pérez continued its late-season surge in the class.

After Pérez put the #177 Audi RS 3 LMS on pole, he and Bohé pulled away from the likes of CraigSetupShop and CoRe SimRacing, building a 50-second lead inside the final hour that even Sedgwick was unable to overcome.

For MSI, the TCR victory was the cherry on top of a successful race — three podiums and two victories among its three teams.

And while CraigSetupShop couldn’t complete their sweep of the season, they did leave the virtual Barcelona circuit with a well-earned championship, chased to the checkered flag by who else but their season-long shadows from CoRe.

In all, 34 of the 45 starters made it to the finish, and while it was a race peppered with plenty of incidents between classes, most teams managed to survive with a few battle scars to show for a long day — and night — of work behind the wheel.

Stay tuned to neo-endurance.com in the coming weeks for additional coverage of the Barcelona race and a wrap-up of the season, including team and driver insights and class-by-class recaps.