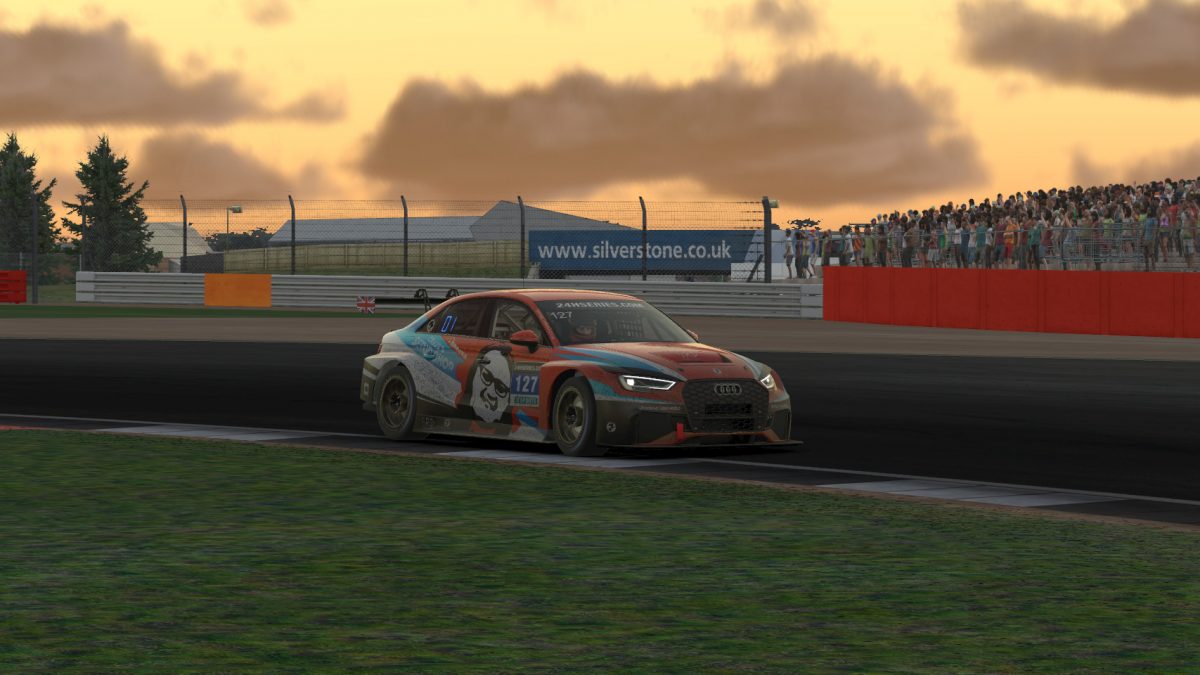 More than 40 percent of this season’s TCR teams hail from the United Kingdom, so Sunday’s 6H SILVERSTONE was as close to a home game as they’ll get in sim racing.

Whether it’s extra familiarity with a favorite circuit, motivation to perform well, or even real-life laps driven at the track, home-race advantage can be a factor even in virtual racing.

Those Britain-based TCR teams in this 24H SERIES ESPORTS season include NEO’s mainstays from Torque Freak Racing, perennial iRacing contenders from Williams Esports, and — frustratingly for the rest of the field — CraigSetupShop, whose all-UK lineup needed little extra incentive or assistance after starting the season two-for-two in the class.

Inauspiciously, they started their Sunday off the front row, as an incredibly tight qualifying session saw SimRC snatch the pole from CoRe SimRacing by just 0.004 seconds, third- and fourth-place CraigSetupShop and Satellite Racing less than a tenth behind, and the entire 13-car field separated by less than 0.8 seconds.

With such close competition, it was setting up to be an incredible race, and perhaps one in which CraigSetupShop didn’t have the pace advantage from the drop of the green flag.

In the early laps, it again appeared that might be the case. While CoRe’s Thomas Gibson got around SimRC’s Felix Luding, a charge from sixth on the grid for ASTRO Gaming Altus Esports saw their Alexander Lauritzen leapfrog Jack Sedgwick, dropping CraigSetupShop back to fourth.

But the championship leader’s slow start didn’t last long. On lap 7, Sedgwick pounced, getting past Lauritzen and holding off Satellite’s Janne Hautamäki in a three-wide race down the Wellington Straight.

By the end of the stint, he had chased down the two leaders and put the familiar orange, blue, and white Audi RS 3 LMS into the lead. A bit of early fuel saving and a long-run pace advantage again fell in CraigSetupShop’s favor, and by the first pit stop, they along with CoRe had broken away by a full ten seconds over third-place SimRC.

It’s the same scenario that played out at both Spa and COTA, and in both of those races, the heads-up fight between this season’s top two teams was won by CraigSetupShop using a combination of speed and strategy.

A few of their competitors tried to get in on the strategy games in this round. Team MAD consistently stretched its fuel the longest, and David E. Baker led six laps during his race-opening double stint. While they were no longer in range of the leaders by mid-race, they had opened the door to a sneaky move that would benefit them later in the afternoon.

SimRC also ran longer on several stints, and Luding briefly held the lead before they settled back in third. They weren’t unchallenged for that position, though. MSI eSports caught up to make it a two-way fight, and David P. Pérez traded the position with Luding near the midpoint of the six-hour race.

Behind them, the first half of the race brought mixed fortunes for several TCR teams. Altus was running a solid fifth before the first pit stop, but a speeding penalty entering the pits proved harsh in dropping them to the back of the field.

Alpinestars Geodesic Racing entered the pits just behind them but didn’t copy their high-speed entry, and despite starting near the back, Dominic Ollivierre spent a stint in fifth as well. Bad luck bit them during the second half of the event, though, and Diogo C. Pinto had to call the tow truck after an on-track malfunction toward the end of his first stint.

Another team yo-yoing up and down the order was RaceKraft Esports. Kane Halliburton took the starting duties this round and had their #113 car in the third-place battle early on. However, an unscheduled pit stop midway through the race also dropped them further back and left them with the prospect of a longer fuel fill during their final pit stop.

The last stop of the race would be a decisive one for more than one team, including the two leaders. Simeon Lynch and Carl E. Jansson both put in strong performances during their middle stints, and the fight between CraigSetupShop and CoRe remained bumper-to-bumper — and at times, door-to-door all while GT3 traffic roared past — inside the final hour.

CoRe pitted first and switched Jansson for Gibson, while CraigSetupShop pitted two laps later and kept Sedgwick in the car. He received a shorter fuel fill, and perhaps a questionably short one with 15 laps still remaining.

But it was a difference-maker, giving CraigSetupShop a four-second lead and a draft-proof advantage for one of the first times all race.

From there, the half-stint to the finish played out in favor of CraigSetupShop, leaving them seven seconds ahead with enough fuel in the tank for an entire cool-down lap.

As Gibson watched Sedgwick drive away, his mirrors were also filled with the fast-closing Altus GT3 car in the esses, and he was an unwitting participant in the contact between them. While that crippled Altus’ shot at second in class, CoRe continued for their third runner-up finish in as many races this season.

SimRC was the final team to make its last pit stop, and a short fill helped them secure third place and their second consecutive podium. Luding’s pace down the stretch also helped him open the gap to MSI, which finished fourth to match its Spa result.

Team MAD’s fuel stretching paid dividends, as they made it to the finish on just four pit stops and picked up four spots while their competitors made an extra stop near the end. For Baker, Pete Harrod, and Miguel M. Freitas, it was their best showing this season and one in which they finally cracked the top half of the TCR field with a clever strategy call.

While their fifth-place qualifying performance was promising, the first lap of the race couldn’t have gone much worse for Team Chimera. Caught in the middle of a three-wide battle through the arena section and seemingly passed on all sides late in the lap, it put them on their back foot, but a race-long comeback for Jamie Wilson and Simon Trendell helped them pick up a few spots and finish sixth.

RaceKraft’s own rally from their unscheduled stop ended with a close fight against Williams Esports that saw contact between the two in the final laps. Despite a tap from Andre Boettcher and a slide out of Vale for Kane Halliburton, the RaceKraft driver recovered to make the pass for seventh with two laps remaining and best that team’s COTA result by one spot.

As at COTA, Williams seemed to struggle for pace down the stretch and dropped from sixth to eighth in the final hour. After their early speeding penalty, Altus spent much of the race at the bottom of the running order before they clawed back two spots in the final stint, putting them in ninth.

For Satellite Racing and its lone entry this race, the promising early run in which they went toe-to-toe with the likes of CraigSetupShop was done in by a speeding penalty of their own, and they could only manage tenth in a day that showed the potential for much more.

Geodesic was the final finisher in the TCRs, while Torque Freak and Apex Racing Team were both unclassified in the official results.

Although this round had a smaller field, one claim to fame for the TCRs was the entire class avoiding penalties for on-track conduct all race. They were certainly on the receiving end of a few bumps and tight squeezes from their GT-class competitors, but it was fair play from their side, including in several characteristically close battles between touring cars.

But the one team who has tamed the TCR better than the rest again dug into its bag of tricks to find victory last Sunday.

For CraigSetupShop in its home race, a Silverstone win was yet another crowning achievement in their ascent to TCR royalty this season. And for the other TCR teams, British or not, they’ll have to keep a stiff upper lip and hope the second half of the season goes more swimmingly.