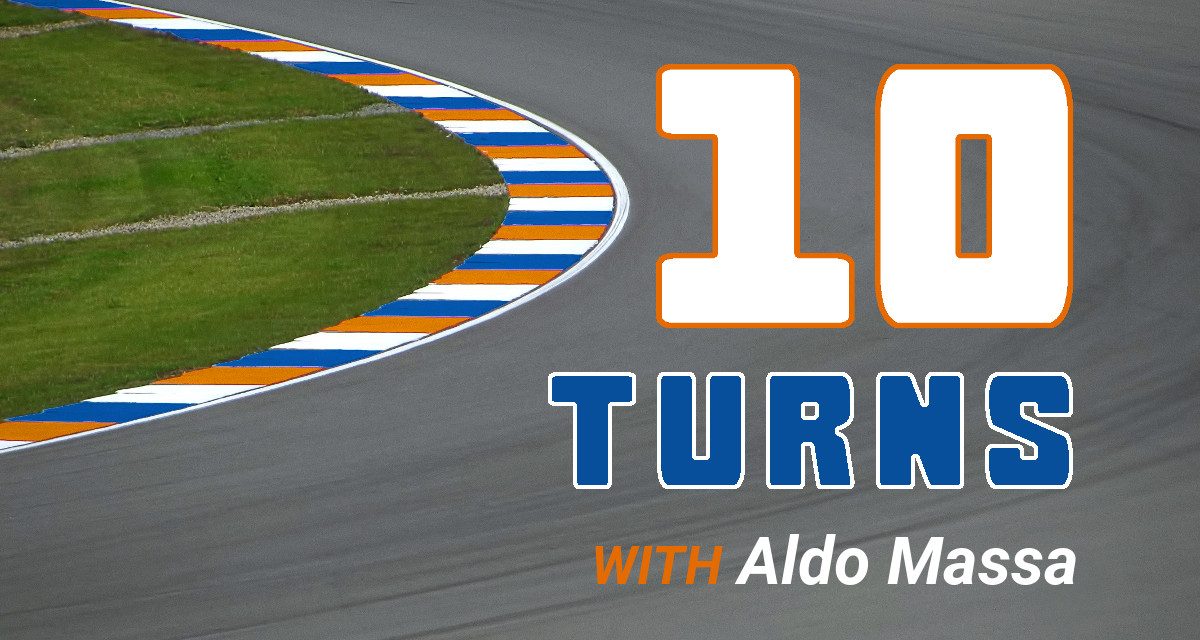 Welcome to the second edition of 10 Turns in this 24H SERIES ESPORTS season.

Today we’re talking with Aldo Massa from the GT3 class. He’s a free agent at the moment, but he’s coming off one of the best drives of the season so far, moving from sixth to third in the first hour at Circuit of the Americas.

Corey Davis: Aldo, congratulations on that result! I heard that was your first time racing at COTA, so how was that experience?

Aldo Massa: Thank you, yes it was the first time at COTA and I enjoyed it a lot because COTA is quite a difficult track. It has a lot of space and a lot of runoff area, but driving at COTA with smooth operation is quite difficult because when you have a larger space, you are forced to do more but you can’t do it because the off-track limit is quite tight in the NEO championship.

Corey: It was a tough track, but especially that first stint you looked really good out there. You made up a bunch of spots, so congratulations.

Aldo: Thanks, yes I trained a lot in traffic management and I think in COTA, I began to have some improvements. I can manage with a lot of cars around me. Maybe sometimes I’m a bit aggressive, but from my point of view, it’s under control, you know.

I’m not watching esports at all. I only watch sim racing. My favorite sport outside of sim racing for sure is mountain biking.

So is that professional mountain biking or is it just going out with your friends and riding your bikes?

I raced in the past as a professional rider. I won an Italian championship in the downhill category. It’s the most extreme mountain biking, the downhill. Because you drive the bike only in downhill in the most technical trails, but at the moment, I do it only for fun.

Wow, that’s interesting! So you won the championship, but have you also had any big crashes or big injuries in mountain biking?

Yes, in the last year of racing, I crashed quite hard in Cortina d’Ampezzo and I have an injury at my knee, my right knee. Then I stopped racing and began to do it only for fun.

Just yesterday, I upgraded to a 144-Hz monitor.

Do you run triple screens or just a single screen?

For the moment, just a single screen.

That makes your drive at COTA even more impressive, because with a single screen, it’s really tough to see a lot of the apexes.

Yes, you need to train a lot, the muscle memory and also keep a lot of the reference for braking and turning in, for sure. In traffic, it was hard to see all my reference points, braking points. Yes, I can confirm!

I am usually going to make the anti-roll bar adjustment because in the race session, the track is always different from an offline session or hosted session. In a race session, all of the cars are on the track and put some rubber on the track, so it’s quite different. A lot different, I would say.

Good question. I would keep one in sim racing, and this is Simone Maria Marcenò. And for sure, one from real life will be Sebastien Loeb, I think.

I’m surprised as an Italian that you don’t have any Ferrari drivers in there!

Yes, but because I’m coming from the rally world, my legend is more on rally.

I have only one superstition: the password of the hosted [session] before the race. Moreno [Sirica] always puts “first place”, “first on the grid”, but I don’t like it at all. I prefer “last on the grid”, “last place”! Haha.

Try for some reverse psychology there!

We don’t have any Middle Eastern tracks, so would you go for any of the other ones there, like Bahrain or Abu Dhabi?

Abu Dhabi, for sure. Instead of Bahrain, Abu Dhabi.

A major mistake is not having enough mental strength or maintaining karma in difficult situations.

Have you done any longer races, like any 12- or 24-hour races with the team?

Yes, I do a lot. Last year, the 24 hours in NEO with Moreno and Dominik Staib. But I’m still nervous when things go inverse of what we have planned. For example, at COTA, I found my setup very fast in the first hour, and then the car began to understeer a lot after two hours because of the rubber, and then I can’t maintain the car.

Maybe do a 24-hour race with Mitchell deJong and Joshua Rogers, haha.

I’d say you’d probably have a pretty good chance of winning that one! Do you have a preference for a car or a particular race you’d like to run with them? Would you go for a Daytona or a Le Mans, or something else?

No. For the car, maybe a GT car because I like GT cars more than prototypes.

9. In the last interview, Craig A. Williams asked “Why are you not using craigsetupshop.co.uk?”

If he can’t maintain the karma ever in the race, also if things begin to go in the wrong direction.

So how do they handle that if things start to go wrong?

Thanks a lot, Aldo. It was great talking with you, and again, congratulations on the good result at COTA and I hope you keep it going at Silverstone!

Yes, I hope also, and thanks for the congratulations.

And thanks to all of you for listening. Again, we’ll be back in the coming weeks with coverage for the upcoming 6H Silverstone, so stay tuned right here to neo-endurance.com for all the upcoming race previews and recaps.

10 Turns with Craig A. Williams