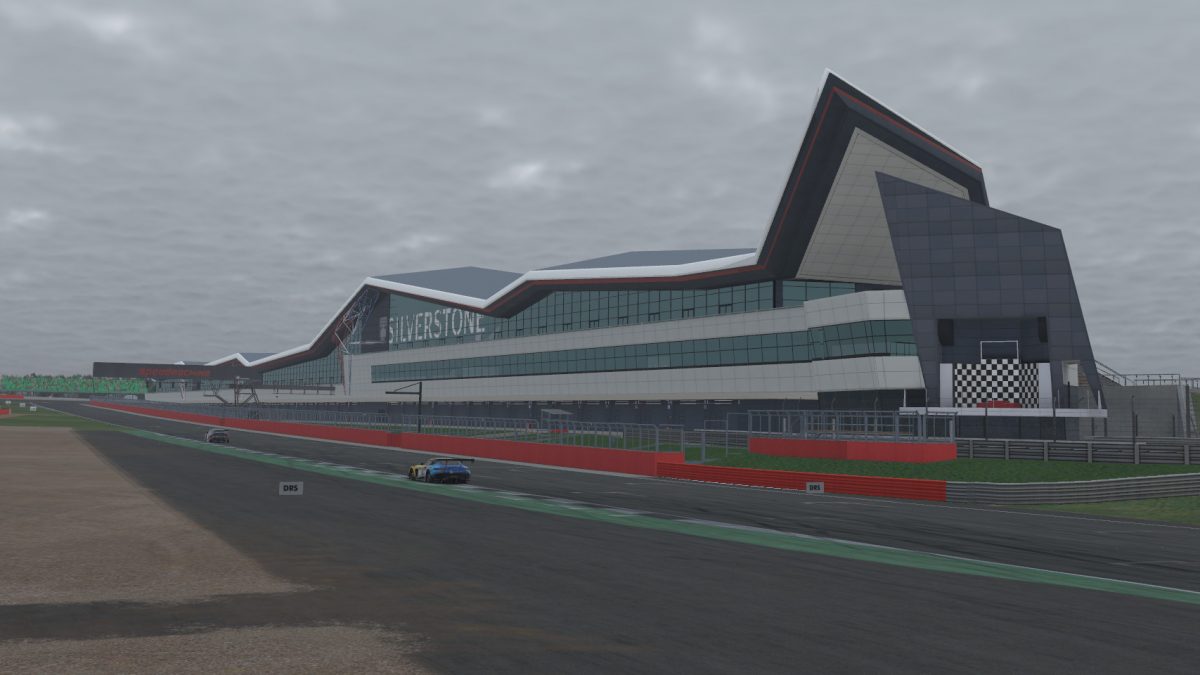 After four seasons as NEO’s warm-up act, Silverstone has a fresh facelift and is ready for its time to shine in the 24H SERIES ESPORTS as it hosts its first regular-season race this Sunday.

Our team representatives from all three classes shared their thoughts amid their preparations for the 6H SILVERSTONE as part of this race preview.

Before this season, Silverstone was the perennial pre-qualifying venue for the NEO Endurance Series, so while it has helped set the grid since season two, it hasn’t helped crown the series’ champions in points-paying events.

We have seen NEO-sanctioned racing at Silverstone, though. In September 2018 prior to season five, the second half of pre-qualifying used a two-hour race to test teams’ speed and abilities in traffic.

All three class winners from that race are on the grid this season as well. Sorg Rennsport eSports took a narrow two-second victory over SimRC in the P1 class, and drivers Mike Nürnberg and Florian Krüger are now split between Sorg’s GT3 and TCR entries.

After a come-from-behind drive, Torque Freak Racing topped the P2 class in that pre-qualifying race. Ronny Nunez, the architect of that late-race charge through the top five, is now a part of Torque Freak’s TCR team.

In the GTE class, Team Eighty-Five — now Biela Racing Team EURONICS — dominated thanks to strong runs by Lukas Jestädt and Gregory Tanson. Both are now in Biela’s #45 Audi, which won the season-opening 6H SPA and finished second last month at Circuit of the Americas in the GT3 class.

Of course, new classes, a new Silverstone layout, a full grid, and a six-hour race with championship implications mean that past history could be largely irrelevant.

“When we qualified for this series last season, we were using a P2 car, which is very dependent on downforce,” said Miguel Freitas from Team MAD.

“Now we are using a touring car, so there is not much to learn from pre-qualifying, apart from knowing that where we overtook on that track before is where we will have GT3 cars diving in this season!”

The 6H SILVERSTONE is based on the 24H SERIES’ 12-hour races at the circuit, which were held in 2016 and 2018. In last year’s race,  ROFGO Racing’s Mercedes AMG GT3 won in the A6 — now GT3 — Pro class, while Car Collection Motorsport was first among A6 Am teams in their Audi R8 LMS. IDEC Sport Racing won in the 991 class.

That same weekend featured a 24-hour race for TCR teams, and it was won by Red Camel-Jordans.nl in their Seat LCR TCR V3 DSG. The only Audi RS 3 in that race was fielded by Excelr8 Motorsport and finished eighth, more than 100 laps behind the winners.

This season’s TCR teams will be hoping for a more reliable showing from their Audi machinery.

The former Royal Air Force base in Silverstone has come a long way since 1943. After hosting planes in World War II, it became one of England’s Edens for automobiles beginning in 1947.

Over the years, the circuit has moved from the airport’s runways to its perimeter roads, which have been moulded into today’s permanent road racing venue.

The most recent configuration change came in 2010, as the Grand Prix layout was adjusted to bypass the famous Bridge corner in order to better accommodate yet another type of vehicle — motorcycles.

That current laser-scanned version of the circuit is now on iRacing, so teams who were dialled into the old layout will have to learn a few new corners for this weekend’s race.

The start-finish line has moved halfway around the track after Club corner, and instead of leading into a left-hander at the Abbey chicane, the first corner is now a fast sweeping right-hander entering the new infield section.

Turns 1 and 2 are both well-suited to the downforce of GT3 cars, so as at COTA, you may see some bold outside pass attempts or cars threading the needle up the inside as the fastest class works through traffic.

After that are the two tightest corners on the track, turn 3 (Village) and turn 4 (The Loop). Even without the challenge of traffic, this Arena section will be tricky to negotiate, and it leads onto one of the track’s longest straightaways.

“Turn 4 is quite a tricky corner, especially with degrading tires,” said Michael Drechsler from Huber Racing E-Sports. “It’s very easy to lose a position at the end of the straight before turn 5 if something goes wrong on the turn-4 exit.”

That Wellington Straight leads into more familiar territory — the Brooklands and Luffield complex that will also test old tires and awareness in traffic as cars zigzag from right to left and back to again for the apex — or maybe double apex — of the long Luffield right-hander.

After emerging on the old start-finish straight and hopefully not heading into the abandoned pit lane, cars will tackle one of the most iconic sequences of corners in British motor racing: the ultra-fast right-hander at Copse followed by the esses at Maggotts, Becketts, and Chapel.

Along with being a key to a fast lap, this section will be important to survival, both for tires and for cars in an endurance race.

“At Copse, it is very easy to get an off-track while trying to get through there fast and not killing the tires,” said Freitas. “In the following corners, we need all of the track, so it can be tricky in a tight multi-class field.”

For faster classes, it will be important to get a good exit out of the esses and onto the Hangar straight.

“Mess that up and you’ll easily lose half a second, and with someone on your bumper, even a position,” said Dennis Gerressen of Virtual Motorsport.

The final few corners in the lap may look similar to the old Silverstone layout, but a few cosmetic changes make driving them a bit different — and potentially more costly.

“The final sector is very tricky. It’s all about finding traction, and if you hit the sausage curbs, you can easily lose 3 tenths,” said Anders Dahl from the Burst Esport 991 team.

All in all, it will be a demanding 5.9 kilometres to get right. For top teams, that means hitting every corner correctly will be crucial.

“Silverstone is a very technical track, and you need to be precise and smooth throughout all the lap if you want good lap times,” said Moreno Sirica from Williams JIM Esports.

Last week’s quarterly iRacing build brought changes to two of the cars in the field, so teams in the 991 and TCR classes will have to make some quick adjustments to get used to their tires, which may feel a bit different this round.

“While the brand new tire model feels good, it is very tricky on the opening laps,” said Dahl. “I foresee some awkward spins for the Porsches. If you survive the first couple of laps, it will be a matter of keeping life in the rear tires as we are heavily rear-limited on this track.”

The Audi RS 3 TCR is also on the latest tire model version, and its updates seemed to have improved the drivability on new tires.

“Now that we have tire warmers, the challenge of being fast at the start without oversteering everywhere is gone, so we will be focusing on traffic, fuel, and tire management,” said Freitas. “Easier said than done when we are in a tight field trying to keep near the front guys!”

That could introduce some additional strategy options for TCR teams, as being the first car to pit and change tires might not be as big of a disadvantage as it was at Spa and COTA.

For GT3 teams, the tires are the same and so is the traffic this round. Each of our representatives from the fastest class pointed to traffic management as their biggest key to the race.

“Silverstone is always challenging in any category, but as we learned in the first two races, traffic will be the key,” said Sirica. “The track is overall faster than COTA, and that means that you can lose even more time if traffic comes in a bad way.”

For some drivers, there is a reason for optimism that Silverstone may not be as difficult for negotiating traffic as the previous round in Austin.

“Traffic was heavy in COTA and we expect the same here, but we believe it will be easier to manage as there is space for faster classes to overtake more often,” said Freitas. “So the goal is to let them go as fast as we can so we lose very little time. Hope everyone is patient all around!”

Even though some characteristics of the circuit, such as fewer tight corners and a wide track for passing, should make it easier for running side by side, but that still doesn’t mean it will be easy.

“The track is very well suited for multi-class racing, in my opinion,” said Gerressen. “But a mistake is easy to make and could ruin any chance of a good result.”

That should make Silverstone a worthy grounds to test this season’s 24H SERIES ESPORTS competitors.

Coverage of Sunday’s event from RaceSpot begins at 13:05 GMT on the iRacing eSports Network. The class-by-class qualifying is followed at 14:00 GMT with the start of the 6H SILVERSTONE.

It’s not the first NEO-sanctioned competition at the track, but it’s perhaps the most meaningful yet as we’ll be halfway to crowning our series champions once the checkered flag waves on Sunday evening.