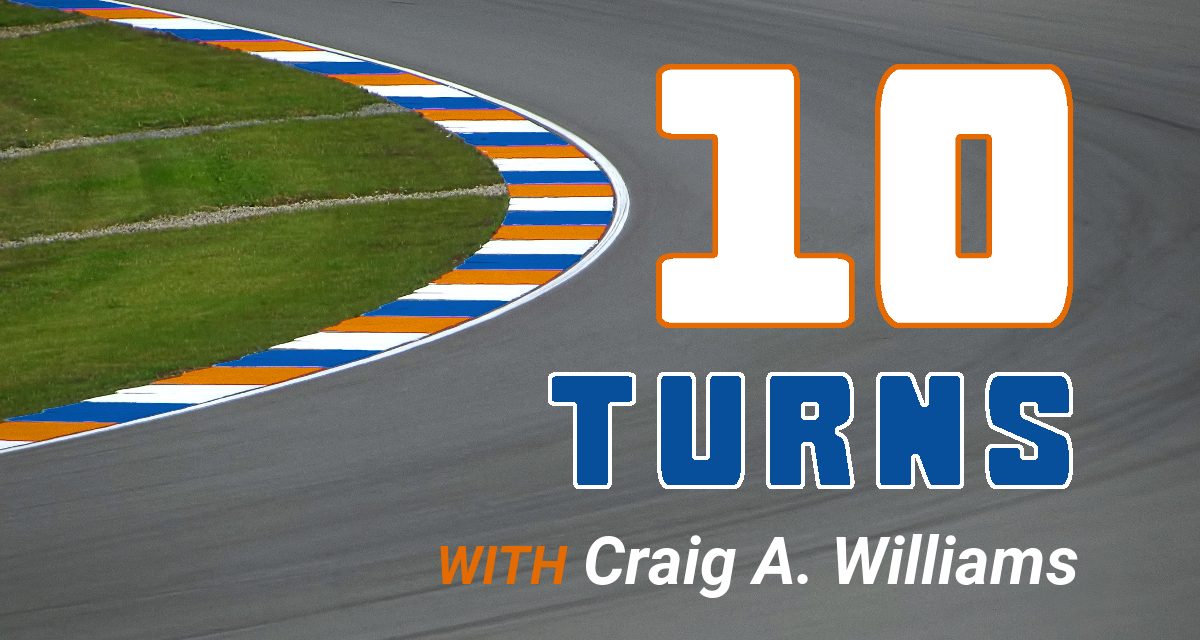 10 Turns with Craig A. Williams

Welcome to a brand new season of 10 Turns on neo-endurance.com. This is the series where we interview drivers and team members, hopefully get to know them a little bit better, and for this season we’ve got a new set of questions ready to go.

We’re kicking off the 24H SERIES ESPORTS championship by talking to someone in NEO’s newest class and iRacing’s newest car, the Audi RS 3 TCR.

Craig A. Williams is maybe iRacing’s most well-known setup maker, and he shares those setups through his subscription service, CraigSetupShop. This season, that organization is expanding into NEO, and Craig is their team manager.

Corey Davis: So Craig, thanks for joining us! Are you and your team ready for the new season?

Craig A. Williams: No. Yes. Absolutely. We’ve done many hours. No hours, yet.

Corey: Alright, well that sounds good. And more importantly, are you ready for the 10 Turns?

Craig: Ye- no, never. I’m never ready for any questions. I don’t like being put on the spot. Even if I’ve read it and I know what to say, at any point in any interview, job interviews and all sorts, I’m like Ah, eh, em. Have I ever walked before? Um, I’m not sure. Maybe? How did I get here? I can’t remember. Damn. I’m not very good at this whole interview thing.

Corey: Alright, well that means this will be especially fun then.

At the moment, CS:GO. And I don’t really know why. I never got into when it was bigger. I never watched it, I never cared. But then I played it and I’m like, this is kind of nice. I like the competitive aspect and the strategy. It’s kind of like motorsport, I guess. So I got into that a lot recently.

I recently got some Heusinkveld pro pedals. They’re amazing, to be honest. They’re pretty epic. I got a new wheel. I got a direct drive wheel. I don’t know what was last, though. I upgrade it all the time.

Do you feel like the new pedals especially are a big improvement to your performance?

I went from Fanatec V3s with the brake mod in them, and I didn’t think I was going to notice anything. I’d never tried HEs. Everyone just told me to buy them. Then the offer came up to get some, and I’m like, okay, I’ll buy them. And I got them, I’m like, wow, these are pretty special. I just thought these look the part, these look really cool. And then when you use them, you’re like, yeah these are pretty epic. So yeah, definitely. I like them a lot.

What’s wrong with my car, though?

So let’s say you load the baseline setup and you’ve only got one minute to just make any adjustment that you know is typically going to make a car feel like you want it to, so what’s that adjustment you’re going to make?

Firstly I load the baseline and then I vomit a little because they’re awful. All of them. But mostly because I know what to change. It’s more of like a breaking the game kind of thing, like 95% of the cars in iRacing like softer springs, or really soft springs. So normally springs.

Change the camber, because I think most of the old baselines have got super low camber, and because the tire model at the moment, you just crank that right up. Just keep that shift-click going.

Wing, if the car doesn’t have max wing, especially in GTE, just max wing it out. I probably shouldn’t have said that. Don’t write that.

Any 24-hour race? Le Mans. In a car? GTE, because from driving prototypes on iRacing, I just can’t think fast enough. I can’t do it. I can set them up just fine, and I can drive around on my own just fine. But I’m like yeah, if I drive any faster my head’s going to explode. GTE is my LMP1 car, and everything else is fine from that point. I’m too old.

As for drivers, I’ve met a couple of really cool racing drivers in sim and in real life. I get on quite well with Nicki Thiim. That guy is insane. I just want to have a laugh for 24 hours and not be too serious.

And… I don’t know, man. I don’t know. Who have I never met that I’d love to meet? There’s obviously like the obvious Ayrton Senna. That guy was a monster. And Fernando Alonso in his era was a monster. But they all drive cars that are way too fast, so I couldn’t drive with them.

Normally, I plan to wake up in the morning. That’s good. I kind of forgot to make a team for NEO, and then I got a text saying by the way, you haven’t made a team, so we can’t qualify. I’m like, ah yeah, team manager, that is me. I forgot to do that.

Usually, I like to plan everything out because with having kids and the wife, they need to know like two weeks in advance if there’s a race coming up. But they’ll always know — my wife especially — like the Spa 24 hours, Le Mans 24 hours, it’s like, this is coming up. I’ll be doing it.

Normally I’ll stream it, so getting the stream ready. I normally drive later in the day because I do it when the kids are in bed, so I’ll drive from like 9 pm til 4 am sometimes. I’ll just do the night stints, so during the day, I’ve got all day to do everything. Have a drink before you get in. Make sure I’ve got a bottle next to me.

I’ve got time to forget everything. Forget to sign the car up. Forget to make a team. Then forget who’s in my car. Make a spreadsheet so you know when you’re driving, because obviously when you’re streaming a lot, it’s when do you drive? And I’m like, hey, I’m just driving whenever I remember. It’s normally later on, so I can be a bit lazy on race day.

Mugello would be my answer. They run the — it’s like a 12-hour, and they split it into two six-hour races, and I think Mugello would suit iRacing really well. As much as it’s more commonly known as a bike track, I still think it makes a good race track.

So do you think any of the other TCR cars would be interesting to add?

I get this question so much because apparently I know all these things. But I have a soft spot for Alfa Romeo. I think a Honda would be good, I mean all of them, really. The Golf, I’m not too bothered about. I’m English. I see Golfs everywhere. I’m sick of looking at them. The Alfa. The Honda. The Lada, or the Subaru. They’re retiring the Subaru, but that means they can bring it in, right? They’ve got no excuse now.

I crashed in the 24 Hours of Daytona because I went side-by-side with someone. I did that awkward thing where you look where the car is, and then your car just goes to where you’re looking. And then I crashed into his side door and put our car in the wall after, like, 12 hours. That was kind of bad.

How long ago was that?

I’d like to win a big, huge, iRacing-sponsored event. Not like they have any right now, but…

But I think with GTE being a favorite, and being European, I’d like to win Le Mans in any car in any split. Or Spa. Everytime I do Spa, we always do kind of okay. I think we got two top-tens in GT3. Yeah, either Le Mans or Spa, I’d like to win.

9. In the last interview, Ronny Nunez from Torque Freak Racing wanted to know what’s your favorite track and what makes you fast at that track. Is it your line? Is it your setup? Is it how aggressively you drive?

Okay, Ronny Nunez is fast at tracks. I just know tracks. I’ve never said I’m fast at any. What is my best track? I guess I was decent at Oulton Park in TCR. Or Donington. They’re just tracks I like. I’m not very good at them.

Why are they not using craigsetupshop.co.uk?

Alright, that’s a good one.

Corey: Craig, thanks a lot for the interview. It was a lot of fun. I hope you enjoyed it. For everyone out there listening, make sure to tune in next weekend as we have the first race of the season, the 6 Hours of Spa. We’ll have all sorts of coverage on neo-endurance.com for that, so make sure to come back then. Thanks again, Craig!

Craig: Thank you very much, guys.