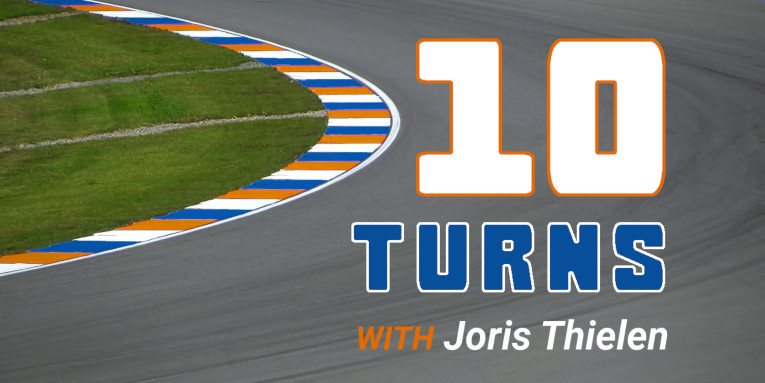 Welcome everyone to another edition of 10 Turns. Today, we’re joined by Joris Thielen. He’s from Team Buschfink Racing, and we’ve talked about Joris a lot this season in our race preview articles because he is a NEO veteran and a former winner, especially in the old Ford GT2.

Corey Davis: Joris, again, you’ve been involved with NEO for many seasons. Thanks a lot for joining us for this interview!

Joris Thielen: Thanks for having me!

I started sim racing in GTR, the original one. So I think it’s gonna be 2004 or something like that. It was a very local Belgian league that was running that one, and I joined them. They only had six or seven drivers but it was the first steps for me.

And when did you get started in iRacing?

I think it was 2013 or 2014 when I was finally starting working. I got some free time again after college. The bug grabbed me again and I was just looking for something that really was interesting, and iRacing was the one that popped up.

Sure, and I guess you got there pretty much right in time for the endurance racing, too?

Yep, my first big race I did was the NEO GT Series that had like three big races in the GT3s. One of those races was my first big one.

I’ve only been involved with two teams. It was Fenix [Motorsports], my previous one, and this one, Team Buschfink. Fenix was a much smaller team. At the end, you only had like four drivers left. It was very small. It’s a bit more close to each other. You only have those guys to work with, while with Buschfink, you don’t know which driver you will end up with each race.

I’m curious about this because I always struggled with the old Ford GT. How did you manage to drive that thing so quickly?

At the end, we had a very stupid setup where we were running a negative rake, and it was a very good way to get the car running around quite fast, especially when we were battling with SimRC back then. It was really a clash of the setups because they were running a really nimble setups and we were running like a tugboat. It was very strange to see the difference in setups.

Yeah, I think it was the Monza race one season where you saw pretty much all the Fords had the back end way at the ground and the front end up in the air.

The one I remember vividly was a few years ago when Toyota blew up their engine or their turbo with five minutes to go at Le Mans. It’s not really my favorite but the one I really remember the most vividly.

That was a disappointment. So were you pulling for Toyota in that one?

I was, yeah. I’m usually a Porsche fan but Toyota was working that hard for that victory, and I was really rooting for them as well.

I don’t think there is like one feature that would give me the… no, I would never have a chance against some of the other guys in the service, so I’m not really having a point in answering this question!

Personally, I would put you in the old Ford GT, so if there’s any track where you like that, maybe that’d be your best choice.

Not any more because the Ford GT has moved on since then as well. I’ve driven it a few weeks ago and it’s just a completely different car. I can’t use it any more, so no, the Ford GT is not my car any more. I have actually no idea. Spa is my favorite track, I can tell you that, so that’s something I would pick. That’s about it.

I should say pizza here, I guess, but no, it’s usually like some bread meal. Not too heavy, just so I don’t have any stomach aches or something while driving.

That makes sense. We’ve had several people this season that have said they don’t eat anything on the day of a race.

No, I would just faint in my rig, so no. I need something to eat and plenty to drink as well, because you lose quite a lot of fluid, for me.

7. What is the biggest change you expect to see in the world of sim racing over the next five years?

It’s gonna be more professional, even more than it is now, I think. You see the big esports teams stepping in, and people are getting attracted to the big prize money as well. For me, I just try to be an amateur, to have fun, but I think it’s getting a bit too serious for other people.

I think one of the Team Chimera people. I’ve always raced with those guys and we’ve always had some very good fun and good battles on track. It would be fun to be part of their LMP1s just to have some fun.

I guess since you’ve been in NEO every season, you’ve had a chance to race with them a lot because I think they’ve been involved since the start as well.

Yep. And also in several classes. I think they’re now only in P1, but they used to do a GT as well.

9. In the last interview, Nick Rowland wanted to know what class you will run in the next season of NEO.

I don’t know what the classes will be. If it’s gonna be the same classes, it will stick with the GT class. I’ve always been a GT driver and I always will be, I think.

Absolutely. And are you planning to stick with Buschfink, at least for the foreseeable future?

Yeah, I am. It’s a very fun group to be with. It’s a big group, but you always have someone to run a race with, so that’s one of the major plus points of that team.

10. Do you have a question I can ask the next person? I think I’m gonna try to get one of the P2 class champions, whoever that ends up being, if that affects your question.

If they want to step up to P1 if they get the championship?

Okay, interesting. Joris, it was great talking to you, so thanks a lot for joining us for 10 Turns!

Yeah, it was fun. Thank you for having me again, and good luck with the next few times of this!

Thanks, and good luck to you guys at Le Mans! It will be a fun race. I’m sure we’ll see each other on the track there!

Yep, see you there!

Thanks everyone for listening as well. Remember that we do have our season finale at Le Mans coming up later this month, so stay tuned here on neo-endurance.com at @NEOendurance on Twitter for all the coverage leading up to and then in the aftermath of the Le Mans race. So thanks again for joining us!