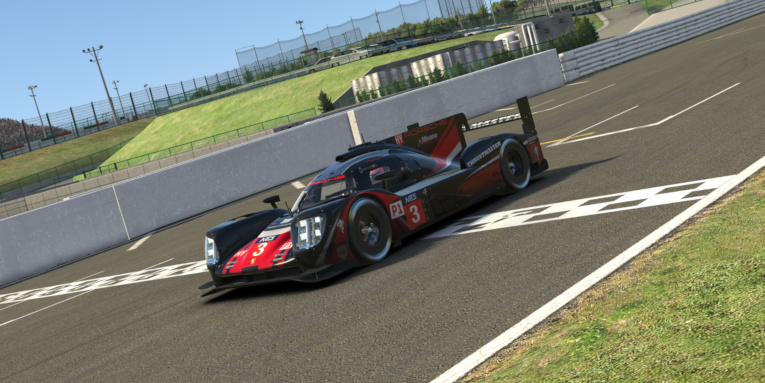 The newest class in the NEO Endurance Series will crown its first champion later this month in the season-ending RaceSpot 24 Hours of Le Mans, and thanks to the double points wrinkle for the longest race of the season, we don’t yet know who will take home the title.

Of course, there is a heavy favorite. Thrustmaster Mivano Racing’s #3 team has been in control of the class almost all season, and while their hopes of remaining undefeated in the P1 class were dashed in the last round at Spa, they’re still in great shape to wrap up the championship.

A seventh-place finish or better will do exactly that for Tommaso Carlà, Frederic Evers, Marcus Hamilton, and Patrick Schneider, but as Hamilton shared in our most recent roundtable discussion, “we’ll be keen to finish the season with another win”.

Their closest opponent in the standings is Porsche Basel by Sorg Rennsport eSports, who is winless this season but showed race-winning speed and potential at times, including in December’s race at Interlagos.

While Sorg’s title hopes likely depend on a Mivano DNF, they can lock up second in points by finishing at least one position ahead of the teams chasing them.

That includes third-place Race Clutch, which won last month’s 6 Hours of Spa. Although they’re carrying the momentum from that victory into Le Mans, they’ll face a close fight in the finale from SimRC.de, which is just two points behind and has finished ahead of Race Clutch in three of five rounds so far this season.

SimRC holds a 16-point gap over the fifth-place team, Mivano’s #4 entry who started the season with a promising second-place finish at Sebring but has failed to make it onto the podium since then.

Last season, Gabor Mecs and Maxime Brient from that team finished third at Le Mans, and they may need an equally strong result to hold onto a top-five position in the standings this year.

That’s because Wyvern Racing is just three points behind them, and despite some incidents and penalties throughout the season, their fourth-place finish at Suzuka led by Sai Andra, Michel de Jonge, and Nick Rowland showed their ability to race cleanly and quickly.

The fight for the final top-eight positions in points — which earn teams automatic invitations to season six — is a tight one, as seventh through eleventh are separated by just nine points.

The UI1-Positive SimRacing #28 team current holds that seventh position, and while they’ve finished every round this season, it may take more than a seventh-place result — their best of the season at Suzuka — to hold that secure spot in the standings with double points available.

They’ll have a bit of extra help at Le Mans, as the drivers from their #27 sister car, which sat last in the standings, have piled into a single entry for the finale.

Just three points behind them in the final qualifying position is MSI eSports, whose #13 Porsche 919 hybrid is coming off a season-best fifth place run at Spa for David Pérez and Alvaro Ramiro.

Currently on the outside looking in are Virtual Motorsport, who have shown some impressive strength as NEO’s only Audi squad this season but also suffered costly crashes at Sebring and Interlagos that could keep them outside of the top eight. They’ll need to find some extra performance in the e-tron quattro prototype at Le Mans to make up the two-point gap to MSI.

A further three points behind them is SimatoK eSport, which hasn’t shown the pace to contend for podiums this season but has points in all five races to keep them in the mix entering Le Mans.

One of the preseason favorites, Team Chimera, finds itself in an unexpectedly low eleventh position after a season plagued by bad luck and on-track mistakes. However, a long enduro and their solid top-to-bottom lineup of Joshua Chin, Jack Keithley, Simon Trendell, Ben Tusting, and Jamie Wilson could work to their advantage at Le Mans — as long as they can stay out of trouble.

Each of the teams behind them is more of a longshot to make the top eight, both because of the points deficits they need to overcome and the number of teams they need to leapfrog in the standings.

Perhaps the best-equipped among them is twelfth-place Odox Motorsport, which started their P1 campaign with a fifth-place finish at Sebring for Hugo Preto and Carlos Villegas. Struggles since then, including a DNF at Spa, have put them ten points behind the eighth position.

Thirteenth-place Torrent Motorsports peaked mid-season with a seventh-place run at Interlagos, and they’ll need a better result than that at Le Mans to have any chance at a top-eight finish.

They enter the finale tied with Romeo Grinnell, Sam Rosamond, and Elliot Skeer’s team — the former F4H Motorsport entry recently rebranded as Lazarus. Like the Biblical figure, they’ll need to rise from the dead — a no-show at Spa — and perhaps have a bit of help from above to contend at Le Mans.

VRTeRacing made it to the grid at Spa but not much beyond that, flipping over just past the start-finish line. That DNF sunk the chances for the rookie team even further.

The final team in the P1 standings enters Le Mans with a mathematical shot at the top eight, but that’s about all you can say for their slim chances. AVA Vervatic’s #23 team has three DNFs this season, leaving them on the sidelines while they watched their sister P2 car rack up wins.

After facing the tight confines of Interlagos and Suzuka and racing their spaceships into the night at Spa, the final new challenge this season for P1 competitors will be a 24-hour race.

Some of the top real-world teams have been knocked out or left heartbroken by troubles in traffic and equipment failures around Le Mans. NEO’s top prototype teams will be hoping the same fate doesn’t await them.