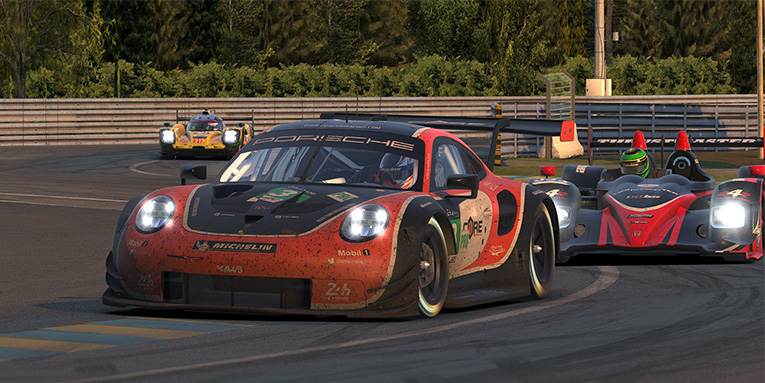 The first finishes of the new NEO season are now behind us with the passing of this week’s registration deadlines. Among last season’s top teams, fifteen have already secured their slots on the season five grid by using their invitations toward an automatic entry.

They’ll be challenged by their teammates in the #4 Porsche 919, which features the real-world racing expertise of Toyota LMP1 factory driver José María López and 2017 British GT4 champion Will Tregurtha.

Also stepping up to the LMP1 class are the fifth- and sixth-place finishers in last season’s prototype class. The all-Spanish lineup of Teo Martín eSports is set for a season in the Porsche while Virtual Motorsport is the only confirmed Audi R18 e-tron quattro on the grid so far.

Long-time NEO competitor Team Chimera will also join the LMP1 class, along with the drivers from last season’s tenth-place finisher, TeamGT Freem, who have made the move to UI1-Positive SimRacing for the coming season.

Just one of last season’s top-finishing prototype teams will return to the HPD for season five. IRDK Endurance, the ninth-place finisher the season four standings, will again be paced by Marcello Maio and Egil Sandfeld in the #55 prototype.

The other confirmed entry in this season’s LMP2 class received their invitation by winning their class in the DGFX Racing League last year. The MOATF Racing Podcast team makes their full-season NEO debut this season, and they’ve already spoken with NEO co-founder and series organizer Niel Hekkens on their podcast this summer.

The GT class is set for another strong contingent this season, with a mix of both Porsche 911 RSRs and Ferrari 488 GTEs on the grid so far.

Last season’s fifth-place finishers, MSP Phoenix Racing, return in the #84 car this season, although absent from that entry are Lukas Jestädt and Gregory Tanson. That may open the door for the defending sixth- and seventh-place finishers, SimRC.de and Thrustmaster Mivano Racing, to move up in the standings and potentially challenge for the championship this season.

Other top GT teams returning from last season include CoRe SimRacing in the #88 Porsche, a pair of entries for Williams JIM Junior, which inherited the automatic entry from CORE Motorsports, and the final team in the standings to earn an invitation, SRN Motorsports.

Noticeably absent from the grid are last season’s class champions, Pure Racing Team and Coanda Simsport. Hekkens noted that the decisions those teams face to run in multiple high-level series, including iRacing’s world championship competitions, was likely a factor.

“I understand them choosing those series over us,” he said. “We are just a league without big prize money. Of course, it’s a pity those teams are not returning, but it does give other teams the opportunity to join. Looking at the teams who registered now, the level is still very high.”

Other leagues such as the Sports Car Open, which is entering its second season, have also pulled away some of last season’s high-finishing NEO teams, but Hekkens said he expects NEO to remain true to its mission of offering teams and drivers an authentic endurance racing environment.

“Competition is always good, but at the same time, we are not competing with other leagues. We focus on our strengths and service. Our mission is to give the participants and viewers the same experience they would find in real life.”

“NES has turned out to be a major inspiration for other leagues,” added Hekkens. “I recognize a lot of assets or documents. The designer in me uses that to keep changing and improving our assets as well.”