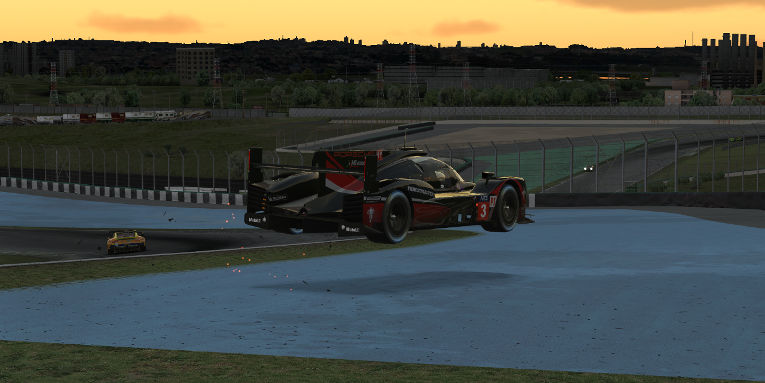 Being the fastest car on track sometimes comes at a price. At a short circuit such as Interlagos, the top prototype teams could have passed dozens or even a hundred or more slower cars than their mid-pack competitors over a six-hour race.

For the Thrustmaster Mivano Racing #3 P1 team that has dominated this NEO Endurance Series season so far, one of those final interactions in traffic put their race up in the air — quite literally — and threatened to derail their winning streak.

Before that late-race drama, Mivano’s pace again looked convincing in qualifying. Marcus Hamilton earned the pole position by a quarter-second over second-place SimRC.de, all while contending with the hottest track temperatures of the day that peaked at 53°C during the 20-minute session.

While drivers, spectators, and officials all awaited the first P1 trip through GT traffic for incidents to occur, it didn’t even take that long to see the first contact of the race. In the slow run to the green flag, the sixth-place starters from Wyvern Racing bumped the back of Mivano’s #4 entry, which earned them the first stop-and-hold penalty of the day.

In his recovery drive, Wyvern’s Sai Andra also earned the race’s second penalty for a late lane change in traffic that resulted in contact with the #68 Porsche. Andra’s spin collected the Race Clutch P1 car, and as driver Richard Arnaud recovered, he collided with the RacingCenter Vib3sports HPD and spun, adding insult to injury just 13 laps into the race.

It was part of a hectic start, especially for P1 teams as they negotiated a crowded track, at times going two- and three-wide to work past the slower classes. One such moment led to the largest crash of the race.

On lap 17, the Virtual Motorsport Audi exited turn 3 three-wide with an HPD and a GT car to its inside. Those tight quarters resulted in contact between the three cars that eventually blocked the track on the run to turn 4.

The Odox Motorsport P1 car was also damaged in the incident, as was Team Chimera’s Porsche, which suffered a heavy rear-end hit from the TNT Racing HPD. AVA Vervatic’s Michael Schwanzl avoided the initial incident, but he couldn’t dodge a spinning Williams JIM Esports Ferrari in the aftermath.

While that crash was a setback or a race-ender for a handful of P1 teams, several others found themselves much further up the field afterwards. MSI eSports’ David P Pérez was fourth after the first hour, while VRTeRacing’s new addition Jason DeVriese had the #20 Porsche in a steady sixth place, even leading a lap during the first cycle of pit stops.

At the front of the field, traffic largely kept Hamilton’s lead in check, and during the second stint, he had a new opponent filling his mirrors. The Porsche Basel by Sorg Rennsport eSports #18 Porsche 919 Hybrid driven by Mike Nürnberg passed SimRC for second on lap 13 and then closed in on Hamilton, cutting the gap to within a second by the second round of pit stops.

Both teams then changed drivers, and Sorg’s Dominik Färber had the pace advantage over Mivano’s Frederic Evers, taking the lead on lap 79. But the race swung back in Mivano’s favor when Sorg incurred a pit road speeding penalty, dropping them 15 seconds behind.

As that back-and-forth battle for the lead played out, two teams were busy charging through the mid-field. Steady driving by Arnaud and Balazs Remenyik put Race Clutch up to fourth place by the midway point of the race, and Michel de Jonge kept the nose clean for Wyvern and moved them up to sixth.

The final three hours saw several more shake-ups in the P1 running order, as well as a bit of controversy that shaped the outcome of the race.

First, VRT saw its best race of the season fade away one problem at a time. While holding down sixth place, Dylan Ian Mann clipped the #96 Ferrari exiting turn 3, which earned him a stop-and-hold penalty. Because they changed tires while serving that penalty, they received another drive-through.

Their most spectacular incident occurred with an hour to go. Racing side-by-side down the frontstretch with the #27 UI1-Positive SimRacing car, DeVriese and Ricardo Orozco made contact — which the officials deemed was Orozco’s fault — that sent the lime-green PSR car flipping into the catchfence and ultimately out of the race.

The stewards also came calling for the race leader. While protecting a narrow half-second lead over Hamilton, Färber went beyond the kerbing exiting turn 3 to pass a GT car, which earned him a drive-through penalty.

Mivano then re-took the lead and had a 30-second advantage over SimRC once the final pit stops were completed. However, with just six laps to go, an off-track excursion nearly ended their chances at the win and at finishing the race entirely.

While passing the Altus Esports Porsche around the outside of turn 11, Hamilton had to take to the grassy shoulder, which soon dropped away and left his Porsche flying five feet into the air before landing hard on the pavement and against the tire wall.

The resulting damage left the car nearly seven seconds off pace, but it was just fast enough with so few laps remaining. Hamilton and Mivano limped home to win by less than five seconds over Claudius Wied and SimRC, with Sorg 24 seconds back and wondering what could have been if not for their time spent serving penalties in the pits.

After a bumpy start, Race Clutch had a quiet but solid ending to finish fourth. The fifth-place battle was also settled by a late penalty, with MSI touring the pit lane for track limit violations with a half-hour remaining. That put Mivano’s sister #4 car in fifth and MSI in sixth.

The Torrent Motorsports P1 team made a blinding start, with Erik Vizi climbing from fifteenth to eighth on the first lap. Despite a last-lap crash for teammate Norbert Leitner just a few hundred meters from the finish line, they held onto seventh place at the race’s end.

SimatoK eSport couldn’t find the speed needed to contend in this round, leaving them in eleventh, six laps behind the winners. Two teams caught up in the early crash — AVA and Odox — were behind them in twelfth and thirteenth, respectively.

F4H Motorsports saw their race come to a frustrating end. While running inside the top ten with a half-hour remaining, driver Romeo Grinnell lost control all by himself on the frontstretch, sending his car flipping and back to fourteenth place after extensive damage repairs.

Two P1 teams failed to finish. UI1-Positive SimRacing’s #27 team and Virtual Motorsport both retired after their respective crashes, leaving them fifteenth and sixteenth. Chimera’s frustrating season continued, and after being caught up in the early pileup, they finished seventeenth and last in class.

While a few teams dropped out due to damage, it was largely a clean race for the P1s. They accounted for just six of the 15 avoidable contact penalties, and given their quick pace and the amount of multiclass passes during a six-hour race, that’s fewer than most observers would have expected.

Of course, any of those interactions gone wrong could have been disastrous, as Mivano nearly found out in the closing laps. While they escaped Interlagos with their undefeated record in tact, on their way out of Brazil, perhaps Hamilton and Evers should pay a visit to Rio de Janeiro’s famous Christ the Redeemer statue.

Considering their opponents’ strong pace, a late penalty that gave them the lead, and a twilight crash that somehow didn’t warrant a meatball flag, it sure seemed like they had a little help from above.