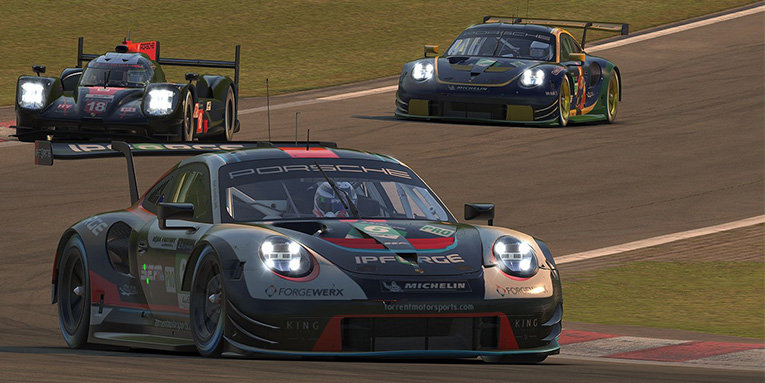 It’s set to be a GT jungle out there in season five with a super-sized grid of 21 GTE teams making the cut for the NEO Endurance Series. From the largest class, we expect the most excitement, especially if last season’s entertaining GT battles were any indication.

Any of the teams listed among these seven are strong contenders to capture race wins and fight for the season-long championship. Frankly, it’s almost impossible to pick a favorite among them!

The highest-placed team in last season’s standings returning for season five is the team formerly known as MSP Phoenix Racing, and after a switch from the Ford GT to the Porsche 911 RSR, they should be even more competitive than ever.

They have two teams on the grid — Team Eighty-Four featuring the likes of Markus Papenbrock and Julien Grünastel, and Team Eighty-Five, which Gregory Tanson and Lukas Jestädt drove to a convincing victory in the pre-qualifying race. Both teams have the talent and experience to contend for podiums and race wins this season.

Not far behind them at the end of last season was SimRC.de, which returns to the GT class but also switches to the Porsche. While Gianni Vecchio left the team in the off-season, they return much of the same lineup that finished sixth in season four, including Jürgen Frank, Dustin Hickmann, and Johannes Maiworm.

The Williams F1 team’s eSports affiliate, Williams JIM Junior, brings a pair of Ferrari 488 GTEs to NEO this season. Their #96 entry recovered from a pair of DNFs early last season to finish eighth overall, and from top to bottom, they have a stacked lineup including the always-quick Sebastian Dunkel, Mikko Melkkilä, and Dado Opacak.

Their teammates in the #97 car include some newer faces to NEO competition, but the off-season addition of Moritz Löhner from the since-shuttered Heusinkveld CORE Motorsports should put this team in a position to contend right away.

While several teams such as JIM moved on from the Ford GT after last season, the blue oval didn’t scare away everybody. Two returning teams made a late switch to the Ford to ensure a three-make presence on the grid in the GT class.

Thrustmaster Mivano Racing, which placed seventh in the standings last season driving the Ferrari, brings back most of that lineup — including long-time NEO drivers Anders Dahl and Stefan Muijselaar — in the #69 Ford GT.

CoRe SimRacing also opted for the Ford, and they’ve merged their two GT teams from last season into one. Flying Finns Kimmo Suominen, Santeri Kallunki, and Janne Kiuru all return, and while they’ll miss the loss of Ricardo Castro Ledo, who departed to join Coanda, the recent addition of Kenny Roosens adds some extra speed to their already-quick lineup.

The second- and third-place teams in the pre-qualifying race also expect to contend in the GT class. The Spanish squad of Odox Motorsport includes three 7k+ iRating drivers — Ricardo Ferreira, Andreu Rodriguez, and Jesús Sicilia — while GT endurance racing veterans TRITON Racing bring a Polish flair to the grid with their own 7k stars, Marcin Skrzypczak and Kamil Franczak.

One of the more entertaining battles in the pre-qualifying race was between MSI eSports and ZENNITH ESPORT. They’ll have their Porsches on the grid for the full season, with MSI pitting their veterans Marc and Adri Perez against ZENNITH’s up-and-coming talents of Rodrigo Lisowiski and Erick Goldner. Together with Altus, they’ll also fight it out to determine the correct capitalization of “esports”.

One of the dark horses this season in the GT class could be SimatoK eSport in the #78 Ferrari. They put together a quiet but effective pre-qualifying campaign that included a third-place ranking in PQ1 and a drive from ninth to fourth in PQ2. While their lineup may not feature many familiar names for those outside the French and Benelux clubs, they also have no obvious weak links, meaning they should be a threat no matter who is behind the wheel.

Another Ferrari team — Redface Racing by MXS Engineering & JRT — went the wrong direction in PQ2, falling from their fifth-place starting spot down to fifteenth after a bump from a P1 car in the esses. However, the qualifying pace from Benjamin Gonzalez showed their potential, and with fellow Frenchmen including Bastien Remise and JRT creator Joel Guez in the lineup, they should have a fighting chance at good finishes in the GT class.

Two other teams who were snakebit in the pre-qualifying race and finished near the bottom of the field were Torrent Motorsports and Euphoria Drivex Racing. They both showed a competitive mid-field pace in PQ1, placing eleventh and thirteenth, respectively, and they both bring endurance racing experience with drivers like Torrent’s Filip Mitrevski and Euphoria’s Roque Garcia.

With such a strong GT field from top to bottom, it’s tough to put any teams at the bottom of the rankings. Instead, consider these final five teams wildcards who will hope to challenge within the competitive midfield and beyond.

Perhaps the drive of the PQ2 race belonged to Torque Freak Racing’s Tim Claessens, who made pass after pass to land their Porsche in fifth place. Not to be forgotten, though, was the effort of teammate Chris Fuller, who moved from 16th place at the start inside the top ten by the end of his opening stint. Torque Freak’s biggest question could be its depth, with only three drivers — Ryan Driedger is the third — in its GT lineup.

You can’t talk about Torque Freak in a GT preview without mentioning their perennial friendly rival and shadow on the race track, SRN Motorsports. Last season, SRN eked out twelfth in points ahead of TFR, and an off-season switch from the Ford to the Ferrari promises to bring more speed and comfort for their returning four drivers. Editor’s note: The author of this article is a driver for the SRN Motorsports GT team.

The birdies are back in NEO this season! Team Buschfink Racing will field a Porsche in the GT class after finishing ninth in PQ1 and eighth in PQ2. However, it remains to be seen how the recent departure of Antti Ahola to Vendaval will affect Buschfink’s NEO effort and its depth this season.

Finally, two teams hoping to spring some surprises in their first NEO seasons are the Army Racing Team and Porsche Basel powered by Sorg eSports, which placed thirteenth and fourteenth, respectively, in the pre-qualifying race. Both teams enter the season with talented lineups, from Army’s Jan Wiechowski to Sorg’s Patrick Baaden. However, they struggled to find top-ten pace in pre-qualifying, so they’ll need to get their Porsches perfected to contend this season.

The deep GT field promises to deliver tight racing from front to back, which will make mistakes even more costly and the fight for every position even more challenging. It should be fun for teams, drivers, and viewers alike from the green flag at Sebring to the checkers at Le Mans.