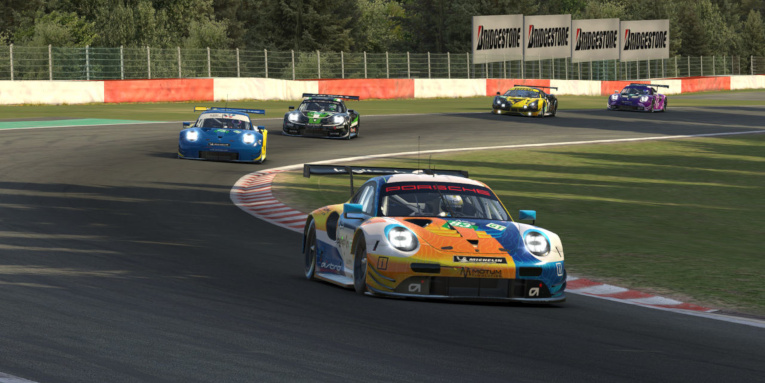 Entering this season in the ultra-competitive GT class, we thought veteran experience may be an advantage in the title fight that promised to be a tight one.

Instead, three teams in their first full NEO Endurance Series seasons sit atop the standings entering the RaceSpot 24 Hours of Le Mans later this month, so the championship will likely come down to which rookie team can best handle the season’s longest race.

Each of those Porsche-driving teams has gotten into title contention by doing things slightly differently.

The points-leading MSI eSports team started with a shaky debut at Sebring, falling from a fourth-place battle to ninth place after a late-race penalty. However, they’ve been the model of consistency and clean driving since then, with third-place finishes at COTA and Interlagos followed by runner-up results at Suzuka and Spa.

The only hotter team in recent rounds has been Logitech G Altus Esports, but their feast-or-famine season has put them five points behind MSI entering Le Mans. They’ve looked unbeatable in dominant wins at COTA, Suzuka, and Spa, but bad-luck contact from a P1 car at Sebring and a penalty-affected fourteenth-place result at Interlagos have shown they’re not invincible.

If they can avoid similar incidents at Le Mans, though, Simone Maria Marcenò and team could be poised for a come-from-behind championship victory. The 24-hour distance should be an advantage for Altus. They earned both GT class wins in January’s Daytona 24, and all five of their current NEO drivers tasted victory in that race.

Thirteen points behind MSI but still in contention due to the double points on offer is TRITON Racing. They started the season with a pair of second-place results but have faded since then, finishing no better than sixth in the last three rounds. It will take stopping that slide — and earning their first win — for the Polish squad to take the championship.

More than 20 points out of the lead, it will likely take a win and a bit of help for the next two teams to take the title, but the veterans from both Thrustmaster Mivano Racing and CoRe SimRacing are still competing to see which one of those heavyweights will be the higher finisher in the Ford GT.

Like many other GT teams, each of these entrants could play the “what-if” game and wonder where they might stand if not for some bad luck throughout the season. Mivano has three fourth-place finishes but also a DNF after a self-spin and crash at Suzuka, while CoRe won at Sebring and Interlagos but crashed out at Suzuka and Spa. In any case, they find themselves separated by just two points, so there is still plenty for the only two Fords to play for at Le Mans.

The highest-placed Ferrari team is just one point behind CoRe. Redface Racing has driven a quiet but efficient season, tasting the top five at Interlagos and flirting with it in several other rounds. With another strong result at Le Mans, Joel Guez and company could sneak into the top five in the standings.

The Porsches of S2V Racing and Euphoria Drivex Racing are seventh and eighth in points, and in position to earn automatic invitations to season six if they can hold those spots. Each team has a podium to show for its season so far, and another one at Le Mans could help lock up a top-eight overall finish.

Although the GT field has been closely matched all season, the points show a fairly large margin between the top eight and everyone else. Euphoria is ten points ahead of SimRC.de, whose mid-season slump after a Sebring podium dropped them out of the top eight.

One team on the rise in the GT ranks has been the Williams JIM Esports #97 Ferrari driven by, among others, Agustin Canapino, who made his real-world debut in the Rolex 24 earlier this year. While a sluggish start to the season hindered their top-eight hopes, look for this team to convert their momentum into a strong finish at Le Mans.

Perhaps no team has better embodied the plight of a mid-field GT team than ZENNITH eSport. The rookie Porsche team has been on the verge of the top five all season, but they have only one finish that strong — at COTA — due to penalties, contact, and crashes along the way.

Brazilians Erick Goldner and Rodrigo Lisowiski, along with their Iberian teammates, have been fun to follow all season, so even if they can’t overcome a 15-point deficit and find the top eight in points, it will be interesting to watch them try.

Just one point behind them in twelfth position is SRN Motorsports, and barring a Mulsanne miracle, the veteran GT team is likely to miss out on an automatic invitation for the first time in five NEO seasons. Instead, they’ll look to top their season-best eighth-place result from Interlagos and Suzuka.

The remnants of MSP Phoenix Racing reorganized as the nondescript Team Eighty-Five and Team Eighty-Four this season, and with one race to go, they have a new identity yet again. Now under the leadership of endurance racing veteran Frank Biela, the pair of Biela Racing Team EURONICS teams will hope to reverse their season-long struggles and improve from thirteenth and fourteenth in the standings.

While it doesn’t carry any sort of bonus, the fight for fifteenth in points is a close one. Porsche Basel by Sorg Rennsport eSports and Torque Freak Racing are tied for the position with 18 points a piece, and Torrent Motorsports is just one point behind them.

All three teams have had top-ten pace but little consistency this season, so whoever can assemble the most complete race at Le Mans is likely to capture that final spot in the top fifteen, as ceremonial as it may be.

The recent withdrawal of eighteenth-place SimatoK eSport’s GT team means their Ferrari won’t be on the grid at Le Mans. We do expect to see the final three teams in points — Odox Motorsport, Williams JIM Esports #96, and Team Buschfink Racing in the season finale to end an otherwise frustrating season on a high note.

The largest class in the NEO field is set for another exciting race at Le Mans. No, the big boi BMW M8 won’t be on track, but perhaps that’s good news for this season’s competitors, as it leaves even more room to fight over 24 hours.