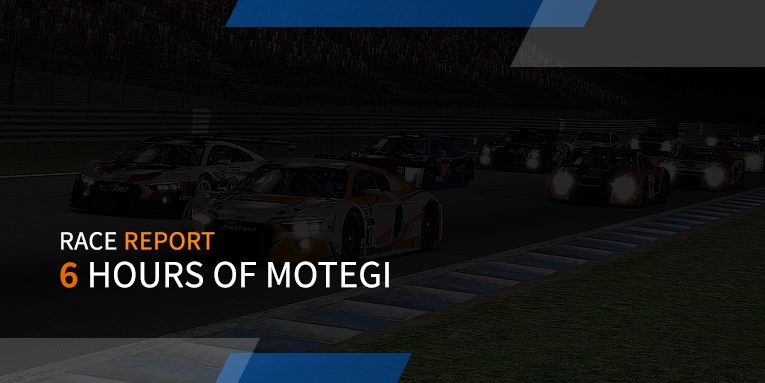 Round 3 of the NEO Endurance Series took us to Motegi. It’s the first ever NEO race on Japanese ground. Speaking of firsts, this was the first night race in the history of the series. A night race introduced a lot of new challenges for the drivers, for example the colder temperatures and less visibility. In Prototype it was VRS Coanda Simsport on pole, with CoRe SimRacing just 0.005 seconds behind. The #3 Thrustmaster Mivano Racing Team HPD lined up third and Pure Racing Team LMP White completed the second row. Friction Racing gained a couple of spots by being aggressive at the start, but the top 2 remained the same. Troubles for Radicals Online who were caught up in a lap 1 incident, collecting the #7 car on its way. Through the first half an hour, the gap between the leading 3 fluctuated massively, however when it was nearing pitstops, it all closed up to within 2 seconds. A misunderstanding between CoRe SimRacing and Odox Motorsport GTS meant they had an incident. As the pitstops happened, the top 3 were separated by 5 seconds, the most all day, but after the pitstops we had a completely different leader. It was Pure Racing Team White who didn’t take tires in the cold yet humid conditions. Coanda also lost a position to Friction Racing. Mitchell deJong, at the wheel of the number 1 car, got past Friction however on the hour mark. 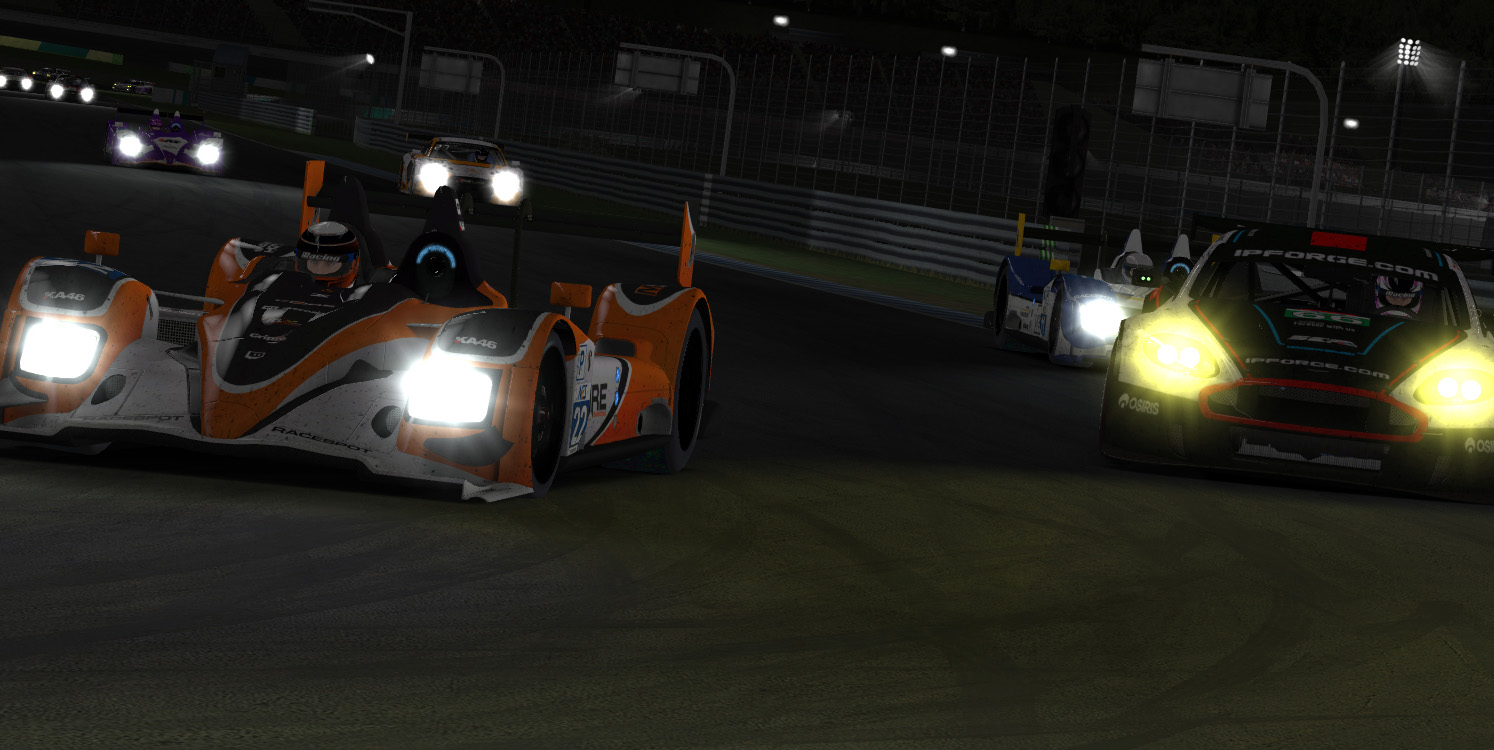 While Coanda were on the charge, CoRe SimRacing were hounding the back of Fricition, but couldn’t seem to get past. Finally Frederik Rasmussen did, and he was now on the attack of Pure Racing Team. But Marcus Hamilton fought back by using traffic to his advantage. Just as pitstops approached, Coanda Simsport attacked Pure Racing Team LMP White for the lead. Coanda managed to get past, with a little help from a GT, took the lead before pitstops. Unsurprisingly Maximilian Benecke in the PRT White HPD came in first, mainly to get off those worn out tires, and fill it up. However they short filled, got back track position, and the battle was back on. To add to Coanda’s woes, the CoRe SimRacing car split them, and now there were three cars battling for the lead. Everyone had new tires, and it was a straight fight, two hours in. But, bad luck struck PRT White again. An Aston Martin pulled across in the braking zone, and damaged the suspension and front nose of the car, putting them out of contention. This promoted Mivano into third.

CoRe Simracing were being reeled in once again by Coanda Simsport, however the gap was 11 seconds at the halfway stage. Thrustmaster Mivano Racing were 40 seconds off the lead, and PRT LMP Black made their way into 4th. Through another hour they went and suddenly the 1 car was on the back of Santeri Kallunki in his 22 car. DeJong made his around the outside at turn 3 and 4 and wheel-to-wheel for 5 corners in a row. It was DeJong who got the lead however. The gap was 5 seconds, and after the penultimate pitstops and final driver change, it was 4 seconds. With an hour to go, Rasmussen was on the back of Coanda Simsport and the battle was on. But unfortunately, it ended in contact. Coanda hit the back of a GTS Audi, and lost 23 seconds. Luckily the car had no damage, and it didn’t stop there. Two GT’s collided in front of them, and had a small bump but got away with it. After that, Coanda had to pit and dropped to 4th. Hopes of a third championship seemed to be slipping away, even at this early stage. Friction Racing needed a splash of fuel at the end and this brought Mack Bakkum in the Coanda car up to 3rd again. At the front it was all CoRe SimRacing, 58 seconds out in front, and would take the checkered flag first. However the drama hadn’t ended there. It turned out that after the race CoRe had infringed the driver time limit, and received a 2 lap penalty. This promoted Thrustmaster Mivano Racing Team into a surprising victory, showing that a clean race can get you a big result in an endurance race. Coanda Simsport finished as 2nd, and Friction Racing in 3rd. That puts Coanda back on top of the championship by 5 points to Thrustmaster Mivano Racing Team. CoRe SimRacing, PRT Black and Team Chimera closely follow them, as the Top 5 are within 11 points of each other.

In GT it was CORE Motorsports who took pole under the lights by 2 tenths of a second to Coanda Simsport in the highest placed Corvette. The rest of the Top 10 were Aston Martins, separated by just 1 second. Torrent Motorsports got the jump off the start as they moved ahead of Coanda in a battle that would rage right until the end. The field quickly got into single file, and settled in for a long race. Kevin Siggy in the Torrent Motorsports Aston was forming a train that were running around together, but nobody seemed to make a move. When the Prototypes came through, and the GTS field was passed, the Torrent Motorsports and Coanda Simsport car pulled away from the rest of them, forming a two way battle for 2nd. Team Chimera’s #54 GT Aston Martin had a very bad first half hour, hitting a spun Xen Racing car, damaging the suspension. The battle for 2nd was on, coming down the home straight there was lots of weaving, Rens Broekman went to the outside for turn 1. Both cars made contact and this spun the Corvette around. Coanda rejoined in 5th. They made their way back to 4th quickly enough though, getting past Rubagalline Racing at turn 1. The only change before the first round of pitstops was the defending champions were into 3rd place, however 10 seconds off the lead car, CORE Motorsports.

After the pitstops not much changed, apart from Coanda who had made their way into 5th place, dispatching of Sim.RC.de Crimson. The Radicals Aston made a mistake at the tricky last corner, and Jörn Jens was back 4th. A great race for Rubagalline Racing was ruined with a spin into the barrier, ending any hopes of a dream result for them. Just before the second round of pitstops, that resilient Corvette of Coanda Simsport made their way back to 3rd. With 3 and a half hours to go, CORE Motorsports had built a gap of 27 seconds, however we’ve seen before that anything can happen in endurance racing.

An average day for SimRC.de Iris got worse with a small spin at the hairpin, a disappointing race for the reigning GT2 Champions. A fuel only for Coanda jumped them to second, however they were being caught by Torrent Motorsports. They did get that pass done however, with just 5 minutes until the pitstop window, but some ground was definitely gained by Coanda. More pitstop strategy from Coanda. He short filled in that pitstop, getting track position over Torrent again. That gap remaind close, but no passes were made, and it was down to the pit crews once again. But just before they got there, Siggy snuck ahead as they entered the pits side by side. Jens with an audacious pass on pit entry, and he got a little bump for his troubles too. But it didn’t matter, as Coanda took no tires again, they stretched an 11 second gap. With half an hour to go, the gap was 2 seconds, and it kept coming down. But with 20 minutes to go, Siggy passed the Coanda car. To emphasise CORE Motorsports’ dominance, they came in for a splash late on, and retained the lead. An incredible drive by those guys in their purple and yellow Aston Martin. And they did indeed take the checkered flag first and the full 20 points, ahead of Torrent and Coanda. It’s even closer at the top of GT, as Torrent Motorsports and CORE Motorsports are tied on 50 points, with Coanda trailing them by just 9 points.

Atomic could not cash in the pole position

In GTS it was a surprise pole for Atomic Motorsport, with championship leaders Pure Racing Team GTS in 4th. Thrustmaster Mivano Racing Team grabbed 2nd, and CoRe SimRacing started from 3rd. At the start Atomic Motorsport got the jump but it was three-wide behind, but Thrustmaster Mivano were shuffled down to 4th, but quickly got back past Pure Racing Team. When the Prototypes filtered through, Core Simracing had some contact which dropped them to 8th. Just before the pitstops Shinya Michimi Simracing drove in 4th place, with both MSP-DRIVERS HOME cars, Core Simracing and Team RSO all in a big battle for 5th. Pure Racing Team GTS were on a fuel only strategy and had a 30 second lead after an hour and a half. 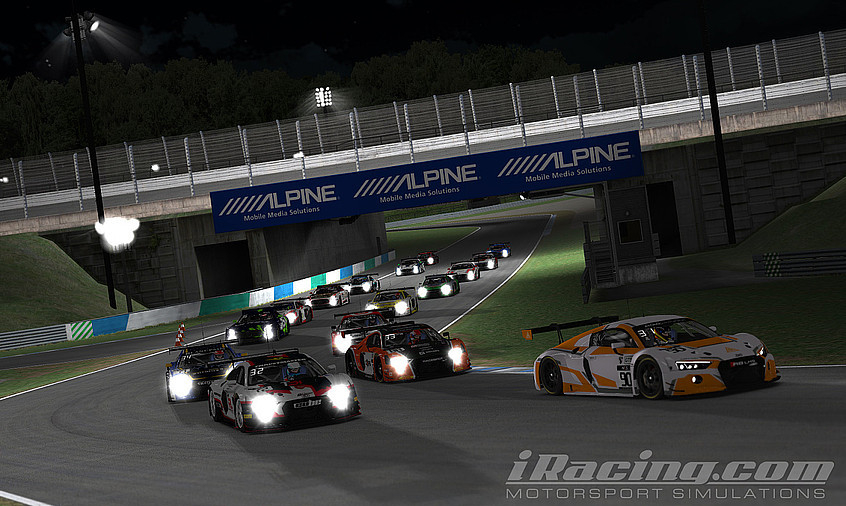 When PRT pitted, Mivano and Atomic were set to battle. But instead of fighting it out on the track, they took it to the pits. Thrustmaster Mivano jumped them, with a faster pitstop. Thanks to the off sequence strategy Pure Racing Team Audi were now only 25 seconds to the good, as they were being hunted by the following Audi’s. Another round of pitstops, and another fuel only stop. This time it was the MSP-DRIVERS HOME 83 car who came out in the lead by 6 seconds. They successfully gained time, moving into 4th. With 2 hours to go, Atomic Motorsport took no tires, putting them in first. A great job by them jumped them back to the top, but everyone was waiting to see where PRT GTS would come out after their last stop. But an incident for Atomic Motorsport crushed their winning hopes.

This promoted Shinya Michimi Simracing into 3rd, after a series of bad luck, they were on for a podium. But that Pure Racing Team stop never came, a great job by all of the drivers and strategists at that camp to keep up the pace, and save heaps of fuel on the way. They would win by well over a minute, with Thrustmaster Mivano Racing Team coming in second, and Shinya Michimi third. Atomic Motorsport recovered to 4th, and the highest Mercedes was MSP-DRIVERS-HOME 83. It’s total domination for Pure Racing Team in the GTS Standings at the moment, but with 36 hours of racing still to go, anything could happen.

Full results and championship standings are available on the website. The race is also available on demand in the NEO race archive.
The fourth round of the NEO Endurance Series takes place at the iconic Nürburgring on January 15th at 15:00 GMT. This race will be broadcasted by RacespotTV on iRacing Live.