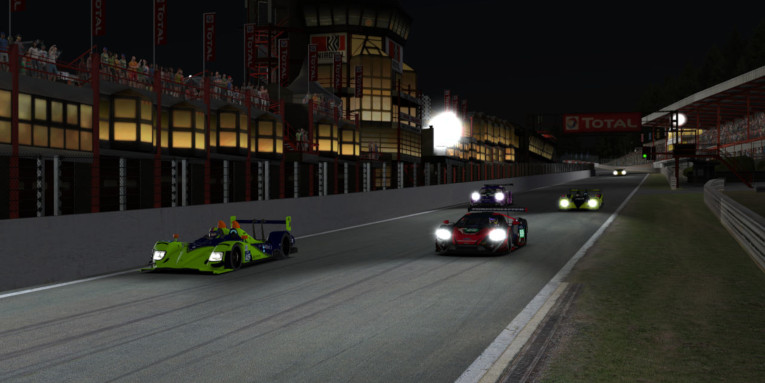 The Spa race featured fantastic finishes in both prototype classes. Was your team watching those battles late in the race, and if so, what did you think about them?

Marcus Hamilton, Thrustmaster Mivano Racing #3: Yes, I literally couldn’t take my eyes off the battle for the race victory, otherwise I’d have crashed! But on a serious note, it was a lot of fun to try and chase down Race Clutch for the win. At no stage did I actually think it was doable, though. In the end, I got a lot closer than I dreamed possible. They were genuinely ultra-quick this weekend so they won on merit, and there were definitely a few things we know we could have done better, which we’ll reflect upon before the next race.

Nick Rowland, Wyvern Racing #25: The team were heavily tuned in to the P1 battle and were enthralled by a great finish. Congratulations to Race Clutch.

Joonas Vastamäki, Inertia SimRacing Corsac #59: Unfortunately we weren’t watching them since we were beating each other for our poor performance(s).

Only four teams were penalized for track limits violations at Spa. Did your team find it easier or more difficult than expected to avoid off-tracks?

Richard Arnaud, Race Clutch #15: We had prepared that a lot, so it wasn’t an issue for us, even if Spa is the easiest track to take those 1x’s.

Marcus Hamilton, Thrustmaster Mivano Racing #3: We found it pretty straightforward to stay within the off-track limit. Overall it looked like it was set at exactly the right level, so no complaints here!

Joonas Vastamäki, Inertia SimRacing Corsac #59: It was quite easy to avoid getting 40 off-tracks since we retired about 90 minutes in.

Nick Rowland, Wyvern Racing #25: More difficult. We suffered with understeer all throughout testing and never cured it.

Entering the double-points season finale, how is your team positioned in the standings for a championship battle or a fight for a top-eight position in your class?

Marcus Hamilton, Thrustmaster Mivano Racing #3: We’ve obviously had a strong season to date and hold a healthy lead going into the season finale. We’ll be keen to finish the season with another win, though. We’re not interested in just cruising around to pick up the P7 we need to secure the title, irrespective of how others do.

Richard Arnaud, Race Clutch #15: Mivano is far ahead and a miracle needs to happen if we want to win the championship. We are currently P3, 6 points behind P2. As a rookie team, I guess a runner-up position could be a great achievement. A top eight is secured, so maybe we will expect more next season!

Nick Rowland, Wyvern Racing #25: We enter the race in P6, so we will have absolute focus on locking in a top-eight finish. We want to do everything we can to secure that position.

Joonas Vastamäki, Inertia SimRacing Corsac #59: Without the double-points finale, we would be in a pretty much impossible situation to secure an invite. We need to score at least a podium to have a strong chance of top-eight finish.

Will you approach the 24 Hours of Le Mans any differently than you have with the six-hour races this season?

Nick Rowland, Wyvern Racing #25: Day/night will be the biggest challenge yet. Concentration will need to be at a maximum. The approach won’t change but the testing time will likely increase.

Joonas Vastamäki, Inertia SimRacing Corsac #59: For starters, we would love to find a fourth (possibly even a fifth) driver, but we don’t know who to race with yet. Twenty-four hours requires more planning with tire stints, since the track gets cooler and then warmer. It should also be more challenging to find a good setup for all kinds of conditions.

Richard Arnaud, Race Clutch #15: The biggest challenge will be the day/night transition to set up the car. In six hours, even if there are weather changes, it is not as extreme as in a 24-hour race. So it will require a bit more work to set up the car for mixed conditions. For the rest, our strategy calculations, stint simulations, data analysis, etc. will be similar. Week 11 in iLMS will be also a great first test to see where we are in the hierarchy and practicing traffic. Even if it is only a one-hour race, there will be a lot to learn.

Marcus Hamilton, Thrustmaster Mivano Racing #3: I think it’s quite different in terms of approach. Car setup for one will be quite unique to this track, organizing the driver roster to suit everyone’s schedules is never straightforward, and everyone will need to practice both day and night conditions. To do it right will require a lot of effort and preparation, but I think we’re all really looking forward to the challenge.