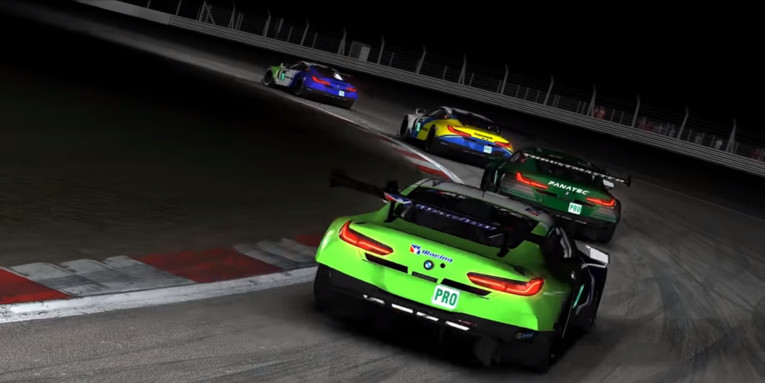 Okay, let’s start by addressing the elephant in the room: the jokes about the BMW M8 GTE.

“How will NEO enforce blocking when it already takes up the entire width of the track?”

Yes, the biggest 2018 motorsports meme this side of “Valtteri, it’s James” is on its way to iRacing, but jokes aside, the newest car in the GTE class should be a serious contender in the virtual world just as it has been in the real world.

The winner of this year’s Rolex 24 and last season’s races at VIR and Laguna Seca continues to roll over the competition in the IMSA WeatherTech SportsCar Championship, and it will make a splash when it lands on iRacing in next week’s season two build.

A laser-scanned version of BMW’s latest-generation turbocharged V8 contender will be available for purchase on Tuesday after the scheduled build deployment.

To accommodate the car in next season’s IMSA series and iRacing Le Mans Series, each will expand to include seven cars, including the four-make GTE class.

Naturally, NEO competitors can also expect the M8 to wind up in the season-six car lineup. There’s just one question left to be answered: Will you need a commercial driver’s license to drive this bus of a car?

The BMW may be the biggest feature in the build, but it’s far from the only change that iRacers — and especially NEO competitors — will notice.

One will be evident from the time you sit in your virtual car. A new engine model better simulating low-RPM stalls and an updated startup sequence — with sounds to boot — will be introduced.

While an anti-stall aid will remain available, drivers who seek maximum realism can disable that option and ride out some potentially jerky starts and stalls if they aren’t precise with their throttle and clutch application.

Once you’re behind the wheel and on the track, you might notice some new visuals courtesy of the preliminary version of High-Dynamic Range (HDR) rendering in this build.

While additional effects are planned that will eventually use this functionality, drivers enabling this option now — which will use some extra video memory — may still notice a change, especially with the sun’s reflections and other bright features.

“HDR rendering allows the bright pixels to be rendered without loss of information, and used during many internal rendering steps, limiting the loss of brightness to only the final step of converting to the display,” according to the build release notes.

Among the typical litany of minor updates to various cars and tracks in this build are a first pass at night lighting for the Nürburgring and Nordschleife, updated versions of the Daytona and Charlotte oval and road circuits, and a Balance of Performance tweak to the Porsche 911 RSR GTE car that reduces both its drag and aero downforce.

Before rolling the new tires out to more cars, iRacing is seeking feedback on its Skippy implementation. So as the NEO season comes to a close later this month, iRacing’s top drivers within the series may want to turn their attention to a decidedly lower-power open-wheeled car to get a taste of the tires that should eventually equip our prototype and GT machinery.

One highly anticipated feature that won’t make this build is the new damage model. However, senior software engineer Richard Jobling recently posted a progress update on the iRacing forums.

To handle the updated damage model, every collidable object — from the track surfaces to walls and cones to the vehicles themselves — have had their art and physics updated. Developers continue to “tune and balance damage for all vehicles in the service”, according to Jobling, and update smoke, debris, and sound effects for those sorts of collisions.

“We think we have a realistic shot at completing everything needed in time for an initial launch before the end of the year,” said Jobling.

Another future update that iRacing recently teased was its latest track scan — the Circuit de Catalunya, located near Barcelona, Spain.

While NEO was at the Spa circuit for last month’s six-hour race, the iRacing team was at its European cousin to collect “millimeter accurate laser scan data and photographs,” per Greg Hill, the vice president of art and production.

The Spanish track just finished its traditional two-week stint as the venue for Formula 1 winter testing. Along with the F1 Spanish Grand Prix, MotoGP Catalan Grand Prix, and its FIA World Rallycross Championship round, Catalunya has in the past been visited by the European Le Mans Series, which gives it the pedigree to potentially host NEO once its virtual version becomes available.

The championship leaders in each class managed to protect their points leads, but only one of them did so with a victory. That allowed first-time winners to prevail in two of the classes.

Among the P1s, SimatoK eSport’s tandem of Tony Repussard and Julien Ribouleau drove their Audi R18 e-tron quattro to the overall win for the first time this season. SpeedWerx Racing Team and GermanSimRacing finished second and third.

While the class points leaders from Kinetic Racing came home a season-worst fifth place, they still finished one spot ahead of their closest championship competitors from GTTempel Racing.

In the P2 class, Team Heusinkveld continued its domination, with Ronny Fantini and Christian Kiewitt earning the team’s fourth consecutive victory. In the past three of those wins, they’ve been chased to the line by second-place vApex Racing Team, who remain second in the standings trailing by 17 points. GermanSimRacing finished third among the HPDs.

The other breakthrough winner at Road Atlanta was FitzSty Motorsport, whose pairing of Sam Fitzpatrick and Nick Madsen wheeled their Ferrari 488 GTE to the GT Pro class victory. The points leaders from Graphite Racing were second and hold onto a 20-point edge over GermanSimRacing, who completed a third-place sweep in three classes.

With double points on offer in next weekend’s 10 Hours of the Nürburgring, none of those points leads are safe, so the three automatic invitations to the NEO 24 Hours of Le Mans will be decided in the season finale.

The two world championship road racing qualifying series wrap up this weekend, but several teams and drivers already know they’re in good shape to advance to those big-money championships later this year.

After scoring top points in the last round at Interlagos, CoRe SimRacing Black‘s Ross Balfour and Thomas Gibson have their team second in points.

Other current NEO teams inside the top ten include Williams Esports BenQ in third, CoRe SimRacing Orange in fifth, MSI eSports Blue in sixth, Astro Gaming Altus Esports in eighth, and Redface Racing by JRT in tenth. The top 25 teams in the standings will advance to this year’s world championship series.

The Porsche Pro Qualifying Series is also in its final week, and after scoring maximum points in each of the past three rounds at Bathurst, Suzuka, and Canadian Tire Motorsport Park, Frederik Rasmussen has the title wrapped up entering this weekend’s races at Sebring.

Maximilian Benecke, Heinrich, and Patrik Holzmann are locked in a tight fight for second in points but are all easily inside the top 20 and in automatic qualifying positions.

TRITON Racing’s Kamil Franczak has moved up to sixth in points while teammate Dawid Nowakowski is in ninth place. MSI’s Alejandro Sánchez in fifteenth and Williams’ Löhner in seventeenth are also set to qualify for the championship series.

While this spring will mean the end of the NEO season, for some of the series’ drivers, it will only be the beginning of more championship competition in the months ahead.