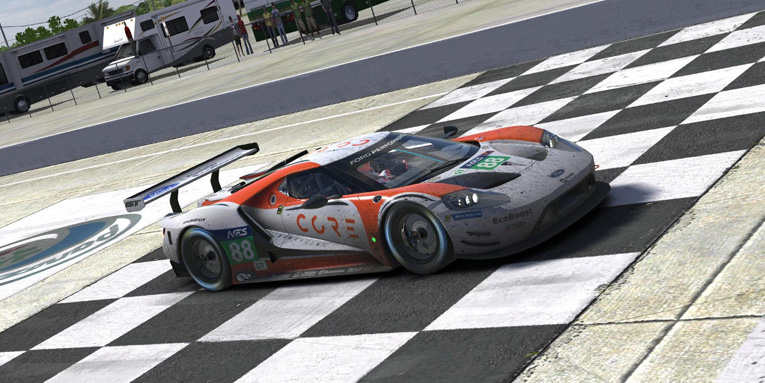 On a weekend in which they topped every pre-race session and in a season where they make up two thirds of the NEO grid, Porsche 911 RSRs were expected to dominate in the season opener at Sebring.

However, when six hours of racing were completed, a pair of talented teammates came out of nowhere to put the little-loved Ford GT atop their class.

Before CoRe SimRacing began their charge to the front of the field, they started exactly mid-pack — twelfth out of 21 GT cars. That was hardly an indictment against their pace, though, as they were just a half-second behind the polesitting Team Eighty-Five Porsche in a qualifying session that saw first and last separated by less than a second.

The first key to victory in the GT class would be a clean start, and for some mid-pack teams, that was easier said than done. An over-eager Bojan Neumann in the Team Eighty-Four Porsche began accelerating while the field was still in pace lap formation headed down the backstretch. He hit the Porsche Basel powered by Sorg eSports #68 car, causing the first contact of the new season, and one of the first penalties issued as well.

CoRe’s Kimmo Suominen was just ahead of that collision, and once the green flag finally waved over the GT field, he was the driver on the move, making up five positions on the first lap.

The start wasn’t as successful for Erick Goldner in the ZENNITH eSport Porsche. After finishing in the top three of both Saturday free practice sessions and qualifying in eighth, contact while racing three-wide through turn 1 sent ZENNITH through the grass and falling toward the back of the running order.

Another contender’s chances took a hit — quite literally — on lap 12 during the first round of P1 lapping. Altus Esports, which qualified second in the hands of Simone Maria Marcenò, were rear-ended by the #28 UI1-Positive SimRacing prototype, launching the rear of their Porsche into the air.

Cruelly, Altus’s race was ended by the same car just 15 laps later in another bit of contact as the prototype exited the pit lane.

The first round of GT pit stops brought little change at the front of the field, although an off-sequence stop for the race’s second Ford GT of Thrustmaster Mivano Racing elevated them to third place once the cycle was complete.

After the stops, Mivano’s Anders Dahl began to fall back on slightly older tires while Suominen remained the Ford on the move, getting past Odox Motorsport Samsung on lap 36 to take over the final podium position.

Seven laps later, the lead changed hands as Lukas Jestädt overdrove Cunningham Corner. TRITON Racing’s Dawid Nowakowski drove through into first — a position his car would hold for the next hour until teammate Piotr Jagodzinski was spun by the World of SimRacing Team P2 car in Le Mans corner.

CoRe’s Janne Kiuru was in striking distance then, putting the Ford out front for the first time all day. From there, they only relinquished the lead during pit stops, and once their gap grew, they led the final 58 laps en route to the class victory.

The other podium positions were also largely locked in for the final two hours of the race distance. TRITON recovered from their spin to solidify second place, and after two other costly off-track shunts for Jestädt in the four laps after his first one, Team Eighty-Five effectively fell out of contention. That elevated SimRC.de, which started in fourth, onto the final step of the podium.

Behind them, a combination on-track incidents and classic GT battles meant positions were far more fluid.

MSI eSports and the Army Racing Team were locked in a close fight for fourth place, but with half an hour to go, contact between them exiting turn 1 sent Army’s Jan Wiechowski sliding and MSI’s Álex Ardisana into the pits to serve a penalty.

Despite running nearly the entire race with rear wing damage courtesy of the lap-1, turn-1 incident with ZENNITH eSports, Army managed to finish in fourth — an impressive opening to their first NEO campaign.

Team Eighty-Five, which was without the services of pre-qualifying ace Gregory Tanson after a race registration issue, finished in fifth ahead of Mivano, putting Fords as the first and last cars on the lead lap after six hours were complete.

The top-finishing Ferrari 488 GTE belonged to SimatoK eSport, which had solid speed from Pierre Lisant and Samuel Roth but also suffered a penalty for avoidable contact. They were followed to the finish by the Ferrari of Redface Racing by MXS Engineering and JRT, which moved from a start of sixteenth up to eighth place. The Porsches of MSI eSports and Torque Freak Racing rounded out the top ten.

The battle for eleventh was a close one late in the race. With 11 laps remaining, Team Eighty-Four passed ZENNITH to take the spot, and one lap later, Goldner was spun by the Wyvern Racing prototype entering Sunset. Juan Segarra for Euphoria Drivex Racing snuck through to take twelfth, and Goldner was left to limp home in thirteenth.

After a spin in the first hour, SRN Motorsports managed to move their Ferrari up to fourteenth at the finish, with Steven McGarvey making a pass on Sorg’s Alex Braeutigam in the final ten laps to take that position.

From nineteenth on the grid, Team Buschfink Racing crept forward three places to sixteenth as the final GT car running at the finish, just missing out on any points.

Behind them were teams that ran into trouble during the race, including a pair of pre-season favorites: the Ferraris of Williams JIM Junior. They both qualified in the final four positions and were eliminated by in-race incidents. For the #97 car, it was a violent barrel roll under the Corvette bridge on lap 91, while the #96 car was knocked out by the P2 class-leading Apex Racing UK car in Sunset Bend.

Torrent Motorsports was once in the running for a top ten, but contact with a P2 car in Tower corner on lap 120 sent them sidelong into the tire barrier, ending their race. Early podium contender Odox Motorsport met a similar fate after contact with a P1 car on the tricky run to Tower. Rounding out the GT field was Altus Esports after their two incidents with a Positive SimRacing P1.

It was a race to forget for those teams, but in CoRe’s camp, it was one to remember. Speed was certainly on their side — when it is not with a couple of Finns behind the wheel? — but they also managed traffic with the combination of elegance, patience, and luck needed in an endurance race.

While some doubted whether a Ford would even make it on the grid at Sebring, CoRe has shown that their late off-season switch wasn’t just a stunt. In the supposed Season of Porsche, it was the blue oval that drew first blood.