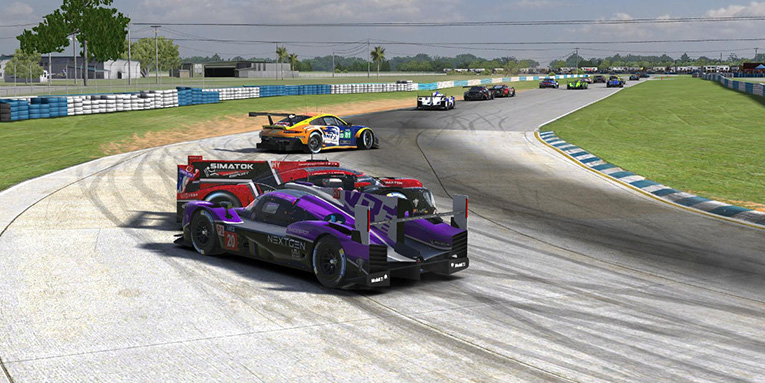 In our first roundtable discussion of the season, we invited drivers and team members from our group of web content contributors to talk about their races from Sebring, how they’re adjusting to new rules and cars, and preview round 2 at Circuit of the Americas.

What was the biggest surprise for you during the Sebring race weekend?

Nick Rowland, #25 Wyvern Racing: Traffic management was trickier than we had thought. Even after doing iRacing Le Mans Series races throughout the week, the quality of the field ramped up, meaning our management required greater tuning.

Marcus Hamilton, #3 Thrustmaster Mivano Racing: There weren’t too many surprises for us. We put a lot of preparation into this race and hopefully it showed! It’s impossible to run a perfect race for six hours, though, and we certainly had a few struggles early on with some hybrid deployment bugs and traffic, but we stayed calm and it paid off.

Philip Eckert, #41 RacingCenter Vib3sports: For us, it was the performance of the cars and drivers overall in our class. We knew about the speed of this league, but experiencing it first-hand was quite impressive.

Wiktor Smolarczyk, #91 TRITON Racing: Maybe not a surprise but we were impressed by the pace at the top of GT class, especially in qualifying. Gaps didn’t exist there!

Sebring saw the return of three classes to the NEO grid. For you and your team, how was traffic in the race?

David Soranzo, #8 SimatoK eSport: It was insane and savage during the first four laps of the race and then clean.

Harley Hamnett, #9 and #98 Torrent Motorsport: We had a tricky time in the GT car with a collision with a P2, which basically ended our hopes for a good result. Other than that, it was a reasonable time for the guys in the P1.

Marcus Hamilton, #3 Thrustmaster Mivano Racing: Generally speaking, lapping GTE traffic was very straightforward. HPDs were a bit more problematic but it was not entirely unexpected — it’s very difficult to be the middle class and I’m sure as the season goes on, people will develop more awareness.

Wiktor Smolarczyk, #91 TRITON Racing: The big difference in cornering speed and acceleration between GT and LMP cars will be always a problem, but it’s one of the most exciting things in multiclass racing. You need to be fast when you’ve got clean track but you also need to be flexible in traffic. This is one of the reasons why we love endurance races.

Only three teams were penalized for track limit violations at Sebring. How did your team approach the new monitoring and penalty system?

David Soranzo, #8 SimatoK eSport: We had serenity regarding track limits. No specific plan.

Nick Rowland, #25 Wyvern Racing: The team adapted accordingly and drove more within its limits. It also encouraged better traffic management to avoid off tracks. Pace within the limits was tested but we just held on.

Marcus Hamilton, #3 Thrustmaster Mivano Racing: If you’re competing for the win, it’s hard to be on the limit and keep under the 20 incident threshold. We actually planned for and expected to get a drive-through, but in the end, we had the fewest off-tracks in P1. Whilst the system turned out okay at Sebring, I think things could be very different at COTA!

Wiktor Smolarczyk, #91 TRITON Racing: This requires wise driving. You should find the balance between being on the limit and keeping your car on the track. It’s always a big challenge but we feel more like real racing drivers thanks to this monitoring system.

Next up is Circuit of the Americas, which tends to be polarizing among drivers. What do you like — or dislike — about the track?

Harley Hamnett, #9 and #98 Torrent Motorsport: I like that it’s a new, modern track with a good mix of turns. I dislike the setup work required in needing to find a good balance without overdoing it and causing an early DNF.

David Soranzo, #8 SimatoK eSport: I really like this track and I will drive this time. COTA is really a complete track with esses, slow and fast corners, and two straightaways. Multiclass racing is sublime there!

Nick Rowland, #25 Wyvern Racing: On our team, two out of three of us are for it. I am not a fan of COTA where both Sai (Andra) and Michel (de Jonge) like it. I think off-tracks will be a greater discussion point at COTA and we could see more penalties.

Marcus Hamilton, #3 Thrustmaster Mivano Racing: COTA is a big hit for us, though none of us have driven it for more than a few laps in the P1s. Lots of preparation work to do but hopefully it should only be simple adjustments from Sebring. Sector 2 is particularly cool with the flowing high-speed esses, but the harshness of the off-track boundaries do cause a lot of frustration.

Wiktor Smolarczyk, #91 TRITON Racing: It’s one of the most difficult modern tracks in the world, with high-speed sections, long straights, and huge braking zones. This circuit has everything you need to produce great racing. But the most challenging thing on this track are blind apexes. We’ll try to learn how to drive fast there in what’s still a new car for us.