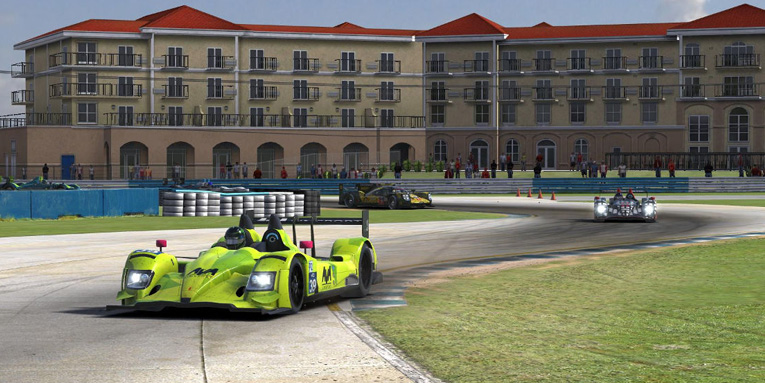 With few returning teams and plenty of newcomers, perhaps no class was more up-for-grabs entering the new NEO Endurance Series season than Prototype 2.

Following an unpredictable pre-qualifying race, the season opener at Sebring did not disappointment, delivering drama for the top contenders from the green flag until the checkered and close battles in the mid-field throughout the race.

The practice sessions that began the weekend offered a glimpse at the competition within the class. Three different teams — AVA Vervatic, IRDK Endurance, and Race Clutch — topped the charts in the three sessions, and a fourth — Apex Racing UK — secured the pole position on Alex Simpson’s quick lap of 1:48.196.

Two tenths behind him in qualifying was Race Clutch’s Aurélien Talmon, and the next four teams were separated by less than a tenth of a second, ensuring a close fight toward the front.

That tight battle for second place continued into the first lap of the race, and as the P2 field funneled into the tight turn 2 — one of the trouble spots teams warned about in our race preview — light contact between Race Clutch’s Yohann Harth and Inertia SimRacing Corsac’s Ossian Puhakka sent both cars into the tire barrier and to the back of the running order.

Race Clutch got the worst of the damage, and even after a trip to pit road for repairs, they retired just 25 laps into the race. It was an especially early exit for one of the pre-season favorites and one of the quickest teams throughout pre-qualifying.

Their misfortune took out a key rival for Apex Racing UK, but the race leaders couldn’t get too far from the new second-place team. By the end of the first stint, Simpson had AVA Vervatic’s Pascal Stix right under his rear wing, and the two drivers had stretched out nearly a straightaway lead over third-place Team Heusinkveld.

Behind them, one P2 team went off-strategy just before hitting GT traffic for the first time. IRDK Endurance made its first pit stop on lap 9, and throughout the first few stints as they went on and off sequence with the rest of the field, they fell as low as sixteenth and as high as third in the running order.

Another driver making an early trip to pit road was Neil M. Andrews from the Luxsim24 MOATF Podcast team. Their HPD was also damaged in turn-2 contact, in this case with the Wyvern Racing P1 car. Stewards issued Andrews a warning for the collision.

It wasn’t his only incident of the race, though. Andrews later found himself at fault for contact with the ZENNITH eSport Porsche and with the Thrustmaster Mivano Racing Ford GT. With the penalty time — and the damage on their HPD — increasing, Andrews parked the car on lap 117, ending the race for the sixth-place qualifiers and DGFX class champions.

As front-runners slowly fell out, several mid-pack teams moved up in the running order. In the second hour of racing, new drivers and teams to NEO such as Iker Estefania for the World of SimRacing Team, Chris D. Wood for Team MAD, and iRacing Today Motorsports with Mark Schindel at the wheel were well inside the top ten.

Torque Freak Racing also made their now-standard climb toward the front of the field, moving from ninth on the grid to a solid third place just after the midway point. Behind them, a close three-way battle for fifth played out, with TNT Racing falling down the order while SRN Motorsports and IRDK Endurance climbed up the pylon.

Up front, the entire race had seen a back-and-forth fight between Apex Racing UK and AVA Vervatic. On lap 71, AVA’s Sven Neumann passed Ferenc Kern for the lead, but with Simpson back in the car for Apex, they were charging toward the top of the order once again.

With less than an hour to go and the final round of pit stops taking place, Apex found themselves in the lead and were trying to open a gap before AVA’s Stix pitted a few laps later. However, Simpson’s attempt to squeeze up the inside of the Williams JIM Junior #96 car under braking for Sunset Bend on lap 167 sent the Ferrari into the wall and the Apex HPD into the pits to serve a penalty.

Apex fell to fourth place after their stop-and-hold but recovered to finish in third. However, a podium was little consolation as they had one of the cars to beat all race. Instead, it was AVA Vervatic quietly taking the race victory in their NEO debut. Likewise, Torque Freak Racing put together a consistent race-long effort to finish in second place.

In fourth was Team Heusinkveld while IRDK Endurance finished fifth, exceeding their best prototype result from last season of seventh. SRN Motorsports was sixth at Sebring, just ahead of race-long foe TNT Racing.

After recording the fastest lap of the race in the final hour, Ossian Puhakka and the Inertia SimRacing Corsac team ended up in eighth. Glenn Key and Jake Burton put in a steady race for UI1-Positive SimRacing, finishing ninth and running as high as sixth in the chaotic early laps.

The World of SimRacing Team also showed signs of speed in the race but were penalized for avoidable contact near the midway point, dropping them to tenth place.

The rest of the finishing order were teams in their first NEO starts. Team MAD, which ended two of the practice sessions in second place, finished in eleventh ahead of iRacing Today Motorsports, RoadBasterds, and Schubert Motorsport. A lap behind them was RacingCenter – Vib3sports.

Outside of the points-paying positions and failing to finish the race In the P2 class were the MOATF Podcast team and Race Clutch. Both teams expected to contend for a top five or better, but that goal will have to wait until COTA.

With so much of the discussion in the P2 class surrounding the issues that top teams like Race Clutch and Apex Racing UK encountered during the race, it can be easy to ignore the performance put in by the race winners from AVA Vervatic. If it was ever possible to overlook a lime green race car, this may be one such occasion.

However, both Pascal Stix and Sven Neumann continued their safe but speedy driving that began in pre-qualifying. With a win in the books and an early edge in the standings, AVA’s competitors will certainly find it tougher to look past them as the season continues.