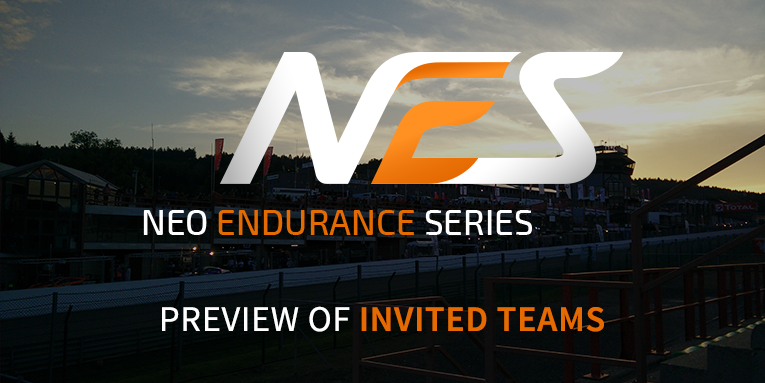 Registrations for the invited teams from last season have ended. The invited teams were a combination of top 8 teams from each of the three classes in NES Season 1 along with the top 3 finishers from Gathering of Tweakers Endurance Series Season 1. In total 27 teams was invited back for Season 2 to which 21 registered.

NEO Endurance is very pleased to see so many teams back, as it can build on the good rivalry between the teams. It is a statement that the battles, hard and fair racing in a well organized environment truly is what sim racing teams strive for. Furthermore it is expected that the registrations for new teams will be bring a pleasant number of new teams to join the epic racing battles in Season 2.

With the registrations for the invited teams closed, we can take a look at the first group of confirmed teams for NES. Note that several teams will be adding more drivers to their rosters before the start of the season.

#1 Coanda Simsport
Winners of the Prototype class in NES Season 1. This will be the prototype team to beat.

#2 Radicals Online
2nd place in NES Season 1. Definitely a contender for taking the championship. Radicals won races at Sebring and Interlagos in Season 1.

#7 Pure Racing Team LMP
Winners of the GES Season 1. “Newcomers” with potential to take the crown in Prototype after a solid performance in GES.

#8 Gathering of Tweakers 1
5th place in NES Season 1. Took the approach of steady running which resulted in 3rd and 4th places in Season 1. Continuing that approach will get them up in the standings.

#15 Friction Racing
4th place in NES Season 1. With victory at Road Atlanta and a 2nd place at COTA, this teams is a contender for the championship. Solid performances is the key.

#24 Team Chimera
7th place in NES Season 1. A 2nd place at Road Atlanta shows what this team can do. Like Friction Racing, solid performance is vital.

#29 Kroenert Motorsport
8th place in NES Season 1. Getting points in all races of Season 1 shows their skills. Improving on the speed can get them further up in the standings.

#33 VergilRacing (Corvette)
Winners in the Season 1 GTC championship. A dominant performance in Season 1 may not continue with a stronger field for Season 2. Thus, VergilRacing still got the upper hand in GT1 and is definitely a contender for the win.

#35 SuperSport Racing (Corvette)
7th place in GTC from driving in just two races + 3 Did Not Starts tells a story of their capabilities but also a need for a more stable roster. The speed is there and a more focused team is back for more blood.

#41 SRN Motorsports (Corvette)
2nd place in GTC. With finishes no lower than 4th place in Season 1, this team knows the DNA of endurance racing. It is expected that SRN Motorsports will continue their stable performance in S2 in the GT1.

#54 Team Chimera (Aston Martin)
6th place in Season 1 with a 2nd place at COTA shows their potential. Focus is on getting the most out of bad races and raising the general performance.

#55 IRDK Endurance (Corvette)
With a stronger field for Season 2 the expectations are to improve on general performance and earning some valuable points in each race. A 2nd place at Interlagos means the team can indeed reach for top 5 with solid driving.

#60 The Dart Frogs (Aston)
3rd place in GTC Season 1. With additions to the roster but a stronger competition, The Dart Frogs may face the same scenario as last season, in which the competition for the vital points is tough. A top 5 should be doable.

#64 Fenix Motorsports (Corvette)
4th place in GT last season including a win at COTA tells something about the strength of this team. The team merged with New World Sim Sport and used one invitation to switch their #64 team to GT1 where they will face a strong competition.

#69 Falcon-GP (Aston Martin)
2nd place in GES Season 1 with a win at Interlagos and 2nd places at Sebring and Road Atlanta. We are sure this team can challenge VergilRacing and it will be interesting to see their fight for top 3.

#73 Fenix Motorsport FGT
After merging with New World Sim Sport this team knows what it takes to win the championship. But GT2 will be an even stronger field this season, so the #73 has to be smart, quick and trouble-free all season to claim victory.

#78 SimRC.de
Additions to the Season 1 5th placed team means they are well prepared for Season 2. An improvement on their bad races and a better general performance can take this team far.

#80 KRT GT Motorsport
The 5th placed GTC team switches to GT2 for Season 2, in which they will drop right into the heat of the battle. They will need to fight hard for vital points, but a 2nd place at Road Atlanta shows their potential.

#82 Virus
Virus has also switched class from GTC (8th place) to GT2. They will need to improve on stability but has shown speed potential several times so a top 8 is within reach.

#94 iRacingDanmark Assault Racing
Season 1 2nd placed team who has the speed and stability to take the crown. With 2 race victories in Season 1 they know how to climb the standings. A top 3 must be a goal for the #94.

#99 Gathering of Tweakers 2
7th place in Season 1. With a 3rd place at Interlagos the team has shown potential in speed. Focus on stability is the key to improve and it will be exciting to see how they fare.

To see the driver rosters of each team go to our Entry list for more details.

More teams will be added after September 27th as we welcome 21 new teams from the pre-qualification session. If you are interested in joining, your team can be one of them! Read this article on how to register your team.