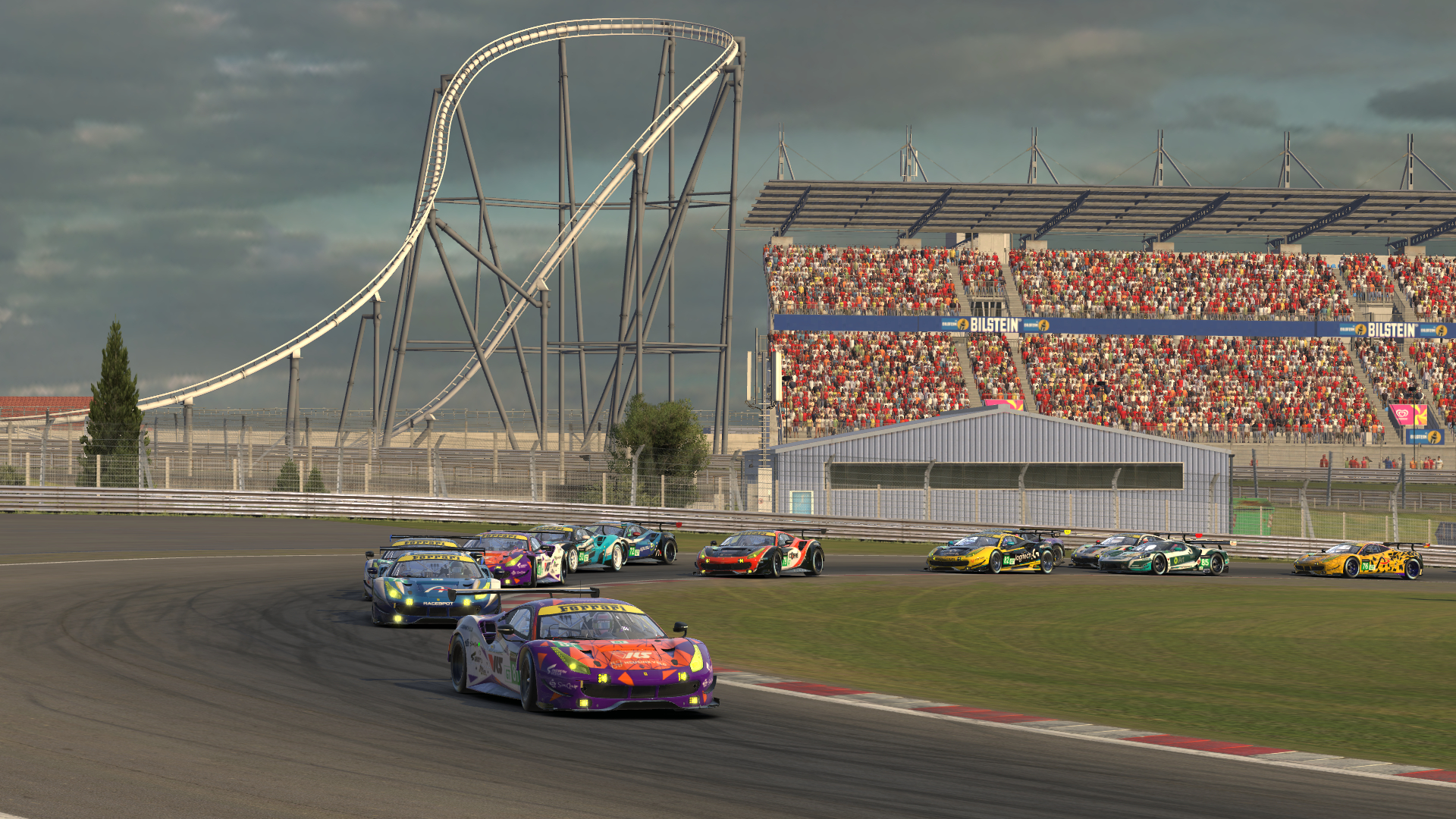 The fourth season of the NEO Endurance Series featured the largest and most competitive GT lineup in series history, so the fights throughout the field — whether for wins, podiums, or a high finish in points — provided season-long action and excitement.

Out of the 31 teams entered in the class, just 12 were able to lock in their spot on the grid for season 5.  Today, we focus on the top GT finishers in the final standings.

Despite a change of machinery from the HPD to the Ferrari 488 GTE this season, Virtual Racing School Coanda Simsport still came away with the championship.  Four consecutive race wins for the trio of Mack Backum, Mitchell deJong, and Joni Takanen put Coanda’s #81 team in a commanding points position entering Le Mans, where they finished on the podium to lock up the title.

A close second to Coanda in three of those race wins was Pure Racing Team’s #71 Ferrari and their three-man lineup of Maximilan Wenig, Patrick Pichler, and Jonas Wallmeier.  Despite a forgettable season opener at Sebring in which they failed to score points, Pure finished the season with four consecutive second-place finishes.  This season, it seemed, the sister team of the prototype champions had to settle for second.

Perennial GT contenders Heusinkveld CORE Motorsports made their mark on season 4, culminating in a third-place overall finish.  But the team’s class win at Le Mans will apparently be their last for a while, as they announced the departure of most of the team’s drivers and a break from sim racing just days after the season ended.

The series champion’s sister car, the #88 Virtual Racing School Coanda Simsport Ferrari, finished fourth in points.  The always-reliable lineup of Klaus Kivekäs, Rens Broekman, and Jeremy Bouteloup brought the car home in second place at Sebring — one spot ahead of their champion teammates — but struggles at the Nürburgring and Spa cost the #88 a chance at a top-three overall finish.

The fastest Ford GT most of the season belonged to MSP Phoenix Racing’s #85 team, which finished fifth in the standings.  Lukas Jestädt and Gregory Tanson led the team to a third-place result at Spa — the only podium for a Ford all season — and top-five finishes in four out of six races.

The best-placed of the two SimRC.de Ferraris was the #77 Crimson-branded car in sixth place in GT points.  Jürgen Frank and Gianni Vecchio each logged nearly 400 racing laps in the car this season, including workman-like efforts for both drivers in a fifth-place finish at Spa that tied their best of the season.

Thrustmaster Mivano Racing successfully got all three of its cars an automatic invite to season 5, as the #69 Ferrari joined its two HPD teammates in the top 12 in class points.  The pairing of Anders Dahl and Luc van Schaik, as well as Le Mans drivers Stefan Muijselaar and Arthur Lehouck, saved the best for last, finishing fourth in the penultimate round at Spa and fifth in the double-points season finale.

The second-highest Ford in the standings belonged to JIM Racing Team, which put their #96 car in eighth position. DNFs in the first two rounds nearly derailed their season, but behind lead driver Mikko Melkkilä, the team recovered for a pair of sixth-place finishes to in the final two events.

From ninth through eleventh in the standings were three teams that must have finished this season wondering what could have been.  Vendaval Sim Racing’s #52 car started out as the team to beat, winning the pole and the race at Sebring.  However, they retired just 9 laps in at Road America after contact from a competitor. A third-place finish at the Nürburgring seemed to reboot their season, but another early exit at Spa marked the end of their run, as like their HPD teammates, they failed to make it to the grid at Le Mans.

Finishing tenth in points, ineX Racing also had the pace and talent to content for podiums all season, but spins, crashes, and penalties cost them positions and points along the way.  An early exit at Le Mans was the final chapter in a disappointing season for the longtime sim racing juggernauts.

The third team in the trio of would-be contenders further down in the standings was CoRe Sim Racing and their #79 Ferrari with Ricardo Castro Ledo, Janne Kiuru, and Thomas Arends trading time behind the wheel.  After four rounds, they had scored points in each race including back-to-back fourth-place finishes, but a DNF at Spa and a DNS at Le Mans doomed any chances for a high points finish.

The 12th and final transfer position in the GT standings went to SRN Motorsports’ #75 team.  Their Ford finished a season-best eighth at Motegi with Steven McGarvey, Jason Gerard, and Karl Modig behind the wheel.  Top tens at Road America and Le Mans also helped them overcome a DNF at the Nürburgring and automatically advance to next season.

Despite a strong seventh-place finish at Le Mans, some early-season struggles cost Torque Freak Racing an invite to season 5.  A crash at Le Mans also kept LOGYKAL Vortex SimRacing out of the top 12 in GT points.  Other notable teams missing the top 12 include GT CleanX Challenge winners Team Heusinkveld and the second entries for SimRC.de, MSP Phoenix Racing, and CoRe SimRacing.

In fact, just one out of the seven teams with multiple GTE entries automatically qualified both for season 5.  That’s more evidence of the incredible competition and top-level driving that it took to succeed in the deepest GT field in NEO history.