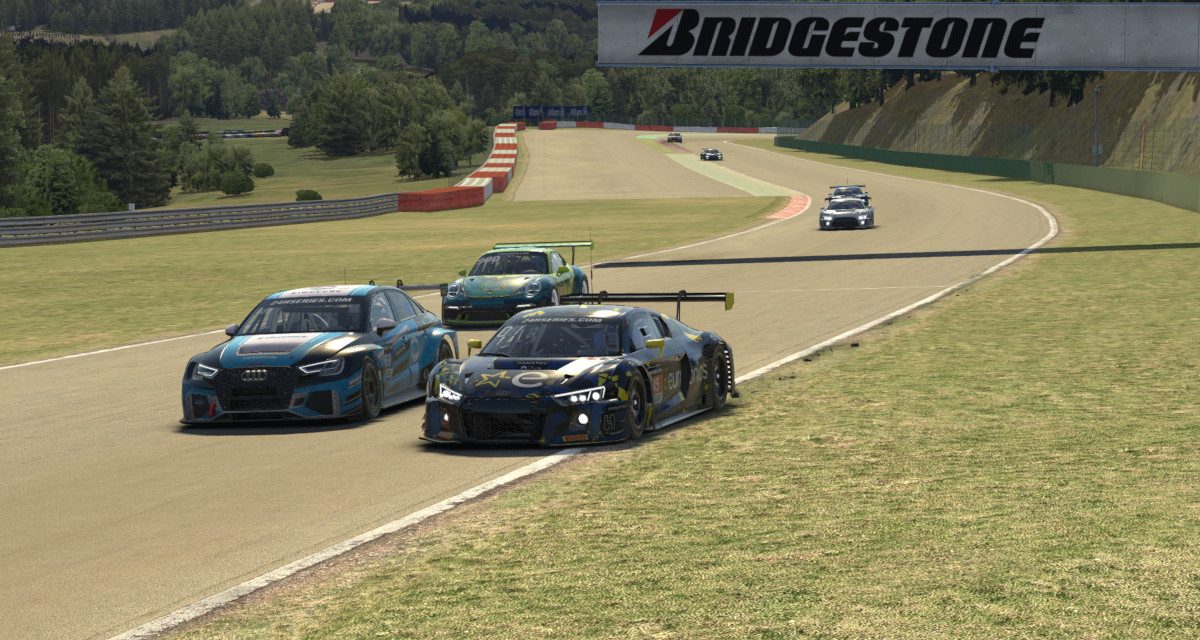 One year ago, the drivers from Biela Racing Team EURONICS, then on Team #85, swept pre-qualifying in the GTE class, but couldn’t find their way back to the front of the field during the season.

Last month, they again paced pre-qualifying — this time in the GT3 class — but when the new 24H SERIES ESPORTS season started last Sunday with the 6H SPA-FRANCORCHAMPS, it took them just one hour to get to the lead and earn their first NEO win since joining Frank Biela’s official esports team earlier this year.

Six hours before they celebrated the win, they and many other GT3 entrants were lucky to even make it past the start. The slow roll toward the classic start/finish line bottled up the field, and the Biela #45 car was briefly three-wide on the run to Eau Rouge.

While the top five settled into a single-file line for the first turn, a side-by-side battle behind them became the first big crash of the season just seconds after the green flag.

Defending P1 champion Tommaso Carlà for Mivano Simracing Team moved over too soon while trying to fall in behind SRC Squadra Corse, sending both Mercedes AMGs spinning sideways while the rest of the field piled in.

A number of expected contenders and top-ten starters including Logitech G Altus Esports, Williams JIM Esports, and Team Heusinkveld were caught in the crash, sending them back to the pits for repairs and ending their hopes for a strong Spa result.

While the field was frayed by the incident, it didn’t diminish the fight up front. From fourth on the grid, MSI’s Alvaro Ramiro rocketed past polesitter Kay Kaschube from Williams Esports on the opening lap, and the two were nearly inseparable — at times literally, as they banged doors down the Kemmel straight — during the first hour of action.

Their back-and-forth battle brought a new player into the mix. Biela’s Sven Haase moved from third to second during the first round of pit stops, and after carving through traffic better than Kaschube, he took the lead on lap 30.

While Biela opened a three-second gap, Williams fell back into the clutches of MSI, and the two Audi teams traded second position several more times while their starting drivers were still in the car.

Two-way battles were the theme of the second stint in the GT3 field. Filip Mitrevski from the Privateers and Marcin Skrzypczak from DV1 TRITON Racing dueled for fourth place. A pair of teams on the same alternate pit strategy — Sorg Rennsport eSports and Huber Racing E-Sports — fought for seventh. And while Biela’s #45 car held the lead, their sister team in the #46 watched Williams JIM’s damaged-but-drivable #21 Audi make a pass for ninth.

The second cycle of pit stops saw wholesale driver changes. Among them, Lukas Jestädt took over for Haase in the #45 while Dominik Staib manned Williams’ car and kept the gap to the lead under 5 seconds, all while distancing himself from MSI’s Julian Rodriguez Moreno.

It was a gap Williams needed, as during their third pit stop, they served a 30-second penalty for contact with a TCR car. After the stop, they held second place but were more than half a minute behind the leader.

Two of the earlier battles also ended with penalties to TRITON after contact with the Privateers and to Sorg after an unsafe rejoin ahead of Huber — their counterpart running the fuel tank to the end on each of their pit stops instead of pitting on the one-hour mark like the rest of the front-runners.

Those penalties helped open up the gaps between cars. When Haase got back in the race-leading Biela car with under two hours to go, he remained 30 seconds ahead of Kaschube, more than a minute up over TRITON and the Privateers, and more than half a lap ahead of new fifth-place runner Ricardo Silva from S2V eSports.

After starting eleventh, Silva crept past the lap-one carnage ahead and began a slow rise through the field, aided by a penalty to MSI’s Ramiro, who cut too much of the track exiting the pits with two hours to go.

The final stages of the race were cleaner for the top class, aside from a second penalty to Kascuhbe for more GT3-on-TCR contact. However, his gap over third place meant his runner-up position was safe after serving the stop-and-hold during the final pit stop.

That did give Haase and Biela Racing Team EURONICS a safe lead of nearly a minute, and they had no trouble making it to the checkered flag first. For Jestädt, it was his first NEO win since the season-three Spa race in February 2017, while it’s Haase’s first ever trip to victory lane in his first series start.

Kaschube and Williams crossed the line in second, 56 seconds behind — less than the time they lost from their two penalties.

The third-place battle closed to within two seconds at the finish, with Jan Wiechowski and TRITON holding off Mitrevski for the final podium spot. For TRITON, it was their best finish since a second-place GTE result early last season at COTA.

A tight fifth-place battle fell in S2V’s favor when MSI spun at Rivage with seven laps to go. Meanwhile, Huber’s strategy paid off when they made a later final pit stop for fuel only, moving them from ninth to seventh. For driver Anton Steiner and the team — the last to make the GT3 field in pre-qualifying — it was a strong and shrewd showing to start the season.

Biela’s #46 team came home in eighth while Sorg and its four-driver lineup finished ninth. For tenth-place Virtual Motorsport, the race was almost unblemished, aside from some unlucky contact with a spinning Porsche on the first lap of Michael Storm’s first stint.

The remaining teams to reach the finish were all on damage control after early incidents. Williams JIM and Team RSO finished one lap down in eleventh and twelfth, while Team Heusinkveld was thirteenth, Altus was fourteenth, and Leo Racing Team was fifteenth, with their race derailed by a solo spin at Raidillon in the first hour.

Another team on debut, Phoenix Racing eSport, failed to finish, as did SRC Squadra Corse and Mivano.

While GT3s might have been expected to take the bulk of the penalties, they were tagged for only six of the 22 penalties, just two of which were for multi-class incidents.

Perhaps their downforce and agility under braking are a blessing rather than a curse. And no team exemplified that more than Biela. At times clipping the grass while executing passes, Haase and Jestädt used every bit of the road on their way to the win.

While the track may have limits, it seems the Biela team’s potential may not after their strong start to the season at Spa.