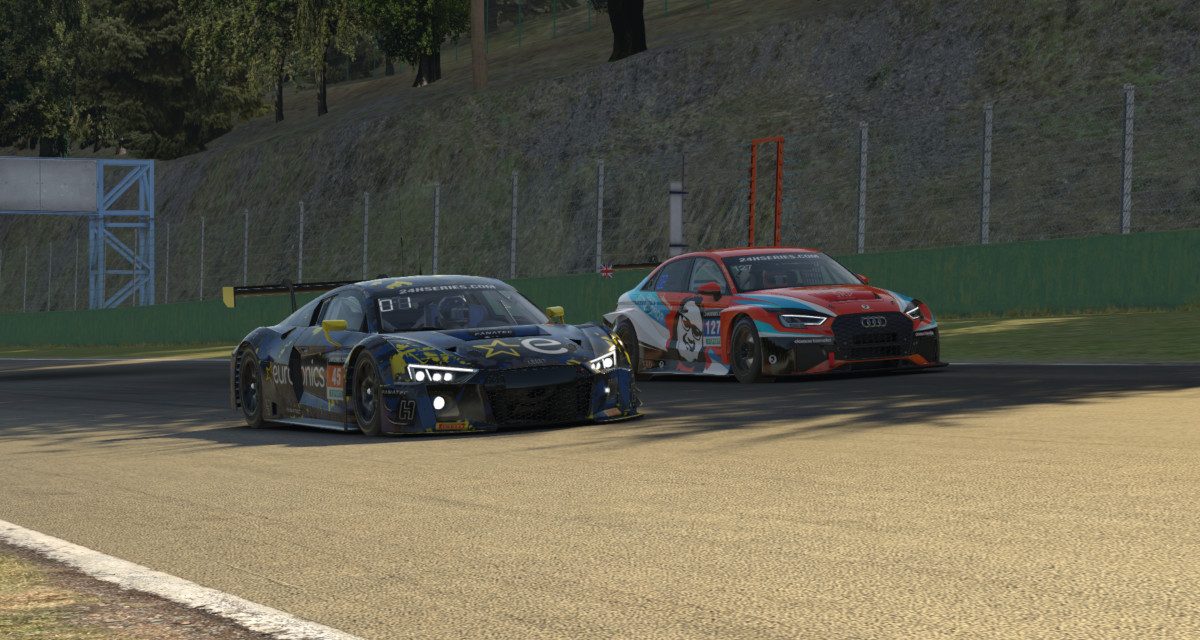 The 24H SERIES ESPORTS championship, and NEO’s sixth season, opened with a bang and finished with endurance racing legend Frank Biela’s esports team visiting GT3 victory lane, along with two of the series’ returning veterans in the 991 and TCR classes, in Sunday’s 6H SPA-FRANCORCHAMPS.

The race got off to a ragged start, with a crash near the front of the GT3 field entering Eau Rouge on lap 1. The incident was triggered by contact between Mivano Simracing Team and SRC Squadra Corse, eliminating those contenders while damaging a handful of others.

Williams Esports and MSI eSports led the way after the crash, but while they swapped the top spot, Biela Racing Team EURONICS’ #45 Audi R8 caught them and took over the lead after the first round of pit stops.

From there, Biela’s Sven Haase and Lukas Jestädt drove a flawless race and pulled away from the field to earn the season-opening win.

Despite two 30-second stop-and-hold penalties for avoidable contact with TCRs, Williams managed to hold onto second place, while DV1 TRITON Racing climbed from sixth on the grid to take the final podium position.

In the 991 class, the story of the race was domination by MSI eSports, including a blistering pole-sitting run by Alejandro Sánchez. However, a scary moment with just over an hour remaining nearly cost them their one-minute lead and a shot at the win.

As Marc Pérez looked to pass a TCR outside of Blanchimont, the door closed, forcing his #975 Porsche 911 GT3 Cup car onto the grass and into the outside tire barrier.

A crumpled fender aside, MSI made it through unscathed and held on to score their first NEO victory. DV1 TRITON Racing led early after a fuel-only first pit stop, but they eventually settled into second, while Burst Esport finished third.

NEO’s newest class offered some of the most exciting racing, with draft packs of Audi RS 3 LMS TCRs all around the Spa circuit. Traffic, tire wear, and pit strategy largely split up the field by the midway point, but there was still plenty of drama in the closing stages.

The class leader from CraigSetupShop was penalized with two hours to go for moving over under braking on a 991 car, handing the lead to their race-long drafting partner from CoRe SimRacing.

But a later and shorter final pit stop put the #127 car back into the lead, and Jack Sedgwick ran his fastest laps of the race in the final stint to win for CraigSetupShop alongside teammate Simeon Lynch.

CoRe was 25 seconds behind at the end to take second while Vendaval Simracing was a further eight seconds back in third.

While there were fears of multi-class carnage entering the race and a number of penalties were issued for avoidable contact or unjustifiable risk, attrition was low, with only four cars failing to finish.

Stay tuned to neo-endurance.com in the coming weeks for additional coverage from Spa, including team and driver insights and class-by-class race recaps.