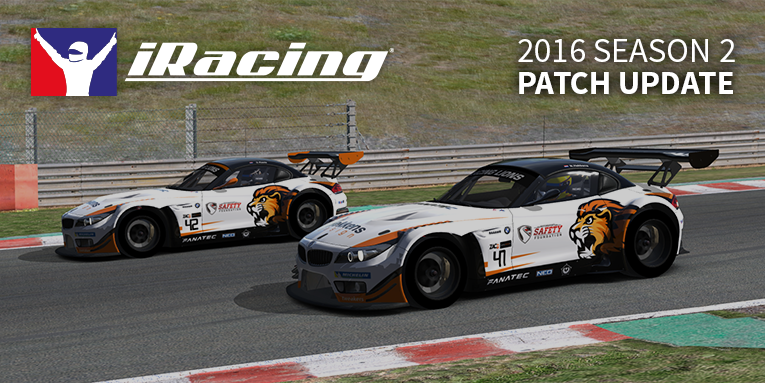 Web
– Functionality of the Race Panel has been restored when the user is on the Series Stats page.
– An issue preventing racer counts from populating correctly, as well as race position selection from displaying, has been fixed.
– Fixed an issue with Heat Builder that was causing Position Builder and Racer Count to throw an error.
– Added functionality for scrolling while dragging racers around the Race Setup Grid.

Netcode
– Fixed an issue that might have caused the loss of voice chat and/or dynamic track updates from the server when using the “1Mbit/sec or higher” bandwidth selection in sessions with 58 or more cars.

Simulator
– Enhanced the Crash Dumper to log additional info when a freeze is detected.
– Fixed an issue with altered thread priorities on Windows 10 systems.

DirectX 11
– Fixed an issue where the drop shadow of a car was sometimes rendered using the texture of a different car.

– Fixed an issue where random flickers of geometry could be rendered with some particles.

– Fixed some large pauses that would occur while loading due to shadow volumes.

– The Alt+Tab functionality of the Sim has been adjusted due to several issues that could occur, such as crashing during exiting or notifications causing the screen to go completely black. The new changes work as follows:

Controls
– Fixed a pedal calibration bug with certain custom pedal boards.
– Fixed a bug that prevented users from using the S, V, and ; keys when naming a new radio channel.

Dallara DW12
– Fixed a bug so that brake pressure bias value is now displayed in the Garage and F8 Black Box instead of the brake bar bias value. This fix has no effect on existing car setups, it only corrects the displayed value for brake bias.

Formula Renault 2.0
– Fixed a bug so that brake pressure bias value is now displayed in the Garage and F8 Black Box instead of the brake bar bias value. This fix has no effect on existing car setups, it only corrects the displayed value for brake bias.

Mazda MX-5 Cup
– The maximum allowable suspension damping has been reduced to ensure the dampers are numerically stable while driving.

McLaren MP4-30
– Fixed an issue where the Energy Recovery System (ERS) was unable to toggle from Adaptive Deployment Mode back to Fixed Deployment Mode.