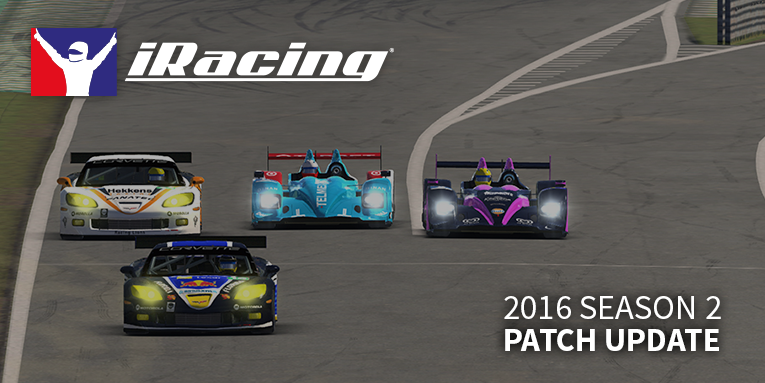 After a relative successful build deployment last week, iRacing deployed a first patch for the season. Originally the update was planned for Monday 14th, but delayed multiple times due to problems that have been found in final testing.

The patch is to fix some issues that have occurred in the latest build and improve the simulation overall. The GT3 cars got another balance of perfomance, to balance the new Audi and Mercedes with the current GT3 cars. The Ford GT now also has flashing headlights and a lot of “terrain art updates” for a lot of tracks.
Below you can read the release notes of the patch:

Several quality improvements have been made with this patch to enhance your experience on iRacing, including frame rate improvements and various bug fixes. We hope this build addresses many of the issues that you have helped us find.

That said, there is still a known issue that a small number of our testers have with this patch. The iRacing application can freeze when the Particle Detail setting is at the “Medium” or “High” value. Therefore, the Sim will automatically set your Particle Detail setting to the “Low” value when it first launches. Feel free to adjust this if you wish, as these freezes are fairly rare and seem to affect only a small percentage of systems. If you do increase the Particle Detail setting and then experience application freezes, it may be due to this setting. Please adjust your Particle Detail setting back to the “Low” value and contact Customer Support for advice. Also, there appears to be some correlation between these freezes and several older versions of NVIDIA graphics card device drivers. We are actively investigating this issue and hope to resolve it shortly.

Thank you for your patience with this 2016 Season 2 Patch 1 build deployment. We hope you notice some improvements and have fun out on the track!

Web
– Fixed an issue that was causing the “Popular Races & Practices” page to fail to load correctly for some users.

Paint Kit
– Inside Sim Racing sponsor images have been updated.

Simulation
– Fixed several issues with thread affinity and thread priorities that could cause performance problems and stuttering.

– Removed the setting “[Task] num_processors_to_use” parameter from the “core.ini” file, since altering this could adversely affect the Simulation’s performance.

Netcode
– Prevent the Sim from dynamically probing your network connection to see how large a packet it can send.

– Changed the default maximum network packet size to ensure that Connection Type selections on the Account->My Account->Preferences page on the web site up to “512K or faster” require only one packet. The two higher selections (768K and 1Mbit) will require more than one packet.

Sessions
– Fixed an issue that was causing incident points during a Qualifying session embedded within a Race event from counting towards your SR.

Tires
– Fixed a bug where a tire could stop interacting with the ground after being in the air during a pit stop.

Rendering
– Fixed a bug where the Sim could crash transitioning from a practice server to a race server.

– Added the ability for the Sim to detect certain application freezes and generate a crash log file. These files can help our developers track down the causes for such behaviors and try to get them fixed. This logging ability is optional, and is disabled by default, however you can enable it if you are experiencing application freezes by adjusting the “maxAllowedHangTimeSecondsBG” and “maxAllowedHangTimeSecondsFG” options in your “app.ini” file to a value of “=50”. This means that if your Sim freezes, a snapshot of your program will be generated after about 1 minute, and output into a .log file which you can then send to Customer Service and our developers for review. However, please note that we do not advise enabling this detection system unless necessary to help debug an issue.

DirectX 9
– Fixed an issue where windshield reflections appeared dimmer than in DirectX 11.

DirectX 11
– Fixed a crash bug that happened when exiting the simulator with certain graphics settings, such as class 1 settings with Render Dynamic Tires disabled.

– Fixed an issue where skies were often not oriented correctly. For instance, the sun was often located at some random and incorrect position.

– Fixed the odd bluish shadow patches that could appear on road surfaces and curbs with low sun angles such as occur during the morning and afternoon. The issue was noticed at Lime Rock Park and Virginia International Raceway.

– Fixed an issue where Track Surface Decals could tile incorrectly, resulting in odd patterns of lines seen on the track at Southern National Motorsports Park, and some other areas.

– Fixed an issue where some tire rims were rendering white. Generally, these vehicles were not yet updated to be using the PBR Shader.

– Fixed an issue where chrome could render too bright on some of the older car models.

– The filter that removes resolutions smaller than the desktop dimensions in the Autoconfig application has been removed.

– The simulator now attempts to keep activation, and not minimize, when losing window activation, unless an Alt+Tab function was recently processed. This may help prevent “pop-up windows” and notifications from minimizing the simulator.

PopcornFX
– As a precaution against a known issue with application freezes that may occur when Particle Detail is set to the “Medium” or “High” value, the Sim will reset your Particle Detail setting to the “Low” value the first time it launches.

– An issue with black particle debris effects on tires has been fixed.

Dynamic Tire Debris Accumulation
– Fixed an issue where tires would appear black when the Particle Detail option was set to the “Low” setting.

– This system will be disabled when the “Shader Quality” is set to “Medium” or lower.

Black Boxes
– Setup changes that are applied during a pit stop (like tire pressures) are no longer kept when the Sim advances from one session to another. Immediate in-cockpit adjustments (like brake bias or traction control setting) are still kept across a session transition.

Weather
– Fixed an issue where one of the partly cloudy sky lighting files was configured with the incorrect cubemap.

– Temperatures in sessions using Dynamic Weather will now remain within the same limits that can be selected in offline Testing and Hosted sessions.

EasyAntiCheat
– Should a Package Error 73 occur, the specific EasyAntiCheat message that caused the error will be appended to the sim_launch.txt log file in your My Documents\iRacing\logs directory, for future reference.

Video Capture
– Video Capture will now be defaulted to disabled.
– Video Capture can now be enabled and disabled via a Settings option.
– Users are now able to select “Fullscreen” when capturing video.
– A new video capture library has been added to fix an issue with DX11 and XSplit.

Audi R8 LMS GT3
– 2016 S2 GT3 BOP Change: Aero drag has been slightly reduced.
– Rear damping has been added to improve performance over curbs and with sudden changes in track camber or elevation.

Ford GT
– Fixed an issue with the brake lights in DirectX 11.
– This vehicle is now capable of flashing its headlights.

Ford GT GT3
– Fixed a bug where the traction control switch was unable to turn off and the slip limits were incorrectly defined, compromising system function.

Formula Renault 2.0
– Setups have been updated.

– Fixed an issue with the animation of the suspension.

– Dampers have been adjusted; dampers for all setups prior to this build will be set to 0. Members who already own the car should either adjust their damper settings to feel/speed or restart setups based on these new iRacing baselines included in this build.

– The level-of-detail distance for the suspension system has been adjusted.

– Opponent cars should no longer bounce when they enter the world.

– Controls option for fuel mixture settings has been removed.

McLaren MP4-30
– Efficiency of P2P/OT of the Energy Recovery System (ERS) has been reduced significantly.
– Aero drag has been reduced when the Drag Reduction System (DRS) is engaged to improve the ability to overtake.

Mercedes-AMG GT3
– 2016 S2 GT3 BOP Change: Aero drag has been slightly reduced.
– Internal windshield of the external model will no longer appear green.
– Fixed a bug where the traction control switch was unable to turn off.
– Fixed some level-of-detail textures.

– Gear shift, transmission, and engine sounds have been updated for cockpit and onboard/chase views.

Ruf RT 12R Track
– Illuminated Lumirank digits have been removed while in cockpit mode.
– Gear shift, transmission, and engine sounds have been updated for cockpit and onboard/chase views.

Phoenix International Raceway
– Tweaked the shape of a backstretch wall where a Turn 2 safer barrier ends.