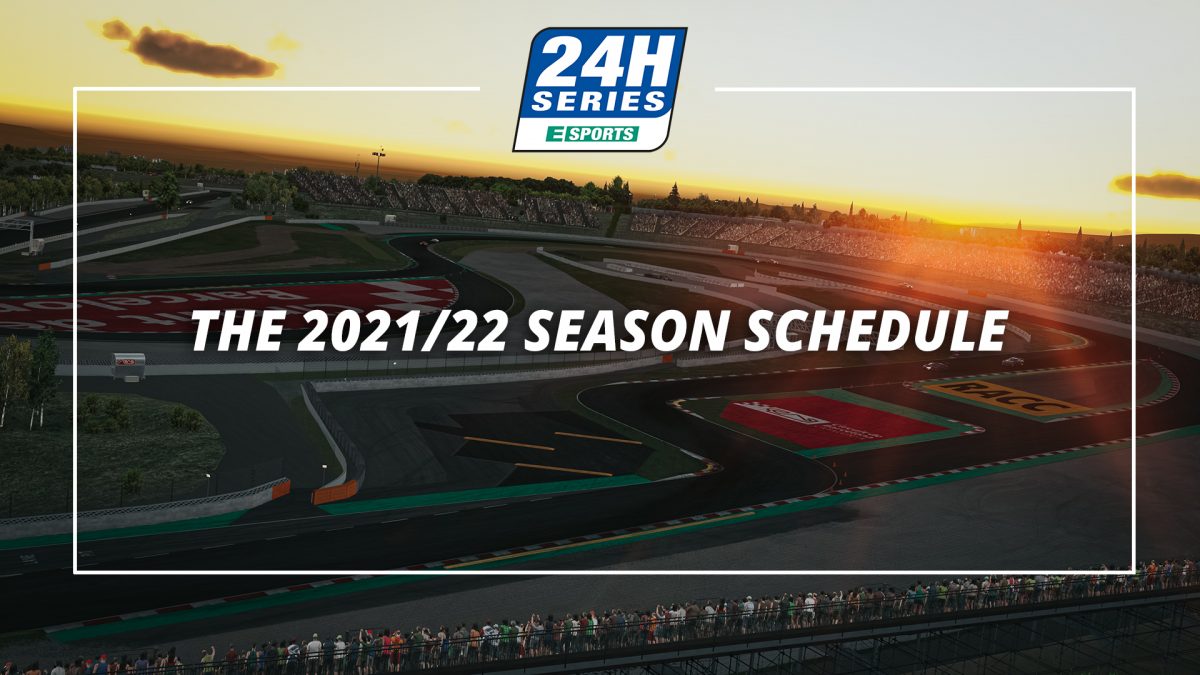 The next season of the 24H SERIES ESPORTS sees a mostly similar schedule to last season. Two long-standing tracks have been replaced with recent additions to the iRacing service, while the other four remain constant. Timing-wise there are no major changes, with the first two races once again held before the holiday season after which a further four races will complete the season. The race distances remain the same as last season: 5 6-hour races and a 12-hour finale.

Pre-Qualifying: Donington Park, 18 & 19 September 2021
Pre-Qualifying will once again be held at Donington Park over the course of two days. Across four sessions aspiring teams will have the chance to put in their best 10-lap stints in an attempt to make the grid for the 2021/2022 season.

Round 1: 6H Hockenheim, 17 October 2021
The season will kick off proper with a new track to iRacing and the 24H SERIES ESPORTS. In June, Vendaval Simracing and Williams Esports had a thriller of a finish in the Creventic Endurance Series at the Hockenheimring with a pass for the lead in the last minutes of the race. That was a 12-hour race, who knows how close the field will be in a race only 6 hours long?

Round 2: 6H Sebring, 21 November 2021
The second round will take us to the States and to the bumps of Sebring. This year will see the first ever 24H of Sebring contested by the 24H SERIES teams, on the same weekend as the ESPORTS teams will also compete here. That will mean 30 hours of racing at the legendary airfield turned racetrack, where teams must always remember to #respectthebumps!

Round 3: 6H Red Bull Ring, 16 January 2022
After a well-earned winter break, the teams will head to the second of the two new additions to the calendar: the Red Bull Ring. Racing through the Styrian mountains circulating the massive Red Bull sculpture in the centre of the track will make for some great shots, while the track is known to deliver racing of a similar quality. The teams’ notebooks will still be empty when it comes to endurance racing around the Red Bull Ring, so keep an eye out for an unexpected winner at this race.

Round 4: 6H Monza, 13 February 2022
The Temple of Speed hosts the fourth round of the championship, and will no doubt be the race where the most distance will be covered – excluding the finale of course. The long straights lend themselves to slipstream passing while the tight chicanes mean cars and drivers alike will have to be good on the brakes. Last season we saw different strategies being selected by the top contenders, fingers crossed we’ll see another enticing fight this season!

Round 5: 6H Barcelona, 13 March 2022
The penultimate round of the championship is once again held at the Circuit de Barcelona Catalunya, where last season Biela Racing Team EURONICS completed a hattrick of wins to solidify their grasp of the title. Last season the race ran into sunset and darkness, which caused plenty of excitement as the changing conditions meant that the performance balance in the field shifted throughout the race.

Round 6: 12H Spa, 17 April 2022
For the third year in a row the season will be capped off with a 12H race, and like last season Spa will play host to the finale. The Ardennes hills and forests provide a great landscape through which the track winds itself, and for good reason the track is named by many a driver as their favourite track. No doubt many will be looking forward all through the season to getting to drive this track as fast as they can for 12 hours straight.