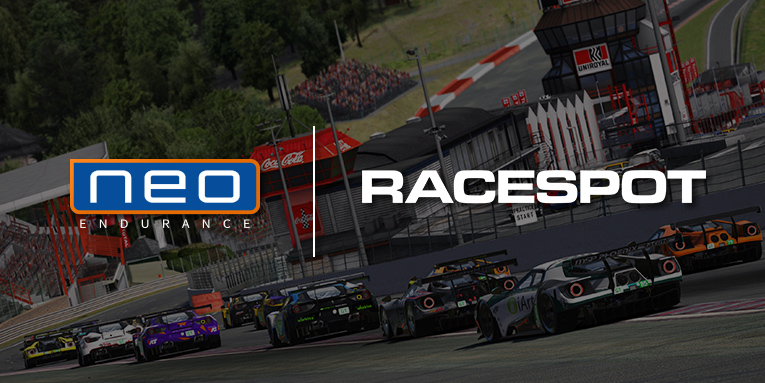 While the cars, tracks, and teams in the NEO Endurance Series have all seen shakeups over the years, one constant has been the broadcaster. In fact, it’s a partnership that pre-dates the NES in its current form, as well as the broadcaster with its current name.

“We’ve been working with NEO since… well, before RaceSpot was RaceSpot!” said Wil Vincent, head of commentary for RaceSpot TV.

Indeed, Vincent and his fellow commentators have provided live coverage of NEO dating back to the spring of 2013, when the organization then called Glacier TV broadcasted the first season of NEO competition, which was made up of a series of solo-driver sprint races.

That partnership is set to reach its six-year anniversary early next year, as the two groups have agreed to an extension that will see RaceSpot cover the fifth season of the NEO Endurance Series beginning this fall.

For both parties, it was an easy agreement to come to since the partnership has proven mutually beneficial.

“We are happy to extend our partnership with RaceSpot,” said Niel Hekkens, NEO’s co-founder and series director. “They do an amazing job in broadcasting our events, and we work closely with them to improve the streams every year.”

“I think it’s great to work with an organization who are so passionate about what they do,” added Vincent. “For us, it means when we go live one Sunday a month, we know that our viewers are going to get top-quality racing in a series that is impeccably run.”

A lot has changed both with iRacing’s content and with sim racing broadcasting since 2013, and Vincent said he’s pleased with the innovations that RaceSpot and NEO have made together.

“Both our product and NEO’s have evolved, and I think we’re proud that we continue to try out new things. Some work, others don’t, but we both see the value in pushing the boundaries of what can be achieved in a sim racing broadcast. I think we would all be bored if it stayed the same!”

A new innovation is on the way for next season, as for the first time, RaceSpot will provide live coverage of NEO’s pre-race qualifying sessions, which will shift to Sundays before the start of each race except for the season-ending 24 Hours of Le Mans.

Hekkens said several factors influenced the change, including respecting the wishes of many teams and drivers in the post-season survey, avoiding conflicts with Saturday races during the endurance season, and automating the race day procedures to have qualifying times automatically set the starting grid. This means the stress- and sometimes penalty-inducing target times are a thing of the past for NEO’s six-hour races.

Once that decision was made, Hekkens said he approached RaceSpot about showing live coverage of the open qualifying sessions, which will see each class have 20 minutes on-track with a 5- to 10-minute break between classes.

“After we decided to move qualifying to Sunday, I had the idea to broadcast the qualifying session as well. I’ve always had this idea in mind, but didn’t really make sense before,” said Hekkens.

“Now we can create some kind of pre-race show, with qualifying, in order to build up the excitement and story toward the start of the race.”

Vincent echoed those thoughts and said the qualifying broadcasts will be focused on one thing.

“Storylines, storylines, storylines. You can use the season so far and races previously contested to get a feel for things that might come, then see if they do! It’s important also to understand the importance of qualifying from track to track, and those drivers who either pull something out, or ‘choke’, to use the technical term.”

In that sense, Vincent said RaceSpot’s coverage of NEO qualifying will be of a greater “level and extent” than with other races that use attached qualifying sessions, such as the World Championship Series events.

The addition of LMP1s as a third class for NEO this season will also add an extra dimension to the broadcasts, and the RaceSpot crew has been busy behind the scenes to become acquainted with the new cars and their technological wizardry.

“What we love about our crew is that almost all of them drive a variety of cars on iRacing, and all are big motorsports fans,” said Vincent. “Many of us have driven the LMP1 cars, and I personally watched 18 hours of Le Mans this year, as well as going to WEC races (with Niel!).

“I’ll be frank here — I don’t want non-endurance people in an endurance booth. If you can’t understand the cars, how they work, and how multi-class racing works, there’s no point being there.

“The same goes for actual commentating, too. Endurance racing commentary is a fine art. It’s balancing the race with history, facts, information, interviews, and fun.”

Vincent, who said one of his most special accomplishments was broadcasting NEO’s first 24-hour race in 2017, promised that the addition of an extra class won’t mean the broadcasts focus too heavily on the new prototypes.

In fact, past experience, especially in covering last season’s hyper-competitive GT class, showed Vincent and his team that “it’s often not the prototype class that has the best racing”. But teams and drivers in all classes can rest assured that if they’re in a close battle, the broadcasters will try to find them.

“We make use of a number of packages through ATVO and our live timing to identify changing gaps, and we do try to show something exciting if there is a battle going on. We won’t catch them all because we are human, but our directors do amazing work trying to get as much action as possible. We try and have one person ‘focus’ on battles in each class as well.”

With around 64 hours of live coverage expected — roughly 10 hours more than in season 4 — including twice-around-the-clock coverage of Le Mans for the third consecutive season, the RaceSpot team should have plenty of time to discuss all aspects of the series.

Still, Vincent said one of their biggest challenges this season would be “getting fair airtime to all”.

“That, and ensuring our graphics remain uncluttered,” he said. “We are design geeks, so don’t expect too much information on screen.”

A New Place to Tune In

All of NEO’s races along with RaceSpot’s other broadcasted series will air on the newly announced iRacing eSports Network. Vincent encouraged teams and drivers to get involved now by subscribing to that YouTube channel and sharing the news with their followers in anticipation of the upcoming season.

“We need to ensure as many people get their eyes on the broadcasts as possible. I believe that teams and drivers have as much a responsibility for this as us broadcasters or NEO as a series promotor. I hate the ‘Like, Share, and Subscribe’ tat, but it’s true, really!”

Without tipping their hands, both Vincent and Hekkens said they had some other new ideas for ways to spice up the race broadcasts, but viewers will have to wait until the start of the season to see them.

And that’s not the only thing that Vincent was tight-lipped about. When asked about any bold predictions, such as which team or manufacturer might top each class, he joked that he’d leave that job to some of his fellow commentators.

“I famously never make predictions. Where are Jake Sparey and Randy Chenowth when you need them, eh?”