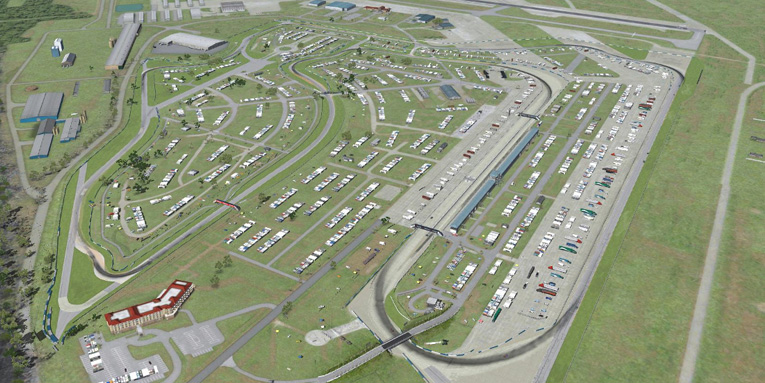 As it has in each of the past four years, the virtual Sebring International Raceway is set to host yet another NEO Endurance Series season opener this weekend. In this preview of the 6 Hours of Sebring, we’ll share some insight about the track and the race, including thoughts from the teams themselves.

The Sebring race has seen plenty of parity, with 10 different teams earning the 11 class victories that have been up for grabs in the four years of the event. The only repeat winner is Pure Racing Team, which won the GTS class in season three and last season’s race in the prototype class.

There are a few teams and drivers in the field this year who have tasted victory at Sebring. Most recently, Team Chimera’s Ben Tusting and Jack Keithley earned the last of their three NEO wins to date at Sebring in season three. SimRC.de also won that season’s GT class, although none of the drivers from that team are entered this time around.

Thrustmaster Mivano Racing has two drivers with Sebring wins to their name. Tommaso Carlà (#3 P1 entry) won the GT1 class in season two and Anders Dahl (#69 GT entry) won driving the CSpec in the first ever NEO Endurance Series event in season one.

Finally, Joris Thielen — now with Team Buschfink Racing — won in the GT2 class as part of Fenix Motorsports in season two, when the Sebring event was an eight-hour race.

One team worth watching that has found past success at Sebring is Odox Motorsport. Driving the Audi R8 GT3 in season three, their lineup of Xavi Estella, Marc Perez, Andreu Rodriguez, and Juan Jose Sanchez placed second in class. Three of those drivers are back this season in the #73 Porsche, so perhaps their past podium-earning experience will pay off.

If you’re looking to the real world for hints on which GT manufacturer to watch, those results strongly favor the Porsche. In this year’s 12 Hours of Sebring, the Porsche 911 RSR driven by Patrick Pilet, Nick Tandy, and Frédéric Makowiecki won the GTLM class, while their teammates in the #912 car were third. The top-placed Ford GT finished fourth in class and the best Ferrari 488 GTE was fifth.

With its frequency as a host of NEO competition and the annual 12-hour event, the Sebring International Raceway should be a familiar venue to all drivers and teams.

Pieced together on the runways and taxiways of an old US Army training base, the track is in many ways a throwback, from the teeth-rattling bumps of its decades-old pavement to the absence of modern gravel traps and runoff to its largely unchanged layout, which was last updated in 1999 when the hairpin and Sunset Bend were modified.

A lap around Sebring begins with the fast, tricky, and especially bumpy turn 1, which funnels the field from the wide frontstretch into the narrower infield from corners 2 through 5. P1 teams agree that this is the most challenging part of the entire lap.

“The right apex for turn 1 and the esses right after will make or break the lap for us,” noted a representative from UI1-Positive SimRacing.

“You really need to thread the needle here,” added Marcus Hamilton from Thrustmaster Mivano Racing. “Go off line by an inch and it’s extremely difficult to recover without losing a lot of time.”

From there, a curving straightaway leads into the heaviest braking zone on the track for the tight hairpin. This is always an important section, both for passing and for overall pace.

“Braking into the hairpin is crucial,” said Ossian Puhakka from the Inertia SimRacing P2 team. “If you don’t get the car ‘lodged’ to the apex, you will lose a tenth or two. Not much, but it’s extremely critical for the rest of the lap, as well as your rhythm.”

Two of Sebring’s most challenging corners — Cunningham and Tower — then follow, both demanding a later apex and punishing over-eager drivers with high kerbs on the inside. After that is the high-speed run to the Le Mans corner, where a good exit is crucial to setting up the longest straightaway on the track. This is another spot where traffic can be costly for prototypes.

“You can easily lose over a second there, and most importantly compromise your exit to the Ullman straight if you don’t or can’t leave enough of a gap to the GT car,” said Puhakka.

At the end of the backstretch, a kink to the right leads into the braking zone for Sunset Bend: an ultra-wide corner with seemingly countless potential racing lines. Holding the inside can be quick, but some big bumps near the apex can unsettle a car that’s already turning hard to the right.

The exit of Sunset can create multiple problems. For one, drivers slowing on the inside for the pit entry can catch the cars behind them unaware. In addition, prototypes attempting an outside pass around a GT car may want to think twice.

“The biggest worry for us GT drivers with the prototypes is if a prototype driver decides to commit to a late pass on the outside at the exit of a long, high speed corner, when the GT car is already on power and committed to tracking out,” said David Barraclough from Torque Freak Racing’s GT team.

“This will not end well for both parties involved, and Sebring has not one but two prime danger spots for this kind of incident to occur: the first and last turns on the track!”

With that in mind, don’t be surprised to see some divebombs — perhaps an homage to its history as a World War II airfield — under braking for both turn 1 and Sunset as prototypes try to get the pass done sooner rather than later.

Based on that pace, P1 cars should lap the GT field roughly every 8 laps and the P2 field in 12 to 14 laps. P2 cars should flash also past the GTs every 14 laps or so.

For prototype teams, traffic management seems to be the biggest concern, especially on a tight track with so many new names and faces in the field.

“With a limited amount of straights, we will need to maximize passing opportunities in the safest spots and not get in a rush and end our’s or anyone else’s race,” noted the Positive SimRacing P1 teams.

“The track is narrow in many places and the first couple of stints are inevitably going to see lots of incidents,” said Mivano’s Hamilton.

Another characteristic of this circuit — its time-tested and weather-worn surface — will also challenge teams, particularly in the garage.

“Sebring is such a bumpy circuit that you really do have to think about suspension and ride heights,” said Joseph Ringrose, the manager of VRTeRacing, which is set to make its NEO debut this weekend. “It’s all about maximizing time but without destroying the car or running it too low so the floor gets damaged.”

In more ways than one, a good Sebring setup is often one of compromise.

“You want that high-speed, aerodynamic stability and surgical precision on the front end without losing too much of the mechanical grip,” noted Puhakka. “The car needs to be stable over the bumps, but it also needs to change direction well as there are multiple medium-speed complexes. It needs to have ‘bite’ and be predictable at the same time, which is a really tall order.”

Weather will also be a hot topic — pun intended — going into the weekend, as it will have a major impact on handling and potentially pit strategy.

“The invariably hot weather commonly results in quite a lot of understeer and sliding, so it’s one of the most difficult tracks to set up the car for,” said Hamilton. “Strategy is quite straightforward for the P1 class, and the high tyre degradation means no one will try to double stint tyres… though someone may try if we get crazy cool weather!”

Another key will be managing the new-season jitters. Pent-up excitement from the offseason sometimes manifests itself as over-eager driving in the season opener, and digging yourself into a hole is not an ideal way to start the season.

Last year, the Infinity Simsport HPD team was penalized for causing an incident in traffic, and after receiving a second black flag for serving the first one incorrectly, they effectively threw in the towel less than two hours into the season.

While losing time in traffic can be frustrating, veteran Hamilton said “you just need to accept your fate” when stuck behind slower cars in a bad spot rather than pushing the issue and risking a crash or penalty. Knowing when and where to make a move is about “finding the right compromise between haste and patience,” according to Puhakka.

Several off-season changes await the 55 teams headed to Sebring, the most obvious of which is seen in the makeup of the field itself. NEO is back to three classes this season with the addition of the Porsche and Audi P1 cars.

Most teams seem unfazed by the new class since they’ll do most of their passing on corner exit rather than into braking zones, but the sheer speed of the P1s will mean more interactions in traffic during each race.

In response to the off-track epidemic in recent endurance races, series officials have implemented an automated track limits monitoring system for this season. It worked like a charm in the pre-qualifying race, in which two teams were penalized for exceeding the off-track limit. While that limit has since been increased, teams can still only accumulate 10 off-tracks before receiving a warning and an additional 10 before being handed a drive-through penalty.

Last season, 13 of the 19 prototype teams and 26 out of the 29 GT teams who finished the race racked up at least 20 off-tracks. That means lots of drivers will have to clean up their acts or face some costly extra trips down the pit lane.

Finally, teams familiar with the NEO weekend schedule from past seasons will have to adjust their calendars and potentially their alarms to account for the new, condensed timetable. Gone are the Friday free practice sessions, Saturday qualifying, and Sunday slow-poking to set the grid.

Instead, the weekend will have a pair of four-hour practice sessions on Saturday, a 95-minute warm-up beginning at 11 GMT on Sunday morning, then the RaceSpot-broadcasted 20-minutes-per-class qualifying session after the drivers’ meeting.

Of course, what follows that will be a familiar sight and sound after a nearly seven months of relaxation, organization, and preparation. This Sunday, six hours of racing around Sebring will kick off yet another NEO Endurance Series season.