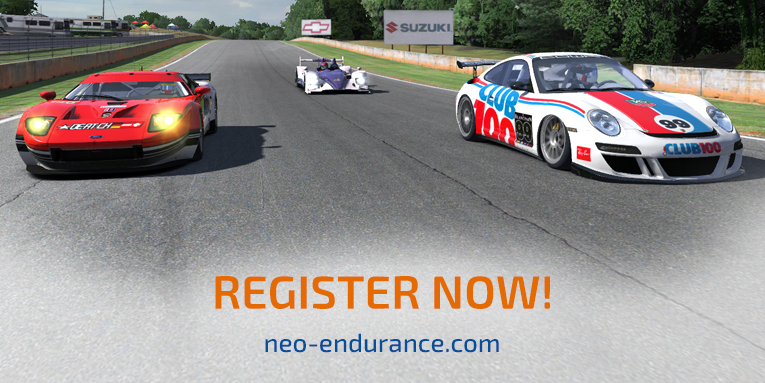 The registration for NEO Endurance Series has started. Teams can now register for one of the most challenging endurance leagues in the history of iRacing.

The NEO Endurance Series is an endurance series including five 6 hour races running from November to March. The competition in the three car classes will be tough so expect hard and fair racing all the way until checkered flag in March.
Co-Founder of NEO Endurance, Egil Sandfeld, reports that: “Teams have already begun the hard work of preparing their cars, and with the Driver Swap feature utilized we are expecting at least 150 drivers all participating in each race. It’s getting big but still fun and a great challenge no matter your level of competition.”

All races will be broadcasted by Racespot.tv. There’s even big money prizes for top teams in all classes. Read more on the details of NEO Endurance Series here: https://www.neo-endurance.com/nes-announced/

The overall registration closes on November 21st. In case of too many registered teams the latest registered will have their entry fee returned. In case a class is full (14 spots per class) we will announce which class is full. If a team registers to a class that is full the team will be offered a refund or a spot in one of the other open classes. Remember it’s first come first serve principle, which means a registration is only valid once it consists of having filled out the form and transferred the $60 correctly.

To register a team, please follow the correct application method described in rules 1.3 and 1.4 in the regulations.

Click on the link below to register a team:
Register here

Teams who completed the registration procedure can be found here on the entry list, which is updated real time.