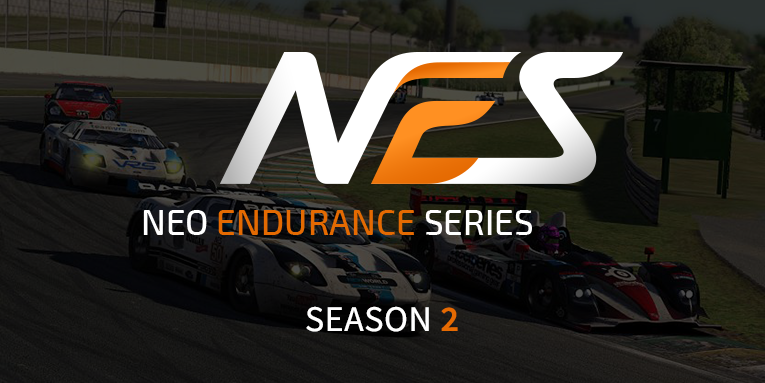 Sporting Regulations
First, the regulations for NES have been improved and rewritten. The admins started with a clean slate, took every rule one by one and reviewed it very thoroughly. When needed, rules were changed and/or improved. The structure of the sporting regulations have been rebuild and it makes more sense now.

Here are some of the biggest changes for season 2:

PRO/AM class removed
In order to make the series more simple, NEO has removed the PRO/AM structure. It was too difficult and too much work to keep this structure. All classes have no upper iRating limit anymore, but the minimum D-class iRating (2000) for all drivers remain.

New registration process
The registration process has been changed for season 2. Last season is was chaotic, due to popularity and troubles with PayPal. This season the whole registration will take longer. Teams who finished in the top 8 of its class in season 1 and the top 3 of GES, will receive an invite for season 2. New teams participate in a pre-qualifying session to show their worth with speed, traffic management and safety as main criteria. Details about this process can be found on the regulations page in the Registration Regulations document. Registrations will open later, at the end of the summer. 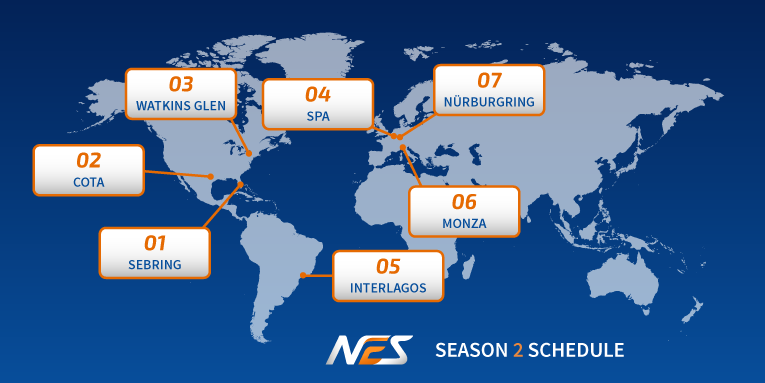 More events
As announced earlier this year, season two will be longer, with 14 hours more racing. The season has been extended to seven events.  Three circuits are new on the NES calendar: Watkins Glen, Monza, and Nürburgring.

The first three races will take place in the US. Sebring International Raceway will be again the season opener of NES 2. This time the race will be eight hours long. The second race is at Circuit of the Americas for a six hours race. The third race of the US trip is at the iconic Watkins Glen International, for another six hours race.

Details about the season 2 schedule, can be found here.
Download the NEO Endurance Series schedule as a Google calender here (ical format).

New cars
Season two introduces a few changes to the cars and classes. The RUF C-Spec and GTC class has been removed. This car will be replaced by two cars: Aston Martin DBR9 and the Chevrolet Corvette C6.R.

With the introduction of the new cars, there is a new class structure. The number of classes stays the same but the names are different. The Prototype class will still have the HPD, with its original weight meaning the ballast has been removed. The next class is GT1, with the Aston Martin and Corvette. The Ford GT will move from the second to the third class, which now is GT2. NES 2 goes back to the classic ACO/ALMS spec cars. This is a well known and proven combination of cars and classes.

More details about the cars can be found here.

Motorsport Safety Foundation
Earlier this year NEO announced that Motorsport Safety Foundation extended its partnership with NEO. MSF is a organization that wants to improve the safety standards in real life motorsport. The cars participating in NES will run with MSF decals on the car. Also NEO renamed the CleanX Challenge to the MSF Challenge. The MSF Challenge encourages drivers to drive safely during the race.