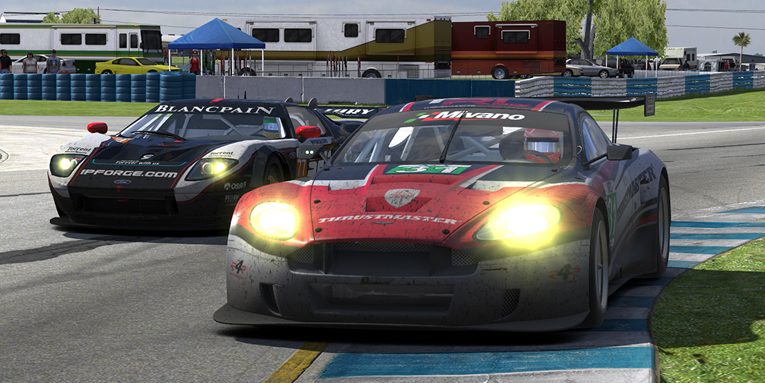 Thrustmaster Mivano Racing were entered into the NEO Endurance Series Season 2 as an already established team in GT Racing. They did not disappoint. Using their GT1 Aston Martin DBR9, they won the series by 84 points, but that would be misleading to how the season went. Their rivals, Radicals Online, Hammer Down Racing, and at some events, Team Chimera, kept them honest throughout the season They started the Finale at the Nürburgring 46 points ahead of Radicals, and 43 points ahead of Hammer Down Racing. But they came through, won the race by a lap, and won the championship.

Their highest iRating driver was Tommaso Carlà, and he was instrumental in Mivano’s victory. He made his mark in iRacing through Formula Racing, and in 2012 he won the iRacing Spec Ford Challenge, and came second in the Skip Barber Racing Series. In 2013, he took his first step into Multi-Class Racing, by coming first in the iRacing Prototype and GT Series in Season 4 of 2013, and Season 1 of 2014! His last Open-Wheel accolade was in the Star Mazda Championship of 2013, where he finished first. Whilst he won the Prototype and GT Series in Season 1 of 2014, he also won the Road Warrior Series in a HPD. Although he has limited GT history, he did have good pace during this NES season. 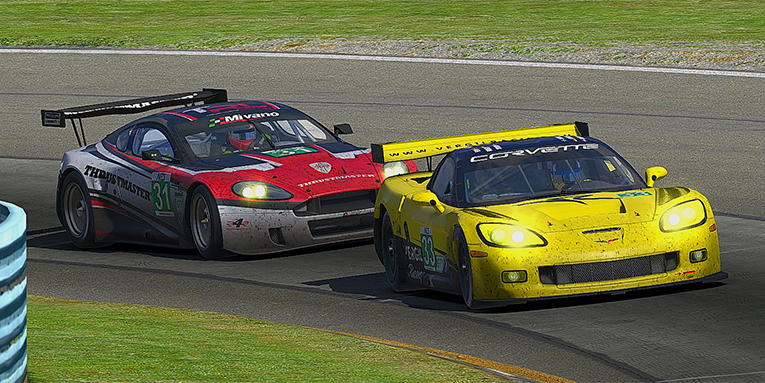 Jorge Montañés also drove in the Aston last season, and what a story he’s had. When he was 8 Jorge was given a video game by his brother for his 8th birthday. 14 years later, Jorge still thanks him for it, as it’s why he races competitively today. He started playing online games in 2008 when he got internet connection, but he only played relaxing games at this time. He went on to buy a wheel, a G25. With this, he started competitively and qualified for the 2012 GT Academy. He went through all the Spanish territorial stages but didn’t make it to Silverstone for the European Finals. When he got back home, he took iRacing more seriously, and tried to qualify for a Pro licence. Unfortunately, his laptop wasn’t good enough, as he could only see other cars’ wheels! He took a relaxing year, before his second attempt at GT Academy. Once again, he failed to reach the final step. Now, he has a better computer than before and races at the top of Open-wheel Racing. His experience of GT Academy helps him with iRacing. He hopes that he can help out his team in every way possible, and shows no sign of moving teams.

Fabio Gonzalez is a German driver who started racing since 9/10 and has been a big F1 and Endurance Racing fan since. He found iRacing in 2012 and never looked back. In 2014, he joined Mivano and has been part of their journey to the top of GT Racing. His sim racing history goes back to 1997, and since, he’s honed his skills and now is a top act in GT Racing. His only noted achievement is the Indycar Road Series Season 4 of 2014, in his first year since joining Mivano. He won that championship by 66 points to his nearest rival, and 225 points ahead of his teammate!

Round 1 at Sebring was a breeze. Mivano were cruising in the end, winning by a lap to Vortex Simracing. The Aston Martins were dominant, taking the three podium spots. And while Radicals and Vortex collided 30 minutes into the race, they stayed out of trouble and watched everyone else hit problems. At COTA Mivano won by a lap once again, holding of Hammer Down Racing and IRDK Endurance. The Corvettes were more competitive at COTA, but they tripped over each other and the other Astons while pushing for 1st. Round 3 was arguably Mivano’s worst race. They finished 5 laps down to their rivals, Radicals. Watkins Glen was a mixed track for GT1, creating the best racing with the mix of long straights and flowing corners.

At Spa, Radicals used the misfortune of Mivano to their advantage, winning the race, and were 5 tenths faster on average laptime. Surprisingly, the highest Corvette was only 3rd, even with the tremendously long straights. Interlagos was the home of Mivano domination. For the first time this season, a car won by 2 laps. There was chaos in the pack, but they drove away with their pace, and special awareness. At Interlagos, it was another mix-up between cars, providing great racing. Monza was crucial to Mivano’s NES2 victory. Radicals finished 9th, 24 laps down. And although the Corvettes took the top 3 in Qualifying, Mivano came back strong, winning once again. The Finale at Nürburgring was expected to be a Aston domination. And it was. All Mivano needed to do was finish the race without incident. And they did it in style, winning the race with fastest lap to boot.

Since the climax of NES2, iRacing have put in some changes to the GT1 cars. Beforehand, the Corvette was largely noncompetitive, because of its lack of cornering ability. So it now has an upgraded tyre compound, allowing the car to get around the corners with more confidence and pace. In other series’, this seems to have worked. The spread of Aston Martins vs Corvettes is much better than before. At likes of Sebring and Motegi, expect the Corvettes to be pushing the Top 3 at least.

This will only make Mivano’s job harder. It will defiantly be interesting to see how the Aston copes at Le Mans, because of the long straights and the fact they can’t gain as much in the corners anymore. Personally, I belive that GT1 creates the best racing, because the Aston Martin vs Corvette battle is very interesting to see play out in a multi-class endurance race.

Mivano’s victory last season is no small feat however. They’ve beaten 10 other GT1 cars, and that’s just in the series alone! There’s plenty more out there who didn’t make it because this series remains one of the most competitive in the business.