So here we are. This Sunday we will host the final round of NEO GT Series at Circuit of the Americas.

Until now the competition has been very hard, so we thought we would give you a brief subjective overview of the competition coming into this final race. The team championship standings are currently like this: 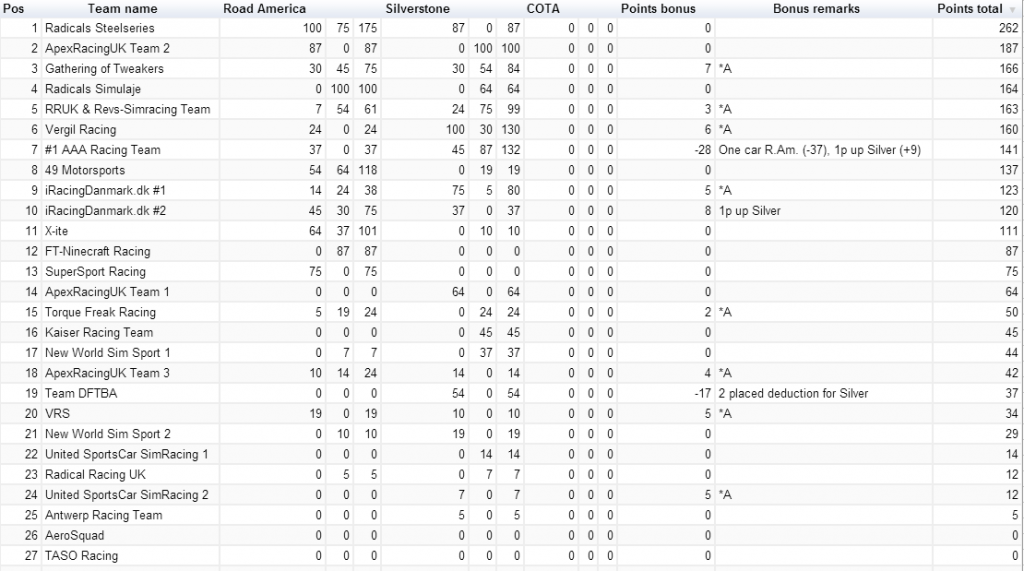 In the real contention for winning the 1st spot and about 110$ we have about 10 teams! Yes! In endurance racing anything can happen as we saw in the LMP1 category in the 24 Hours of Le Mans just recently.

iRacingDanmark.dk #1 and #2
Rounding out top 10 we have the two iRacingDanmark.dk teams of Gunner Moore + Jakob Søndergaard (120pts) and Anders Dahl + Magnus Wasteson (123pts). Both teams have done rather well bringing top 5 positions home in the PRO category. To clear the table for the final round they need to have their AM drivers getting good positions as well. A top 5 effort would seem realistic.

49 Motorsports
49 Motorsports of Amjed Yamin, Antti Tuominen + Dexter Castro, Elliott Huffman and Ayrton Ellis currently sits on P8 in the standings with 137pts. After a 4th and 5th at the first round at Road America they only secured 19 points in the Am class at Silverstone. One could imagine that when running without trouble they are definitely quick. Top 3 would be in sight if they manage to keep their liveries clean.

#1 AAA Racing Team
At P7 we find #1 AAA Racing Team of Markus Maier, Heinrich Lourens and newcomer Jim A Bolland. Remember this team has gathered 141 points from just the race at Silverstone, as the AM driver at Road America wasn’t able to connect and therefore the team couldn’t score any points at the first round. The rather famous racing academy is lethal once it’s connected, but how will the performance of the new entry of Jim A Bolland be? We’ll find out on Sunday but a overall top 3 effort could be in sight. 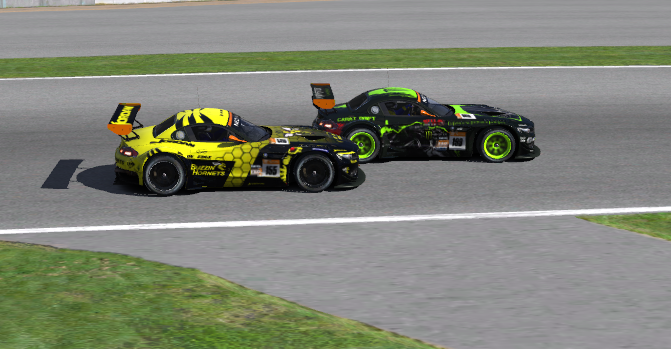 3rd to 6th position in the championships is spread by just 6 points, so anything can happen. Let’s take a closer look.

Vergil Racing
Vergil Racing holds P6 in the team championship and like #1 AAA Racing Team these guys are lethal when they run clean runs. After getting just 24 points in the first round they’ve notched up their game with a P1 and P8 at Silvestone. Do not discount these guys for an overall win. Stefan Muijselaar and Andre Heggheim makes up Vergil Racing with 160pts.

RRUK & Revs-Simracing Team
In P5 we have RRUK & Revs-Simracing Team of Mike Theunissen and Tom Stanley with 163 points. But wait! How did they get there? We haven’t seen much of this team; they’ve sort of been under the radar in the first rounds except for Theunissen’s excursions at Road America. Being under the radar is good in the endurance racing perspective as it means they for the most part have been running without any major incidents. Clean racing reflects their points except for a single non-point finish at Road America. With a steady finish at COTA they could end up P1 if the stars and planets align.

Radicals Simulaje
Radicals Simulaje of Mack Bakkum and Shaun Lees takes up 4th position with 164 points. It’s no secret that these guys may be the quickest overall, but it’s no secret either that with two non-point finishes of the PRO, they will need a new approach for the team. If they got the speed, patience is the key. The all-or-nothing strategy has proven to not be the way forward so far. Still they sit on 4th overall with a P1 at Road America and P4 by AM driver Shaun Lees. These guys could win it all if they play their cards right

Gathering Of Tweakers
The 3rd placed team of Gathering Of Tweakers is THE example of smooth, steady running will gain a steady point income. These guys are the exact opposite of Radicals Simulaje in that they have secured decent points at both Road America and Silverstone. They currently have 166 points after finishing 8th+6th and 8th+5th. It’s not top positions but this team has played the strategy of just getting some points by not necessarily going for the top positions. This strategy could take them to a overall win by the mistakes of others.

ApexRacingUK Team 2
In 2nd position we find Lee Thompson, Sebastian Job and Clive Lawrence in ApexRacingUK Team 2 with 187 points. Like Radicals Simulaje they are quick securing 1st and 2nd positions but have had non-point finishes as well. And these cost dearly in the championship standings. ApexRacingUK Team 2 definitely has the potential to take the overall win if they like P4 can keep their cars on the black stuff all the way through. 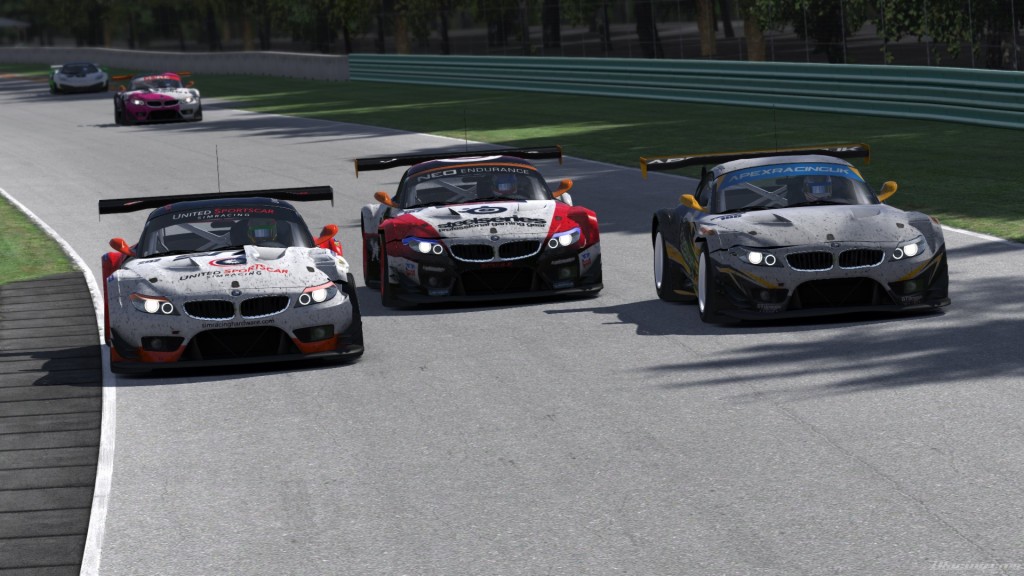 Radicals Steelseries
In the currently overall position we find Radicals Steelseries of Blake Townend and Rob Cuss. So far this team has the complete package to win an endurance championship. Townend is quick and stable, while Rob Cuss has the stable and partly quick side as well. Missing out from AM points at Silverstone, it would seem it wasn’t Cuss’ fault. With a point score of 262 they are well ahead. And for this reason they remain the favorites for the title. In fact the team only needs 126 points in the final race to win the title, which translate to e.g. a 3rd and 5th position. But Still – that’s a tough work to get up there.

To round up, anything can happen in endurance racing. Teams you would think are out of contention could suddenly be in by mistakes of others. Top 10 teams will know what it takes to secure vital points and the battle for these spots will be harder than ever before! Teams outside top 10 could still we be in contention for Top 6 and will secure them money prizes as well.

To follow this final and intense hunt for the NEO GT Series championship title tune in to http://www.live.neo-endurance.com on Sunday June 22nd at GMT 17.30

Registrations are open for NGT!